In Search of John Quincy Adams 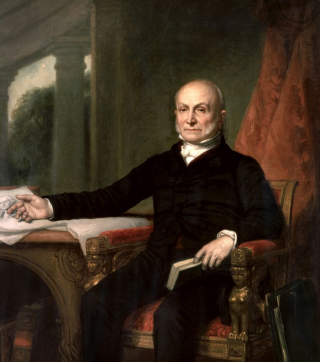 THINK OF John Quincy Adams as the Elvis of American statecraft: creative genius, preeminent practitioner and enduring inspiration. Well, make that Elvis minus the charisma.

So Charles Edel argues in Nation Builder. Edel, who teaches at the U.S. Naval War College, believes that Adams personally devised the “comprehensive grand strategy” that guided the United States for decades and “set the nation on a course to long-term security, stability, and prosperity.” The “detailed policy road map” that Adams developed sought “to harness the country’s geographic, military, economic, and moral resources,” with the ultimate aim of bringing “America to a position of preeminence in the world.”

The problem here starts with misplaced paternity. To credit Adams with fathering U.S. grand strategy is the equivalent of saying that Elvis invented rock and roll. Doing so ignores all the other worthies, predecessors and contemporaries alike who lent a hand. The King was as much product as he was pioneer. Meanwhile, what may rank as Adams’s most lasting contribution somehow escapes Edel’s notice altogether.

Raised by John and Abigail Adams—who never doubted that their oldest son was meant for greatness—John Quincy Adams lived an exceedingly consequential life, virtually all of it spent in service to antebellum America. He knew everyone from Benjamin Franklin and Thomas Jefferson to Andrew Jackson and Abraham Lincoln. As a diplomat, he was the Ryan Crocker of his day, serving every president from George Washington to James Madison with quiet distinction. Next came elevation to the post of secretary of state, followed by a term as president and, finally, seventeen years as a member of the House of Representatives. Appropriately, he died in harness, after suffering a stroke while on the House floor.

The time that Adams spent as the nation’s chief diplomat under James Monroe marked the pinnacle of his illustrious career. Edel’s account sustains the common assessment that Adams was not only the right candidate for that job, but also that he was appointed to fill it at precisely the right time. Man and moment aligned perfectly.

By comparison, the four years Adams lived in the White House surely represent his professional low point. The qualities that made him such a superb secretary of state—subtlety, prudence and constancy—did not easily translate into the hurly-burly world of electoral politics filled with backslapping wheeler-dealers. So one of our most effective secretaries of state became one of our least effective chief executives. Edel’s description of Adams’s presidency as an “abject failure” seems about right.

Yet even when he was at the top of his game, Adams was adapting a playbook that was largely the handiwork of others. Although he kept a diary that eventually ran to almost seventeen thousand pages, Adams never got around to expressing his strategic vision in so many words. He never penned a “Long Telegram.” He never published an equivalent of George F. Kennan’s “X” article.

So by pasting together what Adams said on this occasion and did on that one, Edel infers that strategy. This is a bit like divining the philosophy of Homer by taking bits and pieces from episodes of The Simpsons—a clever enough trick but not to be taken too seriously. The same can be said of Edel’s efforts at divination. As he himself concedes at the outset, “The challenge to the historian is that Adams’s grand strategy for himself and for the country was far from explicit. . . . His strategy is something that must be inferred.” It is difficult to avoid the impression that rather than an explication of Adams’s thinking, this is an exercise in ventriloquism.

THE GRAND strategy that Edel credits Adams with devising consists of several elements, which share this common characteristic: they are as recognizable as a box of Cheerios and as familiar as a Budweiser commercial. Among the key elements are these. First, steer clear of foreign entanglements, especially any that might draw the young Republic into unneeded conflicts and create division at home. Second, exploit opportunities for expansion, both commercial and territorial. Third, invest in the infrastructure and institutions needed to promote internal development. The overarching aim was clear: to enhance American security, prosperity and power. The endgame: greatness.

For early America, this was indeed an ideal framework for policy, as events soon proved. Yet Adams hadn’t invented that framework. He had merely embraced it. To claim, as does Edel, that Adams “crafted a strategy of continental expansion and hegemony” is misleading and bogus.

If American grand strategy during this era actually had an author, it was George Washington. With its warning against “passionate attachments” and its “great rule of conduct,” Washington’s Farewell Address of 1796 charted an appropriate path for a small nation entertaining big ambitions. “If we remain one people under an efficient government,” Washington wrote, “the period is not far off when we may defy material injury from external annoyance.” Neutrality today pointed toward freedom of action tomorrow, holding the promise that in time the United States would be able to “choose peace or war, as our interest, guided by justice, shall counsel.”

Even in the near term, however, the neutrality envisioned by Washington did not imply passivity. Keeping Europe at arm’s length—that’s what neutrality meant in practice—offered a posture well suited to facilitate acquisition, which was the overriding priority. The real centerpiece of U.S. grand strategy was opportunistic expansionism, acquiring by means fair or foul whatever Americans deemed worth taking. As minister to the Netherlands, Russia and Great Britain under successive presidents, Adams demonstrated considerable dexterity in facilitating this project. Yet his role was to carry out policy, not to design it. He was an agent, not an architect.

During his years as secretary of state, when he did have a direct role in policy formulation, Adams made this crucial contribution: he redefined the objective of expansionism to incorporate the entire Western Hemisphere. Control of North America, not yet fully gained, was an essential but now insufficient objective. The collapse of Spain’s New World empire meant that Latin America was up for grabs. Adams’s singular achievement, articulated in the Monroe Doctrine, was to position the United States for hemispheric hegemony, while still heeding Washington’s dictum to avoid “interweaving our destiny with that of any part of Europe.” It was a brilliant stroke, but one that grew out of the young nation’s diplomatic tradition rather than breaking with it.

Edel portrays his protagonist’s postpresidential career as a continuation and even culmination of the many years he had spent dealing with foreign policy. During his time in Congress, the aging Adams won widespread renown (and in some quarters loathing) for his vociferous opposition to slavery. Without providing much in the way of supporting evidence (because none is to be had), Edel contends that Adams’s antislavery stance represented “the final component of his grand strategy,” which “required that the United States be not only powerful, but also moral.”

As if in passing, Edel notes that Adams had shown “no hint of a desire to abolish or even restrict slavery during his presidency.” Indeed, he had “spent most of his career avoiding taking a strong stand against slavery. And when he did take a public stand, it was generally in defense of the institution.”

As a diplomatist and upwardly mobile political figure, Adams had good reason to soft-pedal slavery. If any one issue threatened the tenuous cohesion of the young Republic—not to mention a New Englander’s prospects for high office—it was slavery. To allay the suspicion of Southerners, best to keep mum.

Now, in the twilight of his professional life, realism gave way to idealism, pragmatism to passion. Adams was neither the first nor the last prominent American to discover a belated compulsion to acknowledge truths that he had spent decades denying. Truth telling is easier when it comes without penalty to the truth teller.

In opposing slavery, Edel writes, Adams was intent on making the United States “morally attractive.” For the nation to fulfill its mission as global exemplar of liberty and popular government, “it needed to revitalize its moral foundation.” The elimination of slavery would ostensibly do just that.

In his diary, Adams speculated that abolition might “cost the blood of MILLIONS OF WHITE MEN.” Yet he was not deterred. Were the Union itself to be destroyed as a consequence, he believed the price to be worth paying. In effect, to end the abomination of slavery, Adams was willing to risk everything that the nation had achieved since its founding.

The position that Adams staked out on slavery contains much to admire. But in its willingness to risk everything on one roll of the dice, it hardly qualifies as a basis for sound strategy. Fanaticism and statecraft go ill together. Indeed, one can easily imagine Secretary of State Adams urging Congressman Adams to chill out—with Congressman Adams responding by telling Secretary Adams to show some backbone.