Seattle Illustrates the Dangerous Consequences of Viewing Lawbreaking As Virtuous 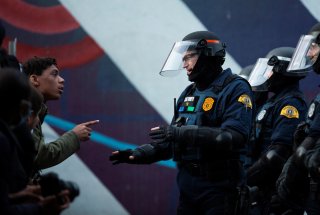 The pin may have been George Floyd’s tragic and untimely death, but the grenade that exploded America’s frayed social cohesion is something far darker. For anyone paying attention to the looting, theft, pyrotechnics, and physical violence that has taken place in America’s cities—and that continues in Seattle—it is plain to see that the rule of law is breaking down, or at least being challenged in a fashion that it has occurred in decades. There is a compound fracture between the shrinking silent majority of law abiders and its growing minority of lawbreakers. It is time for America’s law abiders to become law upholders before the rule of law breaks down completely.

America’s law abiders are invested in society. These Americans pay their taxes, own small businesses and follow the rules. While most of them are not rich and most do not own common stocks, they nonetheless believe in the rule of law and respect those who uphold it, namely the police, fireman, and local government officials and volunteers. Their version of America is under attack.

Lawbreakers are not invested in society and want to tear it down. These purported “protesters,” social-justice warriors, and progressives hold little more than contempt for societies rules. They smear America’s history and culture, mock its traditional values, and flout the laws that govern it. Their social progress is measured in smashed windows, exploded cars, and broken bones. It is only after they have shared their misery by smashing local businesses, incinerating police cars, and micturating on national monuments that they are satisfied, at least temporarily. The so-called “autonomous zone” in Seattle is Exhibit A of what will go wrong in America if lawbreaking is assigned a higher morality than observing the law.  The protesters lambasting Seattle’s liberal mayor Jenny Durkan know what they want: “Hey hey, ho ho, Jenny Durkan has got to go!” A liberalism that goes wobbly in the face of thuggery is a recipe for disaster. The stakes could hardly be higher.

The split between lawbreakers and law abiders is not new, though it is widening. For Millennials and GenXers, today’s race riots represent a politics spiraling out-of-control, hopelessly broken, and more divided than ever. In many respects, they are right except that we have been here before. The Sixties was a decade equally marred by bombings, street brawls, and assassinations of figures like Bobby Kennedy. Indeed, many of today’s deepest social wounds, ills long assumed buried and forgotten, are back because they were never really solved in the first place.

The civil discord erupting on America’s city streets happened sixty years ago too. How quickly the past is forgotten. “The evil that men do lives after them,” said Shakespeare’s Mark Antony. Then, as now, Americans found themselves in the throes of unruly student protests, race riots, and violence spilling into the public square. While no historical correlation is perfect, there are obvious analogs between the militant antiwar movement and present-day Antifa, the Black Panthers and Black Lives Matter, shootings in Watts and burning police cars in Minneapolis.

Just like in 1968, the year 2020 one of escalation. There was the sense that the country was at breaking point and in many ways it was. The lies about Vietnam shattered the trust Americans had in government. Months later, emboldened students at Columbia boycotted classes, occupied university buildings, and tussled with New York police. Hundreds more campus protests and occupations followed across the country. By April the murder of Martin Luther King Jr. unleashed emotive backlash in a hundred cities and sparked hundreds of fires.

Amidst the mélange of unstable elements and their Sixties antecedent’s today’s lawbreakers are ascendant. The coronavirus has spread pestilence and death, and social-distancing has destroyed the livelihoods of millions who are now unemployed and desperate. America’s tensions with rival China like those of the Soviet Union leave many U.S. companies uneasy and supply chains vulnerable, in some cases broken. Strained by these watersheds, America’s lawbreakers have seized upon the vacuum of uncertainty to launch their anarchy.

The year 2020 promises to be the beginning of a decade that is perhaps more chaotic than the Sixties unless America’s law abiders become law upholders. Tolerating intolerance is no way to fend off a violent mob. On the contrary, as President Donald Trump has stated, only strength can resettle the country and restore the rule of law. Lawbreakers are not interested in healing or justice and their path of destruction will not stop until law abiders demand it. Law abiders must prosecute the rabble-rousers and assailants for terrorizing their country. They must forcefully push back against misrepresentation with facts and evidence and uphold the law rather than cow-tow to mob justice.

Sometimes the spirit of an age is best expressed in the personality of its leaders and I believe this to be true for Nixon in 1968 and Trump in 2020. Both men are spectacularly divisive characters maligned by the mainstream press, hated by the Left, and distrusted by party elites alike. Like Nixon, Trump appeals to law-abiding Americans. Nixon called them the “Great Silent Majority” and Trump refers to them simply as “forgotten Americans.” In order to suppress the violence on the streets, Trump must impose a return to law and order with force, not words.

Until he does, the threat of violence will continue to ratchet up. Trump, like Nixon, is a wild card whose actions are unpredictable, often harsh in tone and softer in action. While many say that Trump is a combustible agent—the atomized fuel that detonates when mixed with the appropriate atmospherics—the joker card in America’s deck are the lawbreakers. For America to reclaim its place as a great country as it did after the Sixties, it must vehemently return to the rule of law. If Trump responds in kind, then he will win re-election and return to the White House. If he does not, then the reign of emboldened lawbreakers may be just getting started.