The Second Trump-Kim Summit Must Settle the Big Questions 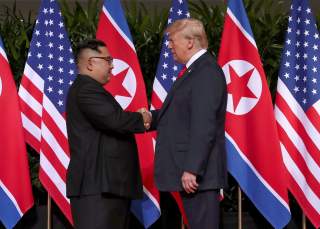 “There is no detailed definition or shared agreement of what denuclearization entails....” These words were not from critics of ambivalence in the Trump administration’s nuclear negotiations with North Korea. Rather surprisingly, they were the words of the U.S. Special Representative for North Korea, Stephen Biegun, during his speech at Stanford University last month. He had been asked whether the United States and North Korea had consensus on the technicality of the term “denuclearization.” Yet, this is only one of the many problematic ambiguities surrounding North Korean denuclearization.

Donald Trump and Kim Jong-un will be shaking hands again in Hanoi, Vietnam on February 27-28. In the past year, the two adversarial countries have striven—probably the most in the history of their relations—to move away from the brink of war toward intensive communications and diplomatic endeavors. Still, amidst widespread skepticism, Trump’s diplomatic efforts with North Korea are often criticized in Washington and elsewhere for failing to produce adequate tangible deliverables on North Korean denuclearization. Even with a number of meaningful and voluntary gestures seemingly put toward denuclearization in the past year, North Korea has yet to give a clear indication of a firm decision to completely and entirely dismantle its nuclear capability. As Special Representative Biegun conveyed, progress on the nuclear front after the Singapore summit has been minimal, inviting criticism and greater skepticism regarding the upcoming summit and the Trump administration’s North Korea policy in general.

For this very reason, the Vietnam summit is all the more purposive. Trump and Kim must resolve the divergences and ambiguities implicit in their central questions, before they can make any meaningful progress toward denuclearization and whatever measures for the progress of denuclearization.

The most urgent task at hand between the two countries is to come to a shared understanding of what denuclearization would entail. While the United States continues to reiterate its goal of final, fully verified denuclearization (FFVD), North Korea has never agreed to such a terminology but instead insists on the “complete denuclearization of the Korean peninsula,” which most certainly includes a demand for the United States to pull nuclear-armed bombers and submarines out of the radius of South Korea. This view has been shared and supported by China, while South Korea remains ambiguous.

As Biegun openly acknowledged, the United States and North Korea still need to work toward “a shared understanding of what the outcome of denuclearization is going to be” and the “steps necessary to achieve a mutually accepted outcome.” The ambiguity and obscurity of the term denuclearization only exacerbates the skepticism about both the U.S. and North Korean commitments to denuclearization. The big picture—with many unrefined details on North Korean denuclearization, both from the political and technical angles—needs to be considered carefully, extrapolated thoroughly, and agreed upon in Vietnam. This is necessary in order to create a firm foundation that minimizes potential complications and delays in future negotiations and executions.

Another critical issue that cannot be avoided in the talks between the United States and North Korea is the future of the U.S.-ROK alliance. There are mounting concerns in both Washington and Seoul that the withdrawal of U.S. troops from South Korea might be put on the table to jumpstart the North Korean denuclearization. Trump’s unilateral announcement to suspend the U.S.-ROK joint military exercises immediately after his meeting with Kim in Singapore only further intensified such concerns. The risk of U.S. troops withdrawal is becoming more worrisome, as some of the key advisers to Trump who are known alliance advocates, such as H.R. McMaster and James Mattis, have now left the administration. Trump’s unwavering intention to pull U.S. troops out of Syria, and possibly Afghanistan as well, makes the future of the U.S.-ROK alliance even more unpredictable. A U.S. withdrawal from South Korea could eventually happen as a natural consequence of both the completion of North Korean denuclearization and the establishment of peace on the peninsula. However, it should not be a tradeoff for North Korean efforts at denuclearization, as the risks of such a premature decision could only be detrimental. The Vietnam meeting should leave no ambiguity in its affirmation that the U.S.-ROK alliance is not to be jeopardized in the context of U.S.-DPRK rapprochement; nor is it to be used as a reward for North Korea’s denuclearization.

Lastly, an agreement on the basic framework of means and modalities that will be used to establish a “permanent peace regime” in Korea should be reached in Hanoi. Biegun has conveyed President Trump’s “commitment to bring an end to war and hostility on the Korean peninsula,” but the specifics of how this should be achieved are still very much abstract. Whether the means will be a peace treaty, a formal end to the armistice, a combination of both, or something yet unknown is an issue that needs to be discussed and agreed upon up front in order to avoid further confusions and complications. The establishment of a permanent peace regime, however, is not a deal that can be struck exclusively and decisively between the United States and North Korea. Here, China and South Korea will be essential. Whether it requires nullification of the armistice or an agreement on a peace treaty on the Korean peninsula, four of the players who together determined the fate of the Korean peninsula in 1953 are destined to work together again to bring in peace to the region. The Vietnam summit should serve to pave the way to establish a new process of identifying mutual interests and narrowing the gaps among these key stakeholders.

The Trump administration’s vision for a “more stable and peaceful, and ultimately, a more legal peace regime” will need to be explained fully to, and understood clearly by, the North Korean leadership. In addition, the Trump administration is also left with the difficult task of addressing North Korean concerns over whether any agreement reached with the Trump administration will survive the post-Trump era. North Korea could well be in doubt about whether any agreement signed with Trump could withstand the Democrat–controlled House. After all, North Koreans hold a vivid memory of a number of meaningful developments between the two countries at the turn of the twenty-first century, which failed in large part due to the George W. Bush administration’s Anything But Clinton policy. Given the less-than-clean track records of trust on both sides, the United States and North Korea should continue the process of trust-building by acknowledging and addressing each other’s concerns, fears, and doubts.

Diplomacy accompanies “strategic ambiguity” at times, but we are at a critical juncture where such ambiguity can be more hurtful than helpful. Both leaders should use the Vietnam meeting as an opportunity to minimize existing ambiguities and divergences in key concepts. They must work toward creating a comprehensive roadmap that lays out the specifics of their ultimate shared goal. If the Vietnam summit fails to produce the key agreements discussed above, it has a great risk of being denigrated by the critics as “just another show” played by the world’s greatest entertainers, Trump and Kim. No one knows how much longer Trump has left in office. If North Korea runs out Trump’s clock, it is very likely that the two countries will see each other back on the road where they used to be—that is, confrontation with much of the conventional constraints of adversarial diplomacy, even when they decide to talk again. North Korea should not miss this ripe opportunity to change the trajectory of its relations to the world.

Both Trump and Kim are under immense pressure to make progress on the nuclear front (a strategic gain for Trump) and the economic front (that is essential to Kim). And since the two leaders have made a drastic change of direction from confrontation to negotiation, they both need enduring domestic support more than ever to advance a diplomatic campaign. Only bold and meaningful moves that follow through on their previously shared commitments will enable a timely, historic breakthrough on the Korean peninsula and will add much-needed momentum to the diplomatic endeavors of all countries involved. Only then can America set the process toward the moment when “the last nuclear weapon leaves North Korea, the sanctions are lifted, the flag goes up in the embassy, and the treaty is signed in the same hour,” to borrow Biegun’s admittedly hopeful words.

Gi-Wook Shin is director of the Shorenstein Asia-Pacific Research Center and the founding director of Korea Program at Stanford University.

Joyce Lee is a research project manager at the Shorenstein Asia-Pacific Research Center at Stanford University.​