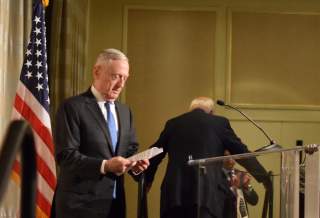 Editor's Note: These remarks were delivered by Secretary James N. Mattis as prepared for the Center for the National Interest Distinguished Service Award Dinner on July 25, 2018.

Thank you, General Boyd. I’m humbled to be introduced by a warrior with your record of valor in the most awful circumstances. It is an honor to join all you this evening. I find it hard to imagine a greater assembly of foreign policy expertise in Washington tonight.

I cannot come before you without expressing my admiration for the two chairmen of the Center for the National Interest: Dr. Kissinger and General Boyd.

I read a recent article calling Dr. Kissinger the “grand consigliere” of strategy for our nation’s leaders. From his service as a U.S. Army sergeant in World War II, where he and the greatest generation laid the bricks of America’s post-war foreign policy, to his legendary tenure as architect of much of that policy, ushering in détente during the Cold War as national security adviser and secretary of state, few can claim greater insight or influence on world history in the last century.

In a “strategy-free” time, in a city where advisors with delusions of adequacy are numerous, I am enormously grateful for Dr. Kissinger’s strategic mentorship over many years, and it builds our confidence that CFTNI counts him in their ranks. I have felled entire forests taking notes on our many conversations.

General Boyd is a dedicated, valiant officer who has lived what Supreme Court Justice and Civil War veteran Oliver Wendell Holmes called “the incommunicable experience of war.” After 2,488 days as a prisoner of war in Vietnam, General Boyd could have said “enough” and retired. No one would have questioned it. Yet he chose to remain in his beloved Air Force, ascending in leadership to guard America for another 22 years, including service as a four-star servant to our great experiment in democracy, in the very nation that Sergeant Kissinger had helped to rebuild in 1945.

For General Boyd and Secretary Kissinger, their names alone are their passports to the trust of the American people. Together, their service represents the union of diplomacy and battlefield courage, a union symbolized on the Great Seal of the United States - by the eagle turned toward the olive branch, to peace, to diplomacy; yet with arrows of ethical and ferocious military force at the ready.

This union has been the hallmark of American foreign policy from our earliest days: from 1776, when Washington’s ragged continentals fought in the field as Dr. Benjamin Franklin engaged in high diplomacy in Paris; to our own time, as the men and women of your U.S. military hold the line on the Korean peninsula, ever vigilant, creating space for Secretary of State Pompeo and our diplomats to negotiate a peaceful resolution from a position of unquestioned strength.

With Dr. Kissinger and General Boyd at its helm, the Center for the National Interest makes clear its understanding of this vital balance. And so I am honored and humbled to accept the Distinguished Service Award from an institution that seeks to advance strategic realism in our foreign policy, an institution rooted by a willingness to see the world as it is, not as we wish it to be.

As Dimitri K. Simes has written, “Even the noblest intentions can have immoral results when policy fails to match reality.” More than four decades ago, a sergeant major put it to me somewhat differently. He said, “You’re very persuasive, Mr. Mattis, but make sure you’ve done your homework or you’re going to get a lot of people killed.”

This evening, I want to share my homework, our 2018 National Defense Strategy, the first of its kind in a decade, and one that seeks to follow Dimitri’s admonition to “match policy with reality.”

In building it, we stood on the shoulders of giants like Secretary George Shultz, Senator Sam Nunn, Dr. Sid Drell of Stanford, and others. Their wisdom was invaluable. Any mistakes in the strategy, however, are mine alone. I share our military strategy because this isn’t the Pentagon’s strategy, rather it is yours, and we owe you an accounting of what you rightly hold your military responsible for.

Our world, to quote Secretary Shultz, is “awash in change.” The international security environment is as complex as I have seen it, but if we search history, we find it is not more complex than post-Napoleonic Europe after 1815 or the international environment in 1945.

Today, America is emerging from a period of strategic atrophy. While terrorism’s clear and present danger remains a significant security challenge, we recognize that great power competition, not terrorism, is now the primary challenge to our national security. Our strategy seeks to expand the competitive space and answer the challenge with three lines of effort.

First, we are restoring military readiness and building a more lethal force. Our adversaries must know: work with our diplomats, for if you threaten our experiment in democracy, if our military is called to the forefront, it will be your longest and worst day.

In this effort, Congress is now firmly in the driver’s seat, giving us direction and the finances to rebuild readiness, having lifted budget caps and provided budgetary predictability to ensure lethality. This required political courage. We in the Department of Defense are grateful that Congress recognized our nation can afford survival. A capable military is key to deterring conflict. Our military is returning to its readiness to fight and win, the best way to enhance deterrence and stability and to avoid war.

Our second line of effort has us strengthening our existing alliances and building new partnerships. It’s hard work, and Churchill said it well: “The only thing harder than fighting with allies is fighting without them.”

I had the privilege to fight for America many times; I never fought in a solely American formation. The greatest generation created these alliances to which we owe so much because history is clear: nations with allies thrive, those without wither.

Trusted and honest allies will always have disagreements on secondary issues, but those who believe today’s debates are unprecedented have not read enough history. Nothing under the sun is new; nothing we face now is harder than the strains of the Suez Crisis of 1956 or the Euromissile debates of the 1970s.

Like us, our allies have recognized the dangers looming. And from Europe to the Pacific, traditional and non-traditional partners are now spending more on defense as democracies stand together. From Nordic lands to the Indian Ocean to the Pacific, we are building stronger military ties.

Our third line of effort is reforming and modernizing the department for greater performance, accountability, and affordability, ensuring we earn the trust of Congress and the American people. For we have an obligation to spend wisely every tax dollar you entrust to us.

In 1996, I sat behind Secretary of Defense William Perry as he promised Congress an audit. Following in his footsteps, 22 years later, we will deliver the first agency-wide, comprehensive financial audit. The audit will find problems. I want to find problems.

Sunlight is a good disinfectant, and we’re going to fix every problem and come out stronger for it.

I want to close by sharing my undying respect for the descendants of those ragged continentals, the men and women of your U.S. military.

I can write a strategy. But without young, high-quality volunteers willing to look past today’s hot political rhetoric, voluntarily signing a blank check to you - the American people - a check payable with their lives, our strategy is nothing more than words on paper - even a hallucination, should we lack brave volunteers eager to put themselves into danger and discomfort for the sake of our freedoms.

To match policy with reality requires the raw human spirit of those who “seek out danger far from the well-lit avenues of life.” It requires those who put others first, who live “not for themselves, but for their country,” who follow Lincoln’s advice and “listen to the better angels of our nature.”

Where do we find such people? Go back to the Great Seal of the United States. Look at the banner at the top and the Latin words we find there: e pluribus unum - “out of many, one.”

We find these young people in the volunteers who come from every corner of our country. They keep faith with each other and with America, knowing that loyalty counts most when there are 100 reasons to not be loyal.

They know we are not the perfect guys, but we are the good guys. And they represent the best of us, as they have throughout our history.

As just one example: when was the first time a black man, a native American, a woman, and white men voted as equals in this country? On a long-range U.S. army reconnaissance patrol you and I know as the Lewis and Clark expedition.

Today we expect our military to carry on as a living model of America’s equal opportunity, meritocracy and representatives of patriotic commitment - and they live it every day. The young men and women entering the military today have grown up with the wars in Iraq and Afghanistan on the television. They have no illusions about what might be demanded of them.