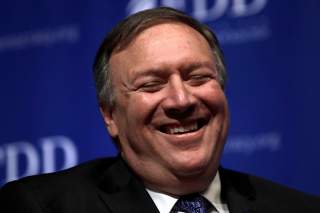 If you had to create a conservative American politician in a test tube, you might come up with Mike Pompeo, the director of the CIA. The fifty-three-year-old Pompeo is a valedictorian graduate of West Point, a Harvard-trained lawyer and former U.S. Congressman (where he represented the district in which Koch Industries is headquartered). In the Fox News era, he was a star of the Benghazi hearings that needled Hillary Clinton.

But mostly importantly, Pompeo clearly knows where his bread is buttered: he confirmed to a gathering in Washington last month that he makes a point of coming across the bridge from Langley, Virginia most mornings to personally deliver President Donald Trump his daily intelligence briefing.

His resume, proximity and panache have given him the inside lane to replace Secretary of State Rex Tillerson, should the former ExxonMobil chief step down or be ousted in the new year.

It is a remarkable ascension for a politician who was not an insider in Trumpworld this time last year, until he was given the surprise nod to head up Langley.

In his remarks last month, to the Foundation for the Defense of Democracies (FDD), he stated that “the intelligence community's assessment is that the Russian meddling that took place did not affect the outcome of the (2016) election.” The CIA issued a clarifying statement later that night, but many mainstream media outlets blasted the remark as “false” and “inaccurate.” Pompeo has since indicated his belief that Russia did meddle in the election at some level.

“I think he’s the most politically motivated CIA director since perhaps William Casey,” of the Reagan era, Harvard’s Stephen Walt tells me. “In the sense that he seems willing to sacrifice the agency’s credibility to advance his own foreign policy preferences.”

Indeed, Pompeo’s meeting with former NSA official William Binney—who discounts the official narrative on Russian interference and has publicly backed up the president on his accusation that former President Barack Obama wiretapped candidate Trump—raised many eyebrows.

Binney this year has been become a favorite of right-wing standard-bearers Sean Hannity and Matt Drudge, who have both met with the president in the White House.

There is widespread talk Pompeo “is the person responsible for leaking intelligence data which can be used to exaggerate Iran’s ties to Al Qaeda to the Foundation to the Defense of Democracies, which doesn’t sound like the actions of someone interested in diplomacy,” Scott McConnell, founding editor of The American Conservative tells me. “Pompeo is allegedly smart, so he could be a dangerous character,” argues McConnell.

“If it wasn’t him, then who did it?” charged Trita Parsi, director of the National Iranian American Council, in a phone call.

When reached for comment, the FDD pushed back forcefully against the characterization of the release as a “leak,” saying it has requested the documents’ release since 2012.

“The CIA provided FDD’s Long War Journal with advance copies of many of the files, after it was determined that they would be released, because we were the only shop calling for them to be made available,” FDD Director of Communications Joe Dougherty told me by e-mail.

Uniter of the Bannonites and the Neocons?

Pompeo is widely characterized in the press as the administration’s leading Iran hawk. Parsi, who favors continuation of Obama’s Iran nuclear deal, argued to me that Pompeo’s tenure at Langley has been “extremely unhelpful to U.S national interests” and that “the type of the policitizations we have seen in recent months have been very dangerous.”

But a future Pompeo nomination to head up Foggy Bottom holds salient benefits for the president: it could unite and enthuse most Congressional conservatives, who are largely Iran hawks.

And, his nomination would come with a coterie of defenders, forging an area of overlap between two warring factions of the GOP-followers of Steve Bannon and the neocons of the Bush era.

Bannon and his ilk frequently refer to the need for a “Jacksonian” foreign policy course—inspired, in part, by the writings of conservative intellectual Walter Russell Mead—which Bannon says President Trump is largely pursuing. One exception is North Korea—Bannon has publicly questioned the hyperfocus on Pyongyang, and has declined opportunities to clarify earlier skeptical remarks.

In a text message, a source close to Bannon enthusiastically told me Sunday that Pompeo is a “full Jacksonian.”

A source close to Bannon told me in August that the problem with Tillerson is that he doesn’t respect the president. The State Department declined to comment for this story. But that Bannonite assessment came weeks ahead of NBC’s reporting that the secretary called Trump a “moron” after a July meeting, which Tillerson has not expressly denied.

In contrast, Sebastian Gorka, Bannon’s former deputy in the White House, told me that Pompeo is “Excellent. All round.”

William Kristol, editor at large of The Weekly Standard and neocon standard-bearer, is no fan of Trump and Trumpism, to put it mildly. But the cliche that politics creates strange bedfellows holds here.

UN Ambassador Nikki Haley is also seen as a possible Tillerson replacement at State, but her stock has fallen for that role in recent months.

A former State Department official, most recently stationed in Niger, a hotspot thrust into national attention in recent months following the gruesome death of four U.S. serviceman, calls him an “instinctual ally of the neocons.”

FDD shies from the neocon label, preferring “hawkish” if a description must ascribed.

But this is all bad news for some of the earlier intellectual defenders of the rise of Trump, including Daniel McCarthy, editor at large at The American Conservative.

“Pompeo would be a step backward: he's a perfect representative of the national-security establishment mentality among Republicans. Donald Trump knows where that leads, and he won the White House last year by running against it,” McCarthy tells me by email.

Bannon and his coterie would press back.

Pompeo was elected to Congress in the Tea Party wave of 2010, which many on the Right, including Bannon, saw enthusiastically as a repudiation of both Obama and Bush. Gorka, the Bannon ally, has also spoken positively about Haley to me; Haley was also elected in 2010. But another source close to Bannon was notably less supportive.

And like many of people in the president’s orbit, Pompeo is a conservative originally from California, which many on the Right and in the Breitbart universe see as a warning-sign tale for the country writ large. A U.S. Defense intelligence official characterizes Pompeo to me as “a bizarro, inverse Leon Panetta,” the former Democratic Pentagon chief and CIA director. “California-born Italian American taking the helm of the national security establishment.”

But this official argues to me there is a price to power: “Kind of ironic that he was first elected in 2010 in this tide of Republican Tea Partiers who wanted to hold government accountable and reduce its size, and he’s ended up expanding and consolidating the power of its most unaccountable and murky section.”