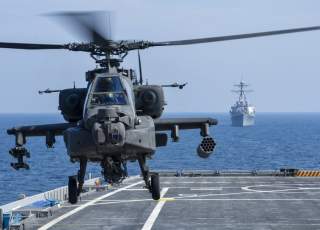 This new name reflects several important ideas for Joint Force success in overcoming A2/AD challenges. The most obvious change is to reflect that overcoming A2/AD challenges requires the integration of capabilities from all five war-fighting domains, not just air and sea. Furthermore, “Access and Maneuver” reflects the overall importance of operational access and freedom of action, while “Global Commons” identifies the scope of the new joint concept.

The JAM-GC will describe the required characteristics of a future force that can overcome the challenges of A2/AD environments in the global commons. This will include capabilities to: deploy into a theater of operation to a position where Joint Forces can be employed effectively, and with acceptable levels of risk; effectively command and control Joint Forces in a heavily disrupted electromagnetic-spectrum environment; deter an adversary from proscribed action through demonstration of capability, presence and will; conduct operational maneuver (movement in combination with fires) in an operational area with acceptable levels of risk; project power as needed to achieve objectives; and sustain and supply operations in the face of determined opposition.

Experimentation and implementation have resulted in lessons learned that support the evolution of the “ASB Concept” into a supporting concept to the JOAC. This evolution is consistent with the JOAC’s intent to adapt and develop U.S. power-projection capabilities in order to maintain operational access and freedom of action.

Work continues on developing counters to the A2/AD problem set. Collaboration among the fleets and forces, concept development staffs and service warfare centers is ongoing. In the coming months, a team of subject-matter experts and concept writers will collaborate to author the JAM-GC to capture insights and lessons learned from the initial years of ASB development. Meanwhile, the services continue to support the activities detailed in the three-year fiscal year 2015–2017 ASB implementation master plan, as well as the memorandum of understanding between the services that codifies the organizational infrastructure and senior governance structure for the ASB Office. Ties between the present multiservice organizational structure and the Joint Staff J-7 (Joint Force Development) have also been expanded and strengthened.

Through the further development and implementation of the JAM-GC, the services, working with allies and partners, remain committed to forging a closer and more resilient networked, integrated force capable of establishing and maintaining freedom of action and operational access whenever and wherever it is needed.

The authors represent the four U.S. military services in the Air-Sea Battle Office as well as the Joint Staff J-7 (Joint Force Development).