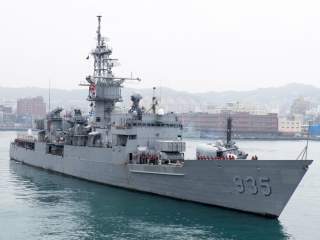 Indeed, the U.S. Navy estimates it takes 1.7 hulls of a particular ship type to guarantee that one of those hulls is battleworthy for local operations at all times. This unforgiving arithmetic means ROCN commanders can count on having seven boats—not twelve—combat-ready should the balloon go up. That’s far too few for comfort. Double or triple the Hsun Hai inventory and Taipei may have some margin to absorb the inevitable battle losses small-craft mariners will suffer. More is better.

Expanding the fleet will take resources, needless to say. To make the budgetary figures work, Taipei could and should boost the island’s defense budget beyond the paltry 2 percent of GDP it spends. That’s barely enough to put the armed forces on a sound peacetime footing, let alone enough to face down Asia’s strongest indigenous military power. President Tsai could also order the navy leadership to siphon resources from major warships—in effect Taiwan’s luxury fleet, pricey but mostly frivolous—into small combatants. Or, preferably, she could do both. Better a surplus than a deficit of naval capability when survival’s at stake.

To double back to where we started, it’s not enough to change the composition of a fleet, substituting one type of man-of-war for another. Getting the material component right is necessary but far from sufficient. Tactics, operational practices and doctrine have to evolve along with strategy. For the Taiwan Navy, that will mean breaking the navy’s love affair with capital ships meant to command the sea. Learn to love small craft!

It will also mean reforming habits. Officialdom, for example, must break senior commanders’ habit of exercising tight central control over ship and aircraft crews. Centralized command is unwieldy, inflexible command, wholly unsuited to guerrilla war at sea. In that vein, revising Taiwan’s maritime strategy will also mean grooming a generation of small-craft skippers, along with crews steeped in enterprise and derring-do. Senior commanders must empower seafarers to fight independently, free of close supervision from headquarters. Martial enterpreneurship must become the watchword for offshore operations.

In short, reorienting Taiwan’s maritime strategy will mean waging a cultural revolution, with the bareknuckles bureaucratic approach drastic change implies. Modifying career incentives to instill maritime guerrilla-warfare traits is a must. That’s how you embed a new culture in an institution. And political leaders must demand results from ROCN mariners. Recruiting new blood to replace officers and seamen who can’t part with old ways will likely prove unavoidable, judging from past naval services forced to reinvent themselves on the fly.

This undertaking will demand constant, resolute, and, yes, presidential leadership. Hmm. Someone should write a book about this.

James Holmes is Professor of Strategy at the Naval War College and coauthor of Red Star over the Pacific, named Essential Reading on the U.S. Navy Professional Reading List. The views voiced here are his alone.