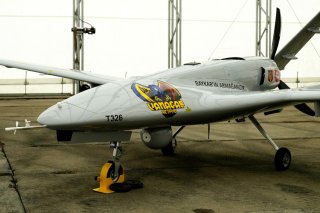 Russia’s invasion of Ukraine has triggered a strange new phenomenon: People from all over the world are crowdfunding purchases of materiel, such as commercial off-the-shelf drones and unmanned aerial vehicles (UAVs), and gifting them to foreign militaries.

Since the start of the Russo-Ukrainian War, dozens of crowdfunding initiatives have been launched to raise money for a variety of military supplies and equipment including helicopters, SUVs, medical kits, and demining equipment. However, the majority of these campaigns have focused on drones, ranging from cheap commercial quadcopters to UAV systems complete with ground control stations and data and remote display terminals, generators, and trailers. It has become so prevalent that the Ukrainian government has termed the phenomenon “dronations.”

Social media and financial technology are facilitating these crowdfunding efforts but why is there such a focus on purchasing drones? Three reasons likely explain crowdfunding interest in drones. First, drone technology isn’t new but as UAVs have reached operational maturity, they are being used in innovative ways that capture the public imagination. Second, drone technology is multi-use which means that it can be used for non-combat purposes as well. Finally, drone footage spreads across social media like wildfire, essentially digitizing warfare and sparking even more public interest.

A Desire to Help

While campaigns and grassroots efforts are a common way to raise funds for humanitarian crises (including the humanitarian response to the Russian invasion of Ukraine), raising millions of dollars for weaponry is an almost entirely new facet of interstate war. The closest historical precedents lack the scale, external involvement, focus on purchasing weaponry, or are government-driven. The most recent similar example lies in the aftermath of the Eritrean-Ethiopian War at the turn of the century when the Eritrean government raised $25 million to support armed groups fighting against the Ethiopian government.

During World War II, private citizens purchased war bonds to “do their part.” The British government also launched the “The Spitfire Fund,” raising about £13m (which is worth £650 million today) to purchase over 1,500 fighter planes thanks to public donations. The Spanish Civil War is a classic example of foreign volunteers rushing to join the fight but examples of civilians donating funds specifically for weapon purchases are rare. The closest example would be the American Civil War, where local communities and individual volunteers raised regiments of their own, providing not only soldiers but sometimes uniforms and weapons as well.

The desire of individuals and communities to “do their part’ is driving this new aspect of modern warfare. Today, this direct assistance is made possible by social media, the mass availability of dual and multi-use technologies (such as commercial drones), and online banking and currency platforms that can facilitate cross-continental payments and financial exchanges. Along with affordable technology, these developments have created a unique situation that enables everyday people from around the world to fund an interstate war.

The ability to purchase and transfer these capabilities has been facilitated by the evolution of financial and banking technologies. Cryptocurrency and crowdfunding websites, such as Pomogam, the Polish equivalent of GoFundMe, have helped facilitate fundraising efforts, cross-currency payments, and financial transfers to Ukraine. After only a month and a half of fighting, crypto donations to Ukraine had surpassed $60 million, raised either through direct donations or the sale of non-fungible tokens (NFTs). Similarly, by mid-March, the National Bank of Ukraine had raised over $40 million via Google pay, credit card payments, and direct bank transfers to support the Ukrainian Army and humanitarian needs.

Beyond cryptocurrencies and online payments, fundraising platforms are also playing a role. This month, Polish citizens started a campaign on Pomagam to raise funds to purchase additional Polish-made Warmate loitering munitions for the Ukrainian armed forces. To date,  the campaign has raised over 1,400,000 złoty, or more than $290,000 with a target amount of $850,000, enough to purchase twenty Warmates. Readers scrolling through Pomagam’s website will see that campaigns to raise funds to purchase equipment for Ukrainians fighting on the frontline are commonplace.

Crowdfunding has become a noticeable element of the Russo-Ukrainian War. At the beginning of the summer, Kalush Orchestra, the Ukrainian rap group that swept this year’s Eurovision Song Contest, auctioned off their iconic crystal microphone trophy (along with an NFT version) and the pink bucket hat worn by frontman Oleh Psiuk to raise money to purchase three of the Ukrainian-made PD-2 uncrewed aerial systems for the Ukrainian armed forces. The band raised over $1.2 million and turned the funds over to Serhiy Prytula’s charity to procure the equipment.

In May, Laisves TV, a Lithuanian internet broadcaster, in coordination with the country’s defense ministry, similarly raised $5.4 million for a TB2 drone in less than four days thanks to a crowdfunding effort largely supported by small denomination donations. Impressed by the effort, the drone manufacturer Baykar offered to donate it, with the original funds going to arm the drone instead. In early July, the Lithuanian government presented the TB2 drone that it transferred to Ukraine.

Since the emergence of these large-scale viral campaigns, similar smaller crowdfunding and grassroots efforts specifically intended to purchase weaponry and materiel for the Ukrainian military have proliferated. For example, for just $100, donors can have a message written on a mortar shell to be used against Russian forces. The proceeds have already led to the purchase of an Autel Evo 2 Pro drone for mortar personnel; the second round of donations is going to be used to purchase a second-hand hexacopter drone with a high digital zoom camera. A better camera will allow for reconnaissance from a greater distance, reducing the likelihood of losing the drone and increasing Ukrainian forces’ field of vision.

Some crowdfunders have even formed organizations with exclusively drone-centric missions. The group Eyes on Ukraine, for example, aims to “get as many drones as possible over the places in Ukraine where fighting is going on, so the truth will not perish.” These organizations highlight that drones are specifically requested by the Ukrainians because they keep soldiers farther away from the frontlines.

However, it is not only Ukrainian forces who are benefiting from crowdfunding. The Russian military has also raised funds for various materiel and received donations of commercial off-the-shelf drones to be used for reconnaissance and as aerial vehicle-borne improvised explosive devices.

The Maturation of Drone Technology

Modern military UAV technology is nothing new. Drones have demonstrated their utility on the battlefield since Israel’s victory over the Syrian air force in 1982. Drones have cemented their role in warfare with demonstrated successes in reconnaissance and targeted strikes and have been employed in nearly every conflict since then. However, their extensive and innovative use during the Russo-Ukrainian War and the 2020 Nagorno-Karabakh War arguably marks a shift in the use of military-grade UAVs and civilian drones during combat. More specifically, it highlights how the cost of autonomy has decreased significantly.

As technologies mature, they often reach an inflection point where they become robust, efficient, small, and affordable enough to be used by a broad range of operators for a variety of tasks. In 1965, Intel co-founder Gordon Moore argued that roughly every two years the number of transistors able to fit on a microchip would double. This essentially meant that computer speed would grow exponentially until it eventually plateaued. The spirit of Moore’s Law, however, can be applied to many emerging technologies today.

The cost per unit of military drones has decreased dramatically in the last five years alone. For example, the medium-altitude long-endurance (MALE) Predator drone, which first entered service in 1995, costs about $40 million a unit. The Israeli Hermes 900 drone costs as little as $18 million per unit, depending on the configuration. Today, the Turkish Bayraktar TB2, which was first introduced in 2014, costs less than one-third of its initial price at a modest $5 million a unit. While no two systems are exactly the same, and technical specifications vary widely, the underlying core technology, and the role these drones play, are comparable.

The decreasing costs of fielding an armed drone, and the growing willingness of states to export them, have reduced significant barriers to entry for states looking to acquire these capabilities. This makes drones not only a worthwhile investment but also a practical tactical choice, as they become a more common and non-precious asset on the battlefield. Affordability engenders experimentation and allows for tactical innovation to flourish.

Battlefield experimentation quickens the absorption of “lessons learned” and encourages the exploration of new operational concepts. For example, the use of TB2s by the Ukrainian Air Force to target Russian landing craft near Snake Island in the Black Sea was unconventional, as UAVs have mainly been used for targeting ground troops and vehicles. Similarly, the Russian military has also experimented with UAVs by repurposing their Orlan-10 reconnaissance drones to carry and release high-explosive fragmentation projectiles, such as VOG-25 grenades, on unsuspecting targets.