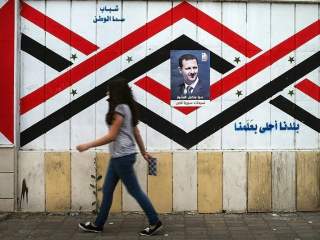 Since the cessation of hostilities began in Syria, activists in several cities have once again begun taking to the streets. What is telling is that in a number of the communities the activists have been brandishing the flag of the moderate Free Syrian Army (FSA), a repudiation of both the Syrian government and Al Qaeda affiliate Jabhat al-Nusra.

Many times it is small underreported events, like these citizen-led street protests, that can signal a pathway out of what has become an intractable civil war. What the street rallies may be revealing to us is that despite the dominance of radical jihadist groups like ISIS and Jabhat al-Nusra over the battlefield during the course of the war, a large swath of Syrian society sees neither these radical groups nor Assad as part of Syria’s future. This may indicate that while the jihadist groups have flourished during the most intense fighting, the future may lie with the more moderate mainstream opposition groups.

The signal Washington should be receiving from this is that Russia’s involvement and the extremely fragile cessation of hostilities have created a new strategic reality, which could allow the United States to regain its lost footing in Syria, escalate its efforts against ISIS and secure a strong negotiating position in future political transition talks. The United States should seize the opportunity to bring mainstream Syrian opposition forces, like the FSA, to bear in the war against ISIS, and then use the leverage that comes from liberating ISIS-controlled areas to exert influence on a future political transition process in Syria. To the degree that the recent street rallies are reflective of overall public sentiment, mainstream opposition groups like the FSA have the potential to translate future battlefield wins against ISIS into political support on the ground. Washington needs to take note of this, develop a strategy around it and keep the talks in Geneva and the fragile cease-fire going as long as possible, so as not to miss what might be a narrow window of opportunity.

Let’s look at how this opportunity arose and what the United States should do to take advantage of it. Prior to Russia’s military involvement, Washington’s war against ISIS had been strikingly detached from its policy towards Syria generally, and its anti-Assad stance more specifically. While the United States gave heavy air support to forces of the Syrian Kurdish YPG in the battle against ISIS, it never gave a similar level of support to the opposition rebels who were trying to release Syria from Assad’s grip. This disparity in support was mostly due to misalignment between the goals of the United States and the Syrian opposition. Washington had a singular focus on degrading and defeating ISIS, while the top priority of the mainstream opposition was to topple the Syrian government.

But Russia’s sudden military foray into Syria last September to buttress the Assad regime, and its more recent support for the cessation of hostilities, froze the battlefield dynamics such that neither Assad nor the rebels could make significant gains by attacking each other. Part of this “freeze” came about as a result of the cease-fire, which troublingly seems to now be fraying. But it also comes from the reality that while Russia is committed to the survival of the Syrian regime, there may be limits to its support for an open-ended conflict. Moscow’s announced partial withdrawal seems to be designed to send this signal to Assad. But on the rebel side, Russia’s continued support for Assad communicates that direct attacks against the government are unlikely to lead to its demise.

This dynamic potentially alters the priorities of both the Syrian government and the mainstream opposition, shifting hostilities away from each other and towards ISIS, which not being party to the cease-fire agreement is now fair game. In other words, with the conflict in the western part of Syria partially frozen due to Russia’s involvement, the center of gravity of the civil war is likely to now shift eastward to ISIS controlled areas, which now becomes a new venue for competition between the Syrian government and the opposition. What this means is that whoever is successful in liberating territory from ISIS potentially wins the greatest competitive advantages in the broader battle for Syria. The sudden rush to liberate Palmyra from the clutches of ISIS by the Syrian government (with Russian air support) may signal that Assad understands that the power balance is likely to tilt towards whichever side is able to demonstrate the greatest progress in defeating ISIS.

What this points to is that the United States should expect a race to retake Raqqa, ISIS’s de facto capital in the north. The problem for the United States is that it doesn’t have sufficient ground forces in Syria to really ramp up its battle against ISIS. Unable until now to motivate the FSA and other mainstream Syrian opposition groups to divert significant attention away from battling the Assad regime to fight ISIS, the United States has relied on Syrian Kurdish YPG militias as its ground troops in the battle against ISIS. But there are limitations to what the United States can achieve by aligning itself solely with the YPG. While effective in routing ISIS from areas with large Kurdish populations, the KPG will likely run into problems if it tries to liberate Sunni Arab majority territory from ISIS, particularly strongholds like Raqqa or the hotly contested area of Deir al-Zour.

In an attempt to address this deficiency, last fall the United States supported the integration of the Kurdish YPG into the Syrian Democratic Forces (SDF), a broader coalition which also includes Arab Christians and Arab Sunnis. While this initiative makes sense in theory, the reality is that the new hybrid SDF is heavily dominated by the YPG, making it unattractive to many Arab Sunnis whose aims are a united Syria, and take umbrage at Kurdish declarations of autonomy. Because of this, even if the SDF is able to liberate Arab areas from ISIS, it is unlikely to have the legitimacy needed to govern, especially as the battle moves deeper into the Arab heartland. Moreover, the SDF is problematic for Turkey, which sees it as a YPG wolf in sheep’s clothing.

Washington needs to make the case to the mainstream opposition that with attacks against the Assad regime likely to be ineffective for the time being, the priority should shift to liberating territory from ISIS, the logic being that gains against ISIS can be later converted into a stronger position against Assad. As part of this, the United States should augment the support it already gives to the Kurdish YPG and the Syrian Democratic Forces in the battle against ISIS with support for “vetted” factions of the Free Syrian Army. In recent weeks FSA units have participated in anti-ISIS operations in the northwestern pocket of Manbij, near the Turkish border, with U.S. air support. This kind of activity needs to be expanded on with active U.S. support, particularly while the cease-fire is partially holding.

If the United States is successful doing this, the contrast with the Syrian government’s position in a race for Raqqa is striking. The further east the Syrian government pushes against ISIS, the more attenuated will likely be its support from regional allies. There is little indication that either Iran or Hezbollah, which have provided the shock troops for the Syrian military advance of late, have the capability or the will to expand the fight into the eastern part of the country in a bid to defeat ISIS. While Russia may continue to lend air support to Assad’s attacks on ISIS, the lack of adequate ground troops will make any final bid to defeat ISIS difficult.

Let’s assume the United States is able to redirect the efforts of the FSA, and that this is successful in degrading ISIS. How does the inclusion of the FSA ultimately translate into leverage against Assad and the Russians? First, it gives the opposition the opportunity to prove it can generate legitimacy in the liberated areas. Defeating ISIS is only half the battle; a legitimate governing force has to be able to fill the political vacuum that remains after ISIS has been routed. While it is hard to know where the political loyalties will lie among civilians in areas liberated from ISIS, the rallies in Idlib, Aleppo and Damascus suggest that the FSA has an opportunity to generate support. What is a more sure bet is that defeats against ISIS could enhance the legitimacy of the FSA in other strategic areas like Idlib Governorate, which has been a stronghold for Jabhat al-Nusra, but where the recent rallies seem to indicate the FSA has some legitimacy. Moreover, victories against ISIS by the moderate opposition will challenge Assad’s false dichotomy narrative—that he is the only alternative to Syria falling prey to jihadist Islamic groups. By demonstrating to the Syrian people that there are alternatives to Assad and the jihadist groups, the opposition reinforces the notion that Assad is the problem, and can’t be part of any long term solution.