The Self-Assured Hubris of the World’s Human-Rights Abusers 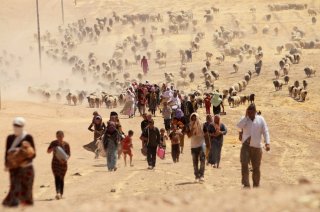 The United States withdrew from the United Nations Human Rights Council in 2018, after years of trying to reform the agency came to naught. But even though the United States. is no longer a member, the council still sits in judgment of our country, through its Universal Periodic Review (UPR). This is the process whereby the council reviews the human-rights practices of every country.

Typical of the still-unreformed council, however, the UPR process does not yield an objective assessment. Rather, it’s a Kabuki dance designed to establish a false moral equivalence between the world’s worst human-rights abusers and countries like the United States.

The third cycle of the UPR began in 2017 and lasts for four and half years. The review of the United States was this week. During the first two cycles of the UPR, both occurring under the Obama administration, the United States received more recommendations (668 total) than any other country for how it should improve its human-rights practices. Blatant human-rights abusers Cuba and Iran could muster only a distant second (534) and third (511), respectively.

Criticism of China was even more muted in those cycles. Beijing received only 422 total recommendations, fewer than those made for countries like Australia, Ireland, Israel, and, of course, the United States.

It’s not just the number of recommendations but the tenor of the comments from other countries that jars the sensitivities—and beggars the belief of those truly committed to advancing human rights. Human-rights violators use the UPR, not only to malign free countries but to praise each other. Consider some recent UPR reviews:

In its third review in 2018, China received more recommendations (387) than it did in previous reviews, even though it received far less scrutiny than merited, apparently with the complicity of the UN human-rights system. According to Human Rights Watch:

[T]he review was marred by the UN’s own complicity with China’s quest for a critique-free review. While accepting—seemingly without question—contributions from groups that praised China’s rights record, UN officials removed without explanation the submissions from Hong Kong, Tibetan, and Uyghur groups that are critical of Beijing. Many of the excluded contributions were reinstated at the eleventh hour, but the damage was done.

China’s UPR was replete with praise from likeminded countries, resulting in a shameful “review” for a non-democratic country committing gross human-rights abuses in Xinxiang and denying its citizens fundamental rights of free speech, freedom of religion, and freedom of association.

By contrast, the U.S. review on Nov. 9 was a steady stream of criticism and calls to change its policies, many of which extend back decades.

Repressive regimes were eager to use the process to accuse the United States of crimes they themselves perpetrate. Questions released in advance included Syria, Iran and China asking what measures is the United States taking to “ensure that their territories and other territories under their control are not used for the recruitment, assembly, financing, training, protection and transit of mercenaries and terrorists” to “stop arbitrary murders across the globe” to “eliminate systematic racism, racial discrimination, white supremacy, religious intolerance and xenophobia” and to “end mass surveillance around the world and stop undermining the security of other countries and the freedom of expression.”

However, even nations that respect human rights took the opportunity to criticize the United States, often taking their cues from extensive criticism submitted to the UPR by human-rights groups. Repeated points included the U.S. failure to ratify various human-rights treaties, treatment of migrants, rights based on sexual orientation and gender identity, the death penalty, abortion, and establishing a national human-rights institution. There was also condemnation expressed over the U.S. Commission on Unalienable Rights because it did not endorse the notion that all rights, even if the United States does not recognize them as such, are equally important and indivisible.

Of course, the United States is not only a sovereign nation but a free one. Unlike countries such as China, the United States is committed to letting its people speak freely and voice criticism of its government, history, and actions. U.S. policies are thankfully implemented by representatives elected by the American people, not by UN bureaucrats in Geneva or diplomats representing other governments.

Nonetheless, the United States can take criticism and was willing to listen and reflect upon the comments of other countries—some offered sincerely, most not—in the UPR. As noted in the U.S. UPR report:

Notwithstanding our political differences with the Human Rights Council and with the views and human-rights records of some of its members, we welcome the opportunity to share the story of how our nation’s ongoing commitment to the protection of human rights works in practice.

While commendable in spirit, this accommodation to the Human Rights Council is counterproductive. It is not about shutting down criticism, because whether the United States participates in the UPR or not, criticism will be voiced loudly and without restraint at home and abroad. It is about legitimizing an insincere process and allowing repressive nations to point to the UPR as evidence of how much “progress” it has made—as China did while simultaneously committing crimes against humanity.

But that is the point. Most countries want to act like they care about human rights while doing little in reality and the Human Rights Council is the perfect venue to accomplish that illusion. The fact that human-rights abusers find it so easy to be elected to the Human Rights Council—China, Cuba, and Russia were elected to the Council last month—says everything necessary about how much the UN membership values the work of the council and human rights.

U.S. participation in this farce implicitly approves of this cynical sham.

The United States will likely set a new record for recommendations for improving its human-rights practices after its third review is complete. That, naturally, implies that the U.S. human-rights record is the worst in the entire world. Does anyone seriously believe this? What does it say about a process that arrives at this conclusion?

What is needed is a UPR that does not elevate politics over human rights and a Human Rights Council whose membership is not comprised of the worst abusers in the world and which objectively promotes human rights and condemns violations.

Former vice president and presumptive-president elect Joe Biden has pledged to rejoin the Human Rights Council and “work to ensure that body truly lives up to its values.” This is the same tactic used by President Obama, which as the United States admitted failed to yield even “minimally positive” results. Reengaging the council without reform will only affirm the inclinations of other governments to continue the deplorable status quo.

A mandatory review of the Human Rights Council is required between 2021 and 2026. The next U.S. administration should insist that the review be conducted promptly and use the opportunity to challenge UN member states to improve the membership, eliminate anti-Israel bias, and implement other reforms that would allow the council to live up to its lofty mandate. The success or failure of this endeavor will reveal whether other member states actually want the council to “live up to its values” and whether the council itself merits U.S. engagement.