Is Selling Tanks to Saudi Arabia Such a Good Idea? 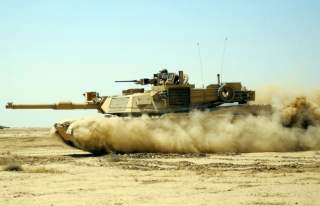 Washington has made another major arms sale to Saudi Arabia to replace tanks destroyed in the war in Yemen. The sale underscores the Obama administration's deep role in backing the Saudi-led coalition fighting the Houthi rebels as the war is escalating.

The State Department this week notified Congress of an impending sale of 153 M1A2 Abrams main battle tanks and twenty heavy tank recovery vehicles plus assorted ammunition, weapons and other kit to the Saudi army. Buried in the fine print of the notification is the statement that twenty of the Abrams tanks are intended to replace tanks destroyed in combat. The only place Saudi tanks are in combat are along the Saudi–Yemeni border in the Kingdom's southwest where the Houthi rebels have been surprisingly effective in striking targets inside Saudi Arabia since the start of the war sixteen months ago. It's probably a good bet that more than just twenty Saudi tanks have been damaged. The Kingdom has an inventory of 400 Abrams.

Since the start of the war, the Zaydi Shia Houthis have released videos of their troops destroying Saudi tanks and other targets with missiles. They have also shelled towns inside the Kingdom, some of which have been evacuated. Yemeni troops loyal to the Houthis ally former President Ali Abdullah Saleh have launched Scud missiles at Saudi airbases and other targets. The Saudis have used Patriot missiles to intercept at least a dozen Scuds, and this week reported two more ballistic missiles were intercepted by Saudi defense measures.

The Houthis have been a thorn in the Saudis’ side for over a decade. Before the Arab Spring toppled Saleh, the Houthis fought a series of small border clashes with Saudi forces along the border and generally got the best of the fighting. The Houthis have their own strongholds right across the border in Sa'ada province.

Another indication of the war's cost to Riyadh came last month when the Grand Mufti and President of the Senior Islamic Scholars Abdul-Aziz Al ash-Sheikh, the top Wahhabi cleric in the Kingdom, called on private firms, banks and businesses to donate money to help support the families of soldiers killed in the war and on the country's universities to give "martyr" children free tuition. He also appealed for donations to help the border towns under attack. This appeal underscores the expense of the war and the government's challenge in paying for what is an open ended quagmire.

The tank deal is only the latest in a series of arms sales to the Kingdom since the Saudis announced the start of Operation Decisive Storm last year. The Royal Saudi Air Force has received billions in munitions and spare parts to keep up its aerial bombardment of Yemen. Without U.S. and UK support and logistics, the RSAF would be a diminished war machine.

President Barack Obama has been the most enthusiastic arms salesman to Saudi Arabia in American history. All told sales on his watch total over $110 billion. None has provoked a serious challenge on the Hill. Only Senator Chris Murphy from Connecticut has called for greater scrutiny of the arms relationship with the Kingdom.

Riyadh was the first Arab capital Obama visited as president. He has visited Saudi Arabia more than any other country in the Middle East including Israel. The relationship has been bumpy but lucrative.

The UN backed peace process in Yemen has all but collapsed. Four months of talks brought no breakthrough. Saudi Arabia argues that it is supporting the legitimate elected government that replaced Saleh and it has the backing of the UN Security Council. The monarchy emphasizes that the war has prevented an Iranian takeover of Yemen. Playing the Iran card keeps up public support for the war and rallies the bulk of the Arab world behind it. It greatly exaggerates the Iranians role in Yemen, but that is not the question for King Salman. He can use an Iranian threat indefinitely knowing Tehran will always engage in enough mischief to justify Saudi and Gulf fears.

The losers in the war are of course the Yemeni people. More than half the twenty-five million people are malnourished. Many are dislocated. Children are at greatest risk. The war gets almost no mention in the American media, but it's our war.