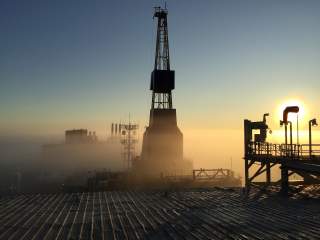 U.S. crude oil exports could reach 800,000 barrels per day (bpd) in 2017, exceeding the amount shipped by Organization of the Petroleum Exporting Countries (OPEC) Ecuador, Gabon, Libya and Qatar, according to analysts polled by Bloomberg. The amount shipped could reach even higher levels if the Trump administration succeeds in easing drilling restrictions and helps the industry maximize output. America shipped 527,000 bpd in the first eleven months of 2016, according to Energy Information Administration data. The administration expects U.S. output to reach more than nine million bpd this year after dropping 5.6 percent last year to 8.87 million on the back of falling prices. With restrictions on U.S. crude exports lifted in 2015, American producers can target buyers in Asia, Europe and Latin America, which are seeking alternative suppliers after OPEC and non-OPEC producers agreed to curb output.

“Godzilla is even taller in person,” Vikas Dwivedi, senior analyst at Macquarie Capital, told Bloomberg. “U.S. production will be bigger than most people are expecting.”

Macquarie reportedly sees U.S. annual output reaching 9.37 million, compared to the 9 million estimate by Turner, Mason & Co. and Lipow Oil Associates and the 8.75 million tipped by Wood Mackenzie. In a December 2016 report, the energy consultancy said the global oil and gas industry could turn cash flow positive in 2017 should OPEC production cuts drive oil prices above $55 per barrel. Wood Mackenzie expects U.S. independent producers to increase investment by more than 25 percent if prices stay above $50. Mackenzie said producers have the advantage of “access to capital; cost-advantaged portfolios; and flexibility to scale back spend sharply if prices stay low.” While America continues to import crude, including from OPEC, more exports are likely from the Permian Basin and Eagle Ford Group regions of Texas. U.S. refiners prefer the high-sulfur, high-density crude oils produced overseas compared to that produced in the expanding Texas industry.

“If the U.S. system can’t take the crude it produces, it will have to export it,” Dwivedi said.

OPEC has a poor record on keeping its promises of production cuts, as previously noted by the National Interest. Yet already, the cartel has reportedly delivered around 80 percent of the production cuts promised in December. Should it maintain compliance, U.S. producers will gain a stronger foothold into international markets, further strengthening the export push. In January 2016, Sinopec Corp., China’s state-run oil refiner, bought its first ever batch of U.S. crude oil, which came after Congress lifted a four-decade ban on domestic exports. In February, the first major U.S. gas shipment set sail for Brazil. U.S. gas was even sent to the energy-rich Middle East, a move described by Britain’s Financial Times as akin to “sending coal to Newcastle.” A Sinopec source described the landmark U.S. crude shipment as positive for the industry. “U.S. crude oil exports are positive news for the global market, and make it possible for Asia-Pacific refiners to diversify their supply if the crude is economically competitive,” the source said.

Apart from some sporadic, minor shipments, China imported virtually no U.S. crude outside of a brief surge of cargoes from Alaska in the late 1990s, which was exempted from the ban. Congress imposed restrictions on U.S. oil exports in 1975 after the Arab oil embargo, preventing oil drilled from any state other than Alaska from being exported overseas. In 2016, twenty-two countries imported American crude, marking a more than 1,000 percent increase since 2009, when Canada was the only export destination. Nevertheless, the United States remains a significant importer, importing last year around ten times more oil than it exported.

However, the American industry will have to balance its production surge with the need to keep prices at profitable levels. Oil prices closed at their lowest level in more than three weeks Thursday, after record U.S. crude inventories were seen outweighing OPEC’s production cuts. While OPEC output fell in February to 32.17 million bpd, down 65,000 barrels from January, U.S. stockpiles surged to 520 million barrels, the biggest jump since 1982.

“There’s record storage in the U.S., which can’t be ignored,” Bob Yawger of Mizuho Securities USA, Inc. told Bloomberg. “Prices are stuck in a range and drifting quickly to the bottom end of it.”

The benchmark West Texas intermediate price dropped to $52.61 a barrel on the New York Mercantile Exchange, after trading between $51.22 and $54.94 in February. Meanwhile, Russian output was unchanged in February, with its cuts just a third of the levels pledged by Moscow under the OPEC agreement.

“There’s very high conviction that OPEC is complying . . . the question is what’s the offset from U.S. producers and how much compliance you get from non-OPEC producers,” investment strategist Rob Haworth told Reuters.

President Trump has given the American oil and gas industry a significant boost, which may see further production growth. Just three days into his presidency, he signed executive orders advancing the Keystone XL and Dakota Access pipeline projects. And if anyone had any doubt as to the new administration’s support, former ExxonMobil chief executive Rex Tillerson is Secretary of State, with former Texas Governor Rick Perry appointed Energy Secretary.

Nevertheless, hedge fund and money managers’ bullish bets on U.S. crude oil surged to a record in the week to February 21, according to data from the U.S. Commodity Futures Trading Commission. The Energy Information Administration’s latest forecasts point to the United States becoming a net energy exporter by 2026, or even earlier should favorable geology and technological developments aid production and prices remain high.

Geopolitically, the continued boost in U.S. oil and gas output and resulting exports threatens to challenge OPEC, weaken Russia’s control of the European gas market and make America the new global energy superpower. But the American industry will have to be wary of overextending its newfound gains, as markets are watching just how far U.S. production climbs even while OPEC cuts.