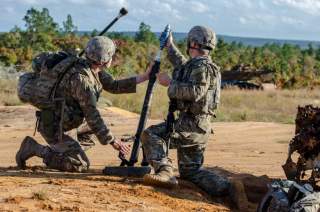 Speaking at the Reagan Defense Forum in Simi Valley last Saturday, Secretary of Defense Ashton Carter said the United States must do more in the fight against the Islamic State (ISIL) in Syria.  The fundamental strategy for inflicting “a lasting defeat to ISIL,” he said, “is to identify then train, equip, and enable local forces that can keep the peace.”  Those trained local forces, he added the next day, were the key to victory as was demonstrated in Iraq and Afghanistan.  But did training local forces in Iraq and Afghanistan prove to be the key to victory, and can it do the same in Syria against ISIL?  Short answer: no and no.

To assess the chances of any military operation to be successful, a sober and honest evaluation must be made of three things: the type and capability of friendly troops; the quality of the opposition; and the environment in which the battle must be waged.  The political leaders who make the go/no-go decision on the use of force must ascertain the likelihood their troops can attain the political objective sought, and whether the cost to attain that objective is worth what might be won.

The analysis may reveal that the friendly forces would be able to secure the objective, but discover the cost would likely be greater than what they would win – or greater than the cost of having taken no action. In a 2009 Armed Forces Journal article, military theorist Douglas Macgregor wrote that before choosing to use force, leaders must identify specifically what they want to accomplish with the military, how they propose to employ it, and what the end-state might reasonably look like.

He argued that such an analysis “involves knowing when to fight and when to refuse battle.”  This current consideration of expanding the number of trainers on the ground in both Syria and Iraq indicates many of our top military and political leaders appear unwilling to conduct such analysis or don’t have the moral courage necessary to admit when something won’t work.

The general concept sounds reasonable on the surface: don’t send your guys to fight on foreign soil, but train up the local forces so they can win the battle with American support and air power.  The truth of the matter is American trainers can only enhance – slightly – the capabilities of any friendly military force.

In the summer of 2014 Iraqi troops melted into the desert sands when ISIS troops stormed and then captured Mosul. Of that battle, the Military Times reported “the (ISIS) force that specifically seized the city of Mosul this week probably totaled about 800 fighters. That force overpowered two Iraqi Army divisions totaling about 30,000 troops.”  In 2008 I visited training units in Mosul in preparation for a team I would lead to Iraq the following year training Iraqi border troops.  The Iraqi units’ 2014 failures did not in the least surprise me.

In both 2008 and 2009 I saw highly qualified and motivated US troops train Iraqi soldiers – who were at best moderately interested in being trained. Scores of American training teams spent years trying to teach combat and leadership skills to the Iraqi troops and did see some improvement. But it was only marginal – and not near enough to stave off disaster in 2014.

The consideration of expanding the training to rebel groups in Syria would have an even smaller chance of success. The men making up the various rebel groups in Syria are mostly civilians – shopkeepers, bakers, businessmen, teachers – pressed into service owing to the destruction of their way of life.

Many are motivated and dedicated.  But they are starting from a point of virtually zero understanding of what it takes to be a professional and disciplined military organization.  Given enough years, American trainers could likely increase the effectiveness of the rebels, but marginally only.  It is highly unlikely – regardless of how many men and how many years we train them – that the rebels would ever be cobbled into an effective field army that could defeat the Syrian regime.

Instead, the best we could hope for is to improve their fighting ability and equip them with some modern weapons – which might be enough to avoid outright defeat.  Such would likely ensure the continuation of the civil war, deepen the humanitarian disaster and perpetuate the suffering of the civil population.

But it would not achieve victory.

How does it serve the national interests of the United States to lose some number of American lives, spend hundreds of millions training so-called “moderate rebels”, and in the end not change the strategic balance as it exists today?

Again I must ask: if a fairly straightforward analysis of a military course of action shows that it will not achieve national objectives, what is the rationale for expending national treasure and risking the lives of our citizens in the attempt?  We need military and civilian senior leaders who are willing to make the hard call and refuse to send American forces into a battle they cannot win.  And it’s time for Congress – with the Constitutional obligation to raise and maintain the military – to start asking harder questions.

Daniel L. Davis is a widely published analyst on national security and foreign policy. He retired as a Lt. Col. after 21 years in the US Army, including four combat deployments.  The views expressed here are those of the author alone and do not reflect the position of the U.S. Government.