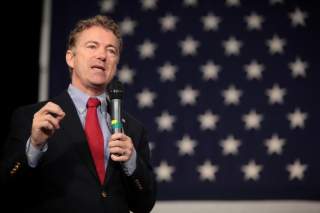 Sens. Rand Paul and Chris Murphy, both members of the Committee on Foreign Relations, appeared at the Center for the National Interest Monday, September 19, to argue against a $1.15 billion arms sale to Saudi Arabia. The senators, along with Utah Republican Mike Lee and Minnesota Democrat Al Franken, are the cosponsors of a Senate resolution blocking the sale.

The senators’ proposal comes in the eighteenth month of Saudi Arabia’s U.S.-backed intervention in Yemen. There, American forces help refuel the Saudi planes whose bombs often strike civilian targets, including hospitals and other sites of humanitarian relief. This is despite ostensible U.S. support in aiming weapons toward legitimate combatant targets as well. Thousands of civilians have died since the intervention began.

As a result, said Senator Murphy, “if you talk to Yemenis on the ground, they will tell you that this is a U.S. bombing campaign.” And besides the unwelcome association of the United States’ reputation with an increasingly aimless war, both senators wondered what Washington’s continued involvement signaled about its other priorities in Saudi Arabia and the Middle East in general.

Dov S. Zakheim, former under secretary of defense and CFTNI’s vice chairman, wondered about that too. “Would Congress be sending even more mixed signals to the Saudis than they’re already getting?” he asked the senators. Both replied that, as things stand, Washington does too little to exercise leverage over its military aid, which Senator Paul noted has cost $100 billion in the eight years of the Obama administration. In fact, added Senator Murphy, the Obama administration has seen a “six-to-eightfold increase in the dollar amount” of military aid to Riyadh compared to the Bush years. Consequently, “we should be sending signals to the Saudis that our support for them is conditional.”

Paul derived the other part of his argument from the Constitution itself. “The initiation of war was specifically taken away from the presidency and given to Congress” by the framers, he said. And more than just a transaction between allies, in Paul’s reading the United States’ behavior in Yemen, refueling planes, sharing intelligence and assisting with targeting, constitutes complicity in acts of war. “We are actively part of a war in Yemen, and I think almost no American knows that we’re involved.”

The Arms Export Control Act, a 1976 law, provides the grounds for the Senate to force a vote on a sale by the president. Paul and Murphy see the move—as well as the recent passage of a bill allowing 9/11 victims’ families to sue Saudi Arabia, vetoed by Obama—as a sign of a “new bipartisan consensus” willing to publicly debate the dysfunctional U.S.-Saudi relationship, as well as America’s involvement in Yemen, expensive and barely acknowledged. Though they recognized the relative unlikelihood of accomplishing their goal, both senators emphasized the need for transparency and public accountability of military actions funded by U.S. taxpayers.

Both senators also questioned the 2001 Authorization for Use of Military Force, targeting the instigators of the 9/11 attacks, which has given a broad legal umbrella to American military activity in the Middle East over the last fifteen years. No updated AUMF, they pointed out, has been drawn up to target ISIS—and certainly none to support Saudi Arabia’s war in Yemen. Paul and Murphy each outlined the conditions that they would attach to a refreshed military authorization, limiting U.S. action to a particular scope of time, geography and tactics.

As Paul pointed out, limiting the extent of an AUMF to as little time as a year is a valuable exercise in determining the extent of support for a given U.S. military action. “People say, ‘gosh, why would we come back every year? Congress is so messy, you’d never get them to vote for anything.’ But when we’ve been attacked, we’ve been pretty unanimous. . . . So I really don’t worry about, in times when our national interests are clearly affected, us being able to vote for something in Congress.”

Added Senator Paul, “The other times have been less clear.”