Serbia and Kosovo Could Clash amid Increasing Tensions 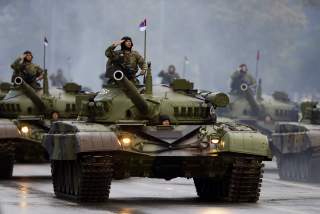 On Thursday, Reuters reported that the Serbian military launched an assault on insurgent positions to the east of Belgrade in Pasuljanske Livade. These operations were presided over by the close supervision of President Aleksander Vucic and a handful of foreign observers. Fear not, this operation was all part of a military drill, aptly named Synergy 2018, and those insurgents under assault outside of the Serbian capital were only imaginary assailants.

But with this military exercise close on the heels of the Kosovo police using force on Serbs in the town of Kosovoska Mitrovica, and the arrest and subsequent expulsion of an EU negotiator, the fear is that the exercise could be a harbinger of an even darker chapter in the relationship between Pristina and Belgrade.

To make matters worse, back in January, an influential Kosovo-Serb politician Oliver Ivanovic, was killed in a drive-by shooting by unknown assailants in Mitrovica, the first assassination of a Serbian politician in over a decade. Vucic immediately called an emergency session of the National Security Council and declared the assassination to be an act of terrorism. The Ivanovic assassination highlights the recent progression of tensions between Serbia and Kosovo.

Reuters further explained that Vucic and his top Army commander, Gen. Ljubisa Dikovic, were quick to dismiss any notions that Thursday’s training exercise was posturing towards Kosovo, stating emphatically that Synergy 2018 had long been on the military calendar for the 2018 year.

Defense analysts have a tendency to grant too much importance to military drills and large-scale exercises. In recent memory, Western officials like Germany’s Ursula von der Leyen​ sounded the alarm about Zapad 2017, the joint exercise of Russia and Belarus, to practice defending against a NATO-like adversary. But in the former Yugoslavia, particularly between Pristina and Belgrade, these alarms may not be entirely unfounded, as things are going from bad to worse.

Since Kosovo declared independence from Serbia in 2006, Serbia has adopted a policy of formal neutrality. While members of NATO’s Partnership for Peace, Serbia has held ambitions of joining the larger European and International communities in the form of European Union membership. However, with the failures of Brussels over the last few years, regarding the refugee crisis, debt crisis, etc. many Serbs have begun to question if they will ever be allowed in to the elite club of European nations, or if they even want to be in that club.

While the Serbs retreat from Brussels, they fall into closer orbit with the Russian Federation, with whom they already share a set of commonalities: a largely orthodox population, Slavic heritage, and a coming to grips with the collapse of their former nation and loss of much of what was once their territory. Russia, seems a much more kindred spirit and is likely more attractive to the population, particularly considering the air-campaign launched by NATO against Serbia. A recent example of this alignment with the Kremlin when following the unrest in Kosovo, Vucic is reported to have called Moscow for advice.

Kosovo on the other hand, has firmly retreated into the arms of the Alliance, and must rely on the political and military institutions of the Transatlantic system for their ambitions of statehood and regional peace. But Kosovo interrupted that peace, when their police force was mobilized against Serbs in their territory and detained a Serbian official. These disruptions could be a spark that starts a much larger fire.

In such a once hot area, the fear is that this old flashpoint in the Balkans is brewing back up. What has changed in the equation this time is a Russian nation deeply at odds with the West and as seen in the recent Montenegrin elections has a willingness to intervene in the Balkans, and to exert their influence. Russia’s dangerous and reckless behavior could embolden the Serbians to react to one of Kosovo’s provocations, and considering the presence of Alliance soldiers in region, the West could quickly be drawn in to another conflict it does not want in the former Yugoslavia.

Time will tell but an exercise of this nature, just days after Kosovo used force against Serbs, is a clear signal to Pristina, whether intended to be or not. Thus, the hope is that this rapidly escalating situation was just an inconvenience of scheduling and not the signs of a coming proxy war in Europe, which would rapidly involve outside forces. Rather than panic over a denigrating situation, defense analysts should see the progression as a controlled escalation through a symbolic powerplay, and not as an omen of impending doom.

Michael R. G. Lyons is a DC based researcher, who has focused on Security issues in Europe and the Middle East.