In Serbia, Russia Is Down But Not Out 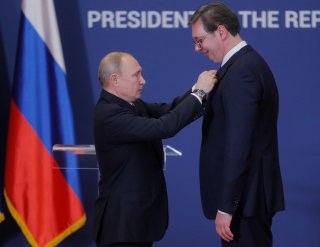 Serbia and Kosovo recently experienced a minor security crisis. The Kosovo government despatched special police units to border crossings to require drivers with Serbian license plates to put on temporary plates when entering Kosovo. Serbs living in northern Kosovo protested and blocked traffic while Serbia deployed armored vehicles and fighter jets near the border. The manufactured crisis was a display of chest pumping motivated by the desire of both governments to accumulate nationalist credentials while they await an electoral cycle. The European Union (EU) eventually resolved the dispute, as the two sides agreed to de-escalation measures and technical, EU-mediated talks to address outstanding license plate issues.

But Russia used this drama as an opportunity to reemerge in Serbian affairs. Accompanied by the Serbian defense minister Nebojša Stefanović and Chief of the Joint Staff of the Army of Serbia Milan Mojsilović, the Russian ambassador to Serbia Alexander Botsan-Kharchenko visited a Serbian army garrison, which is close to Kosovo and in a state of increased combat readiness. Russian Foreign Ministry Spokesperson Maria Zakharova expressed Russia’s concern over the situation while taking jabs at the Kosovo government and the North Atlantic Treaty Organization and EU for failing to resolve the crisis. Serbian president Aleksandar Vučić also met with Ambassador Botsan-Kharchenko to consult on Kosovo. This latest set of events presented Russia with an opportunity to return to Serbia after a period of crisis in their relations, demonstrating that, while Russia’s influence in the country is diminished, it is not gone.

In 2020, Serbo-Russian relations experienced a rough patch, and Russia was dealt several setbacks in the country. Namely, Russia was displeased that Vučić tried to resolve the Kosovo dispute with the help of the Donald Trump administration. This decision by Serbia meant the loss of one of Moscow’s last assets in the Balkans. The unresolved Kosovo dispute leaves Belgrade politically dependent on Moscow and its United Nations Security Council veto. Moreover, for Moscow, this decision was a sign that Belgrade wanted to pivot toward Washington. During this period, it also became evident that Serbia replaced Russia with China as its primary non-Western partner.

Before that, in July 2020, Serbia experienced violent anti-lockdown protests. The pro-government tabloids and media accused pro-Russian players of instigating the unrest, which signifies that the Serbian government was willing to use Russia as a scapegoat to curry favor with the West. In September 2020, Serbia also canceled the Slavic Brotherhood, a military drill with Russia and Belarus, announcing a six-month moratorium on all international military exercises.

A question also arose concerning whether the Socialist Party of Serbia (SPS) and its pro-Russian leader Ivica Dačić would join Serbia’s ruling coalition again. Dačić remained the chair of parliament, but so did the tensions that surfaced in October 2020 when another pro-Russian member of the SPS, Dušan Bajatović,  the director of Serbia’s state-owned natural gas provider, Srbijagas, clashed with the pro-Western energy minister Zorana Mihajlović.

However, the circumstances shifted again in Russia’s favor. After making a failed bet on Trump’s reelection, Vučić now fears Joe Biden’s presidency as he expects this administration will take a tougher stance regarding the Kosovo dispute, declining the rule of law in Serbia, and his ties with Russia and China. Consequently, Serbia has partially repivoted toward Russia to secure Moscow’s diplomatic protection—Belgrade has undertaken a whole set of steps in this direction.

In the UN General Assembly in December 2020, Serbia voted against the condemnation of Russia on the issue of Crimea. That same month Russian foreign minister Sergey Lavrov visited Belgrade. On that trip, Lavrov laid wreaths at the Memorial Cemetery of the Liberators of Belgrade and flowers on the grave of the Patriarch Irinej of the Serbian Orthodox Church, who recently passed away from the coronavirus. Both occurrences sent powerful and emotionally charged messages.

But the most powerful sign that Belgrade is rekindling ties with Moscow came on January 1, 2021, when the Russian pipeline project TurkStream became operational, ensuring that Serbia and neighboring Bosnia and Herzegovina would remain dependent on the Russian gas supply. Conspicuously, pro-Western energy minister Mihajlović did not attend the ceremony, unlike the pro-Russian Bajatović. Serbia, in particular, cannot relieve itself of energy dependence on Russia; since 2008, Russia’s Gazprom has owned fifty-one percent of the shares of the Serbian national oil and gas company Petroleum Industry of Serbia (NIS). This is an arrangement that some have interpreted as a partial payoff for Russia’s support of Serbia on Kosovo. As icing on the cake, in May 2021, Serbian and Russian special forces conducted a counterterrorism exercise. Belgrade will also send an ambassador to Syria, Russia’s ally in the Middle East, to please Moscow.

The domestic dynamics in Serbia play into Russia’s hands as well. The sensitivity of the Serbian public to the Kosovo issue forces Serbian politicians to oppose Kosovo’s independence, and, for that, they need Russia. Moreover, Russia and its president, Vladimir Putin, remain popular in Serbian public opinion. Overt anti-Russian policies are avoided to avert losing the support of pro-Russian voters. Instead, politicians try to balance and also play Russia and the West against each other as a tactic to win the votes of both pro-Western and pro-Russian voters. This domestic dynamic is complicated and does not only require sensitivity to the Kosovo issue but also to the popularity of Russia and the SPS’s participation in the ruling coalition.

There is a silent political struggle between Vučić and his former top lieutenant Defence Minister Stefanović. To keep Vučić on the constant defensive, Stefanović conducts his own balancing between Russia and the West. In June 2021, the British Telegraph reported that the United Kingdom’s defense secretary Ben Wallace, during his visit to Serbia, signed an agreement with Minister Stefanović on countering Russian meddling. Both the UK embassy in Serbia and the Serbian Defence Ministry denied the reports, but one can still imagine the unpleasantry Vučić experienced as he wants to preserve a balance between Russia and the West. Now, Stefanović visits the army garrison accompanied by the Russian ambassador, which the West certainly did not overlook. If he veers too close to the West, Vučić will be embarrassed in front of his conservative constituents but too close to Russia, and Vučić will be embarrassed in front of the West, whose acquiescence he needs to stay in power. Stefanović played this card, and it suits the Russians.

Apart from traditional tools of Russian influence in Serbia and the Balkans, which are the Kosovo dispute and the use of energy and soft power to win over the local populations, a new avenue of influence has also opened up for Russia—its coronavirus vaccine Sputnik V. In an arrangement with Russia, Serbia commenced production of the Sputnik V vaccine on Serbian soil. This production alongside the production of the Chinese Sinopharm vaccine is making Serbia a regional hub for vaccines in the Balkans, which gives Serbia the ability to conduct its own vaccine diplomacy by donating vaccines to its neighbors. Serbia also conducts its vaccine diplomacy globally by donating Russian Sputnik V vaccines to developing countries in Africa, the Middle East, and Asia to ensure they do not recognize the independence of Kosovo.

Serbo-Russian ties have been downgraded, but they are not fully eliminated. It is unlikely that there will be any spectacular news in this partnership like when Putin attended a military parade in Belgrade in 2014 or when thousands of Serbs gathered to greet Putin in front of Orthodox Saint Sava Temple in 2019. Putin has not forgotten how Serbian leadership tried to swindle him when they thought the West would give them a better bargain. However, the outlined factors will ensure that Russia remains a player in Serbia that cannot be written off; the license plate crisis in Kosovo shows that Russia will use any opportunity to assert itself in the region.

Furthermore, Serbian elites will use Russia to project an image internationally and domestically that Moscow has their back. Recently, Serbia’s pro-government tabloids put out a cover story discussing the special plan Putin has for the Balkans and Serbia that involves Russia designating the Balkans as a region of priority for its foreign policy. In truth, the Balkans are anything but a priority for Moscow, but Belgrade will invoke the Russia card whenever it needs international leverage or domestic spin. As the recent EU-Western Balkans summit failed to provide a timeline for the region’s accession to the block, Serbia has an additional motive to keep Russia around. During the summit, Vučić stressed that Serbia was right to maintain ties with Russia because it would not face an energy crisis this winter like those countries who succumbed to the pressure of those objecting to Russian energy projects. Serbian leadership feels vindicated in its decision to hedge its bets with Russia, China, and others. Russia is down but not out in Serbia. It will wait for its chance and, when the opportunity arises, make its move—as it always does.

Vuk Vuksanovic is a researcher at the Belgrade Centre for Security Policy (BCSP) and an associate of LSE IDEAS, a foreign policy think tank of the London School of Economics and Political Science (LSE). He got his Ph.D. in international relations at the LSE. He published widely on modern foreign and security policy issues.