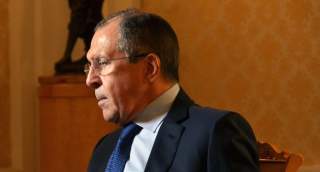 Paul Saunders, associate publisher of the National Interest, interviewed Russian foreign minister Sergey Lavrov on Friday, March 24, 2017, in Moscow. Their wide-ranging and blunt conversation, which lasted over an hour, covered topics from Ukraine and Syria to the 2016 U.S. presidential election and the future of U.S.-Russia cooperation.

Question: I’d like to start by asking you about your forthcoming meeting with U.S. Secretary of State Rex Tillerson; we’ve read in the press that the two of you may be meeting soon.

Sergey Lavrov: So they say.

Question: Could you perhaps tell us about your expectations and goals in dealing with Secretary Tillerson?

Sergey Lavrov: Well, after the American election, soon after Election Day President Putin and President-elect Trump talked over the phone. It was a good but very general discussion touching upon the key issues in our relations, and of course the key international issues. And they agreed that they would continue being in touch, and after the inauguration they talked again, and they reconfirmed the need to look for ways which would be effective in handling international problems. And of course to see what could be done to bring the bilateral relations to normalcy. They also agreed that Mr. Rex Tillerson and I would look into the agenda in some more details, and would also discuss the preparation for the presidential meeting which should take place when both countries, both leaders feel comfortable.

And we met with Rex in mid-February in Bonn on the margins of the G-20 ministerial meeting, and covered quite a lot of the bilateral agenda. I briefed him about the relationship on bilateral issues with the Obama administration, the problems which accumulated during that period. We did not go into the substance of this, I just briefed him so that his team, which is still being assembled, could take a look at these issues and determine what kind of attitude they would have on them. And we discussed Syria, Iran, the Korean Peninsula, the Middle East in general, relations between Russia and the West. It was a very general, but rather substantive discussion, obviously it was the first contact and Mr. Rex Tillerson is just getting into the shoes of his new capacity. We discussed the possibility of personal meeting and have been continuing these discussions. As soon as we finalize them it will be announced.

Question: Of course. If I could follow up on your answer there, you mentioned bringing normalcy to the U.S.-Russia relationship. What do you think “normal” is?

Sergey Lavrov: “Normal” is to treat your partners with respect, not to try to impose some of your ideas on others without taking into account their own views and their concerns, always to try to listen and to hear, and hopefully not to rely on a superiority complex, which was obviously the case with the Obama administration. They were obsessed with their exceptionality, with their leadership. Actually the founding fathers of the United States, they also spoke of their leadership, and they believed that the American nation was exceptional, but they wanted others just to take the American experience as an example and to follow suit. They never suggested that the United States should impose, including by force, its values on others.

And the Obama administration was clearly different. Actually, long before Ukraine, long before Crimea, in early December 2012, there was an OSCE ministerial meeting in Dublin. And Hillary Clinton was secretary of state and was the head of the delegation, we had a bilateral meeting with her, she was trying to persuade me on something which was a difficult issue on the agenda, but I recall this situation because in the margins of this ministerial meeting she attended a meeting in the University of Dublin, and she delivered a lecture in which she said something like: “We are trying to figure out effective ways to slow down or prevent the move to re-Sovietize the former Soviet space.” December 2012.

What kind of action she was considering as the move to re-Sovietize the space, I really couldn’t understand. Yes, there were discussions about Ukraine, about Kazakhstan, Belarus and Russia, forming the Customs Union, and if this was the reason, then of course it showed very obviously the real attitude of the Obama administration to what was going on in the former Soviet space and the area of the Commonwealth of Independent States, its obvious desire to take over this geopolitical space around Russia without even caring what Moscow might think.

This was the reason for the crisis in Ukraine, when the U.S. and European Union bluntly told the Ukrainians: either you are with us, or you are with Russia against us. And the very fragile Ukrainian state couldn’t sustain this kind of pressure, and what happened happened: the coup, and so on and so forth (if you want I can discuss this in some detail later). But my point is that they considered normal that the people in Obama’s team should call the shots anywhere, including around such a big country as the Russian Federation. And this is absolutely abnormal in my view.

At the same time, when we visited Venezuela with our naval ships, they were raising such hell, as if no one could even get closer to what they believe should be their backyard. This mentality is not adequate for the twenty-first century. And we of course notice that President Trump is emphasizing the need to concentrate on U.S. interests. And foreign policy for him is important as long as it serves the United States’ interests, not just some messiah projects doing something just for the sake of showing that you can do it anywhere. It’s irrational, and in this he certainly holds the same position as we do in Moscow, as President Putin does, that we don’t want to meddle in other people’s matters. When the Russian legitimate interests are not, you know, involved.

Question: You just mentioned at the end of your statement that the United States shouldn’t meddle in others’ affairs, and obviously many Americans today feel that Russia has meddled in American affairs, in the 2016 election. Your government has denied that. But how do you explain what happened in the United States? Do you feel that Russia had any involvement or any responsibility at all for what transpired?

Sergey Lavrov: I believe that these absolutely groundless accusations—at least I haven’t seen a single fact that this was substantiated. I believe these accusations were used as an instrument in the electoral campaign, which for some reasons seemed to the Democratic Party to be an efficient way to raise support among the American people, playing on their feelings that no one shall meddle with American affairs. This is a Russophobic instrument. It was a very sad situation because we never wanted to be unfriendly with the American people, and apparently the Obama administration, the elite in the Democratic Party, who made every effort during the last couple of years to ruin the very foundation of our relationship, decided that the American people should be brainwashed without any facts, without any proof. We are still ready to discuss any concerns of the United States.

As a matter of fact, in November 2015, long before this hacker thing started, we drew the attention of the U.S. administration to the fact that they kept hunting Russian citizens suspected in cybercrime in third countries, and insisting on them being extradited to the United States, ignoring the treaty on mutual legal assistance which exists between Russia and the United States, and which should be invoked in cases when any party to this treaty has suspicions regarding the citizen of another one. And this was never done.

So what we suggested to them in November 2015, that we also don’t want to see our citizens violating law and using cyberspace for staging all kinds of crimes. So we would be the last one to try to look aside from them. We want them to be investigated and to be disciplined. But since the United States continued to avoid invoking this treaty on legal assistance, we suggested to have a meeting between the Justice Department and the Russian prosecutor-general, specifically at the expert level, on cybercrime. To establish confidential, expert, professional dialogue to exchange information.

They never replied; when we reminded them that there was a request, they orally told us that they were not interested. But in December 2016, more than one year after our request was tabled, they said, “Okay, why don’t we meet?” But this came from Obama administration experts, when they already were on their way out. Some technical meeting took place; it was not of any substance but at least they responded to the need to do something about cyberspace.