Settle Crimea with a Referendum 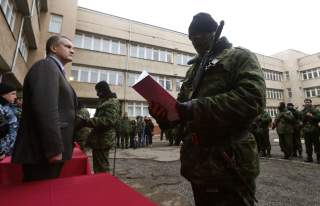 President Donald Trump’s policy remains schizophrenic. The administration imposes new sanctions on Moscow shortly after his Helsinki summit with Russian President Vladimir Putin. The U.S. president won no plaudits for his performance, yet he had the right objective—to improve relations with Moscow.

Putin is no friend of liberty or America, but his country poses little threat to either the United States or Europe. Moscow’s actions against Ukraine forestalled the North Atlantic Treaty Organization’s eastward advance rather than presaged Russian aggression westward. For Putin to start a war even against the seemingly vulnerable Baltic States would offer few benefits but incur great risks. To directly confront America or “Old Europe” would be suicidal. Indeed, as President Trump apparently recognizes, despite his inartful way of expressing himself, the continent alone is capable of defending itself without Washington’s assistance. The Europeans’ dependence on America is a matter of convenience, not necessity.

A more cooperative Russia could advance U.S. interests from the Middle East through Asia. Over the long-term Moscow’s most important role could be to help constrain a growing China. Washington’s hostility has helped push the Russian Federation and the People’s Republic of China together. Yet Moscow is the junior partner, and shares some of the West’s concerns with Beijing’s behavior, especially over intellectual property theft (of military technology) and territorial expansion (into lightly populated Siberia). An informal coalition of America, Europe, and Russia would help moderate Chinese ambitions.

But to get there Washington and Brussels need to reach a settlement with Moscow regarding Ukraine. An offer to end NATO expansion, certainly the entry of Georgia and Ukraine, might induce Russia to end its support for separatists in the Donbass. The latter’s primary value to Moscow is to destabilize Ukraine and render it unsuitable for alliance membership. These days the battleground is as much an economic burden as a benefit for Russia.

Annexed in 2014, Crimea, with the Russian naval base of Sebastopol, poses a different challenge. Although Moscow’s action was lawless, Crimea long was part of Russia. Crimea became part of the Russian Empire after being seized from Turkey more than two centuries ago and remained Russian within the Soviet Union until 1954. In the aftermath of Joseph Stalin’s death, Communist Party General Secretary Nikita Khrushchev transferred the territory to Ukraine in an effort to reassert Moscow’s authority (Ukraine hosted a long-lived insurgency after the German Army was expelled) and bolster his political ambitions (he needed the support of Ukraine’s Communist Party boss). Ethnic Russians still constituted a majority in 2014 and most probably wanted to return to Moscow’s control, though the referendum held at the time was neither free nor fair.

For Russia, the annexation was popular politically and remains important militarily. The Washington Post’s Christian Caryl declared that “the West must continue to insist” that Crimea is Ukrainian “until Russia relents.” However, that won’t happen. The territory will not be returned, whether by Putin or a successor, absent Russia’s defeat in war. Even Putin’s critics recognize that the transfer is permanent. Western officials might feel virtuous freezing the political conflict and maintaining sanctions. But doing so achieves nothing and only works to the advantage of America’s adversaries.

The West needs to reach a modus vivendi with Russia. The allies could accept but not recognize the annexation. Most sanctions could be lifted, with remaining economic penalties targeted on Crimea. Better, however, would be to find a compromise that might offer a more permanent solution. Washington and Moscow should agree to abide by the results of an internationally monitored referendum.

Putin suggested to Trump a vote on the Donbass. However, the Minsk accord already covers eastern Ukraine, though Kiev, as well as Moscow, have yet to fulfill the agreement’s terms. Moreover, Russia has little connection with that territory—and has not annexed it—which therefore remains an issue for Ukrainians to resolve. As noted earlier, for its cooperation the Putin government could be promised that NATO will not expand further east, which would address Moscow’s security concerns, especially after Washington’s deceitful promises about NATO expansion after the Soviet Union’s collapse.

A referendum could provide an answer for Crimea, however. Of course, Ukraine would object because it failed to give its consent for the territory’s separation. If that act was illegal, so would be a subsequent vote. But in practice that is irrelevant. Today Kiev has no chance of reclaiming Crimea. Perhaps Ukrainian politicians benefit from demanding the unattainable. However, if they really desire the territory’s return, they need Moscow’s cooperation.

Moreover, despite their heartfelt appeals to international law, the allies never allow juridical niceties to interfere with their preferred policies. For instance, in rejecting Russia’s annexation, former intelligence officer Malcolm Nance declared that America has spent seventy-five years “keeping international law and the sanctity of international borders.” That is arrant nonsense. For instance, the allies launched an aggressive war against Serbia and detached Kosovo, setting a precedent for Russia in South Ossetia and Abkhazia. (Without the slightest hint of irony Western officials announced that they could do as they pleased, but that would not set a precedent for anyone else.) The United States also invaded, and effectively wrecked, Iraq, contrary not only to international law but the wishes of most European governments. As the Melian Dialogue observed, “the strong do what they can,” and that applies no less to America and Europe than other, supposedly less virtuous nations.

There is a more fundamental point, however. Even if Ukraine legally retains title to Crimea, to transfer the territory back to Kiev’s authority absent its people’s consent would be no less offensive in principle than Russia’s annexation. Caryl declared that “Crimea belongs to Ukraine.” No, it belongs to the Crimeans. The principles of secession are ever controversial internationally, but Crimea’s residents should possess a veto over their return. They should not be traded back and forth as if they constituted a bushel of wheat.

Even if not properly made Russians, today they are Russians. And they should be consulted as to their wishes before their fate is decided. The allies have been no less deficient in this regard than other nations. The predominantly ethnic Serbs north of the Ibar River in Kosovo were not consulted on their wishes as Washington and Brussels created a new, separate state. Going back in time, France no less than Germany made no effort to determine what the residents of Alsace and Lorraine desired.

So Washington should propose a referendum in Crimea under UN auspices. The vote would have to be legitimate, unlike the 2014 poll. Although a majority of residents then likely wanted to separate, the opposition was stifled and the election demonstrated nothing. In this case, allied monitors would be present for both campaign and vote. Ukrainian, as well as Russian officials and interests, would be free to make their case. And the majority would determine Crimea’s future. Once settled, Western relations with Russia could return to normal—with retaliation promised if Moscow further meddled in allies’ internal affairs.

A bizarre hysteria has seized Washington regarding relations with Russia. Yet Vladimir Putin is no Joseph Stalin. Russia is but a pale shadow of the Soviet Union, vastly outranged by America and Europe. Washington is wallowing in sanctimony even though it routinely interferes in other nations’ elections, including in Russia. Ukraine’s fate is of humanitarian, not security, interest to Washington and Brussels. Furthermore, Moscow is much more useful as an acquaintance if not friend working against China than a determined adversary allied with China.

An effort to restore working relations between Moscow and Washington deserves bipartisan support. Ultimately, President Trump’s critics must decide whether they are more interested in advancing their ambitions or America’s interests. The latter warrants making a renewed effort to find a solution to the Ukraine conundrum.