The Seven Reveals: Lessons from the Trump-Kim Hanoi Summit 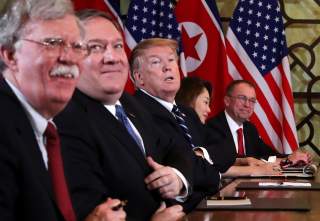 Forecasting North Korea continues to be a treacherous business. In previous weeks I had admonished “to succeed with North Korea, prepare for failure.” However, I also thought both leaders were too deeply invested not to take a modest step forward at a second summit. The administration hinted at progress on all four planks of the brief Singapore summit statement: creating a new relationship (establishing liaison offices), building a peace regime (starting with a peace declaration), working toward denuclearization (capturing fissile material production) and returning more soldiers’ remains from the Korean War (resuming on-the-ground surveys).

Instead of either a modest step forward or an historic grand bargain, however, President Donald Trump and Chairman Kim Jong-un left Hanoi without a joint statement and a yawning gap in their desired end states. Although the summit failed in the immediate sense, it was revelatory in several important ways.

First, by taking negotiations to the highest level and forcing both leaders to make a stark choice, the Hanoi summit revealed the bottom lines of each side. Kim wanted to break the back on economic sanctions while not relinquishing a single nuclear weapon or missile. And when Kim insisted on that price for the severely limited step of closing part of the Yongbyon nuclear facility, Trump upped the ante in search of a grand bargain: complete denuclearization for full sanctions relief. In short, Trump stuck to his original game plan of a commitment to complete denuclearization, with as much if not all of that up front as part of a big deal.

Second, the summit underscored the dangers of over-personalizing international relations. In the end, notwithstanding efforts to create a Trump-Kim bromance, with talk of friendship and even love, both leaders remained glued to their maximalist national interests and did not succumb to the other side’s charm offensive. Trump was willing to go to a summit before a minimally accepted deal was reached at lower levels of negotiation, and Kim apparently thought he need not bother with serious negotiations with anyone by the American leader.

A third, related reveal is that of mutual misjudgment by Kim and Trump. Dialogue between adversaries can break the ice and create understanding, and yet the Hanoi summit showed that a little knowledge could be a dangerous thing. Both sides misread the other, with Kim thinking he could snooker Trump into dropping all sanctions in exchange for limited concessions, and Trump was hoping that he could coax the North Korean leader into thinking the unthinkable: ushering in a modern economy by relinquishing his weapons of mass destruction. Perhaps the misjudgment was perpetuated by the fact that neither leader was particularly interested in hearing from or listening to subordinates that he may be wrong.

Fourth, we learned that sanctions and nuclear weapons exact pain. For all the blather that Kim wanted a declaration of peace, what he appears to want the most is what he was unable to secure: an end to the panoply of international economic penalties preventing him from developing North Korea. And for all the willingness to talk up a peace or a freeze on weapons with Kim, what Trump wants most is the elimination of North Korea’s unlawful nuclear weapons. Sanctions may not work sufficiently, but they bother Kim immensely. Nuclear weapons may not be useful for firing, but they can prevent outside attack, bring a U.S. president into direct talks and will not be abandoned easily.

Fifth, there is a reason most U.S. presidents guarantee successful summits by pre-negotiating the key not secondary elements of the desired outcome. Trump’s Singapore summit offered a shared if vague vision of what might be possible. But a second summit needed concrete steps that would constitute progress (and not necessarily a finished roadmap) agreed to at lower levels in advance. Special Representative Steve Biegun secured all the steps except the most difficult one: one or two meaningful steps beyond closing Yongbyon. The president tested North Korea’s ultimate leader who appears to have reverted to the old Kim family playbook. But it would have been better to postpone the summit for a modest deal that could establish a process and represent a reasonable step forward.

A sixth reveal is how many theories about President Trump were smashed by walking away from a bad deal. So many fears were aired in the runup to the summit: the president would be tricked into a catastrophic bargain with a tyrant, he would trade allies and strategic influence for self-aggrandizement, and he would relieve sanctions while legitimizing a permanent nuclear-weapon state. Fortunately, the haters will have to find other aspects of the administration to criticize, because the president did the right the thing by testing the North Korean leader’s intentions rather than being trapped by the cunning Kim. The only obvious glitch was when Trump said he believed the North Korean dictator when he said he knew nothing about the tragic death of the American student Otto Warmbier.

Finally, the system worked. For all the doubts we harbor these days about the resilience of our democracy, and our system of checks and balances, the failure of the Hanoi summit revealed some of the strength of our democracy. The president can absorb a tactical failure without having to swallow a strategic defeat. Indeed, if for some reason Trump had signed onto a one-sided deal, it never would have been implemented, because of multiple gatekeepers, in the executive and legislative branches of government, the American people, and in international allies and partners.

Many questions remain, including what comes next. Diplomacy suffered a serious setback, but the door is still open. Because Kim said the freeze on nuclear and missile tests would continue, and because Trump is continuing to keep military pressure greatly reduced from the 2017 period, there is some time for Kim to rethink his position. Perhaps he will authorize his negotiators to accept far less of a reward than major sanctions relief in exchange for the largely reversible and secondary step of closing Yongbyon. That, combined with a long-term commitment to complete denuclearization, would revive and invigorate a process. South Korea’s president Moon Jae-in is unlikely to retrench from inter-Korean rapprochement, but he is one of the losers of the Hanoi summit because he cannot move forward with peace-building without meaningful progress toward denuclearization. The United States can redouble its diplomacy with President Moon by trying to persuade North Korea to take a smaller step forward: closing down all of Yongbyon for restarting some of the inter-Korean projects such as Mt. Kumgang, the Kaesong Industrial Complex, or the joint railway connection.

But exposing fundamental disagreement at the apex of the governments of Pyongyang and Washington is not likely to lead to conflict. We have been locked in a cold war with North Korea since 1953, and we appear to be fixed to such a relationship for some time longer. For the time being, however, the Cold War-era tension is at a low level, and the pathway forward surprisingly obvious, if only Kim understands what it really takes to make a deal.

Dr. Patrick M. Cronin is the Asia-Pacific Security Chair and Senior Fellow at the Hudson Institute in Washington, D.C.