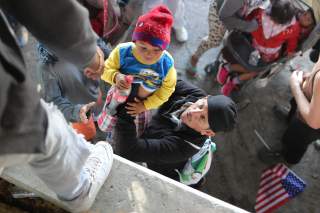 A leaked Department of Homeland Security (DHS) draft memo has revealed that the Trump administration deliberately took infants and children from their parents in an effort to deter asylum seekers from approaching the U.S. border. Buried on page five, the memo highlights who stood to gain from the policy. Section 12 proposes to “direct ICE to explore additional detention capacity by entering into contracts with detention vendors along the border.” By detention “vendors,” the memo is referring to private prison companies, like CoreCivic and GeoGroup, who are among the fastest-growing recipients of DHS funding—thereby joining an array of businesses, from Northrop Grumman to Amazon, that now take in nearly a third of the DHS budget.

Though U.S. taxpayers fund these contracts, they cannot currently hold contractors to the same constitutional and human-rights commitments to which they hold civil servants. Consequently, investors and employees have rightly stepped forward to create financial and reputational pressure on contractors to respect basic human rights—however, they need regulatory support that only Congress can provide. Therefore, it is time for the U.S. Congress to step up and amend existing legislation that creates accountability of the government’s business partners, making contractors adhere to the constitution and to protective human-rights laws, just like federal employees must do.

The impunity of government contractors came into sharp relief with the mass detention of children in the spring of 2018. At the behest of DHS, nearly two thousand children were separated from their families on the southern U.S. border between April 19 and May 31, before federal courts disallowed family separations. Children were detained in facilities ripe with allegations of tortious and criminal conduct. The draft memo leaked in January shows that DHS knew it would need private contractors to facilitate separate detentions of these children and their parents. GEO and CoreCivic took the early lead on these contracts, later joined, by firms with no track record with detention or child welfare at all—including weapons-maker General Dynamics.

Clearly, companies implementing the child-separation policy were not limited to private prison firms. For instance, GEO and CoreCivic took out loans from Wells Fargo and Suntrust to fund new construction. Microsoft and Palantir provided IT services to DHS agencies to support the policy. Amazon’s cloud storage developed and held a database of biometric and facial recognition data gathered by ICE to detain migrants. Northrop Grumman provided surveillance technology that violated privacy while also being used to racially target people near the border.

Previously, an Obama-era executive order mandated that companies follow labor law and meet core human-rights criteria to be eligible to bid for government contracts; some of these criteria included safeguards against unethical hiring and firing practices and human-trafficking risks. However, President Donald Trump reversed this order, opening the door to law- and rights-violating companies to apply for contracts—even ones that interface with children. For example, in the new regulatory void, weapons-maker General Dynamics—who has faced more than $280 million in penalties for twenty-three misconduct cases since 1995 and has no core competency in childcare—won a $36 million contract to care for migrant children in November 2018.

While regulators have struggled to protect Americans and asylum seekers from the human-rights abuses of government contractors, an array of financial risks are creating pressure on these companies. In response to border separations, divestment movements against the private prison companies detaining asylum seekers and their children have pummeled the stock value of those companies. GEO’s share price is down 30 percent from its high shortly after Trump took office; Core Civic’s is down 57 percent.

Other contractors that have taken the lead on facilitating child separation by providing financing or surveillance systems have also faced investor revolts. In December 2018, the Interfaith Center on Corporate Responsibility filed shareholder resolutions with Amazon, weapons-maker Northrop Grumman, Wells Fargo, and Suntrust, alongside new resolutions against GEO and CoreCivic.

Nevertheless, despite these limited financial hits, business is still good from the contracting side: ICE has pulled funds from FEMA, Customs and Border Protection, and the nuclear detection office, among other critical national security agencies, in order to finance these outsourced child detentions. GEO alone has secured more than $2.5 billion in prime contracts from DHS in FY 2018 and 2019. General Dynamics went from $140k in business with the Department of Health and Human Services in the last two years of the Obama administration to $5 billion in current contracts in the first two years under Trump.

But reputational hazards are a barrier for responsible companies, as employees and managers are beginning to voice outcry against their employer’s complicity. In summer 2018, throughout Silicon Valley, employees protested against their employers’ DHS contracts. More than one hundred Microsoft employees called on the CEO to cancel an ICE contract and commit to vet contracts for human rights risks before signing future deals. Similarly, Palantir employees walked off the job to declare their skills would not be used to build a “Muslim database.” Finally, Amazon workers publicly protested the facial recognition technology that triggered the previously mentioned shareholder resolution. In response to employee uproar, Microsoft CEO issued a formal statement denying any knowledge their product was used in separating families and condemning the policy as a whole. Little information is available as to Amazon and Palantir’s responses to employee protests.

CEOs are now being directly asked to consider human rights when they make financial decisions to the detriment of migrant children—and they are now doing so. For example, the “tent city” that housed seven thousand migrant children in Texas between June 2018 and January 2019 closed, not because they were ordered to, but because the organization operating it, nonprofit BCFS, refused to accept a long-term contract to run it; this decision essentially forced DHS to rehouse the children elsewhere.

Unfortunately, the tent city’s closure did not result in the release of vulnerable children. Instead, weapons-makers and defense contractors, like frequent rulebreaker weapons maker General Dynamics, stepped forward contracts to house them. So did Southwest Key—a nonprofit provider of child detention services who faced severe sanctions for child abuse ranging from sexual violence to drugging children as a means of behavioral control and who saw its federal funding dry up towards the end of the Obama administration; in 2018, however, it collected $626 million in federal grants, dwarfing the funds it had received in the preceding decades.

What these developments point to is a catastrophic new normal: Companies that care about their values and reputations are not bidding for contracts, and standards that would require companies to be responsible and competent have been rolled back.

What Congress Can Do

Donald Trump reversed Barack Obama’s executive order requiring contractors to obey the law. Yet, Congress could convert that order’s language into law and give it lasting power—and they should do so now so as to protect the children being harmed.

Congress should also require contractors and their employees to take the civil service oath, committing them to protect and uphold the constitution. This is not a new or novel idea: It was hotly debated after Edward Snowden leaked NSA documents, because, as a contractor, he had broken laws in disclosing classified information but could not argue that he did so to uphold vows to higher constitutional purposes. A civil service oath for contractors could give them the authority, and perhaps the obligation, to adhere to constitutional principles.

The American public, investors, and CEOs have seized on the horror of the family separation policy to create more mechanisms for corporate accountability, specifically for government contracting. They can’t stop bad actors from enabling rights-averse policies, though. Now Congress needs to step up.

Mallory Miller is a researcher at NomoGaia and a student at the University of Denver Sturm School of Law. Kendyl Salcito is the executive director of NomoGaia and a security fellow with Truman National Security Project. Views expressed are their own.