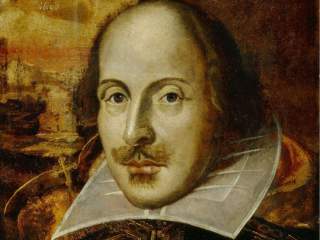 The past decade has witnessed an explosion of articles, panels and podcasts on the relationship between popular cultural artifacts and national security. From Battlestar Galactica to Harry Potter, and from Star Wars to Game of Thrones, fiction has generated a vocabulary for teaching, engagement and even a form of strategic analysis.

Partisan disputes may explain the appeal of this kind of work. With analysts bitterly divided over foundational questions of national security and foreign policy, fictional works provide scarce common ground for discussion and debate. Fighting over imaginary landscapes frees analysts, at least in part, from tricky questions of real world assessment.

Williams Shakespeare died on April 23, 1616. As we pass the four hundredth anniversary of the passing of the Bard, it is perhaps worthy of our time to grant him the same courtesy that we give to George R. R. Martin. The works of Shakespeare have served as a touchstone for much strategic and military thinking over the years. In all likelihood, they will continue to do so into the future.

The Bard on War

War serves as the setting for many of the bard’s finest plays. Two of the four great dramas involve large-scale combat, as do many of the best historical plays. Shakespeare lived in the Renaissance world of warfare, where early modern forms of military organization competed with medieval affiliations and concepts.

Shakespeare primarily, although not exclusively, attempts to depict the warfare of the late medieval and ancient periods. His depiction of the medieval includes a fixation on personalities, and on the ties that bind feudal lords to their soldiers (as well as to their enemies). His depiction of ancient warfare depends less on the personal, which in some ways proves more familiar to moderns than the medieval.

Fortunately, Shakespeare’s main contribution lies more in the camp than on the battlefield. On the one hand, this has enabled adapters to place him within a modern military context (as with Richard III and Coriolanus). On the other, it has kept the eye of the audience steadily on the interpersonal; the motivations of soldiers for glory, loot and honor; and the ways in which soldiers relate to one another. Indeed, Henry’s passage through his camp on the day before the Battle of Agincourt has become a foundational text for understanding the relationships between commanders and their men.

The Bard on the Nation

Shakespeare wrote at the dawn of modern nationalism. In many ways, he served as an effective propagandist for a British nation united under a single crown, and needing a single national literature. We can understand how the proto-nationalism evident in Shakespeare’s Roman plays appealed to him (and to his audience) in this context, but he does not shy away from making direct, concrete appeals to British communal identity. Macbeth surely played a role in this effort, legitimating and historicizing the unification of Scotland and England. Similarly, the history plays help to provide a common national story for the disparate parts of the kingdom.

Shakespeare also took care to delineate the boundary between French and English nationalism. Henry V remains the clearest evocation of a uniquely English fighting spirit, even as Henry makes the case that he so loves France that he could not part with a village of it. But an undercurrent of British nationalism also runs through King Lear, despite the most sympathetic daughter finding herself by the side of the king of France. None of this leaves us with very useful insights into the future of Europe, or even of Brexit, but Shakespeare’s work does offer a window into how popular literature can help manufacture a national identity.

The Bard in Strategic Discourse

We certainly find a great deal of interpersonal strategy in Shakespeare. Iago outwitting Othello comes immediately to mind, but also Hamlet steadily undercutting Claudius, Prince Hal dispensing of Falstaff and dozens of other cases. We find discussion of national strategic issues less often. In Hamlet, Fortinbras steadily accumulates power and reach as the rulers of Elsinore fiddle, but the prince of Norway only appears in the final scene of the play. In Lear (as opposed to Kurosawa’s interpretation, Ran) Shakespeare concentrates on the inability of the old king to properly assess the value of his daughters, rather than the political error of dividing the kingdom into three parts. Even Coriolanus, perhaps the most militaristic of Shakespeare’s works, concentrates mostly on the question of personal betrayal, rather than politics per se.

To be sure, some of the plays deal with political themes. Mark Antony makes a political (if emotional) appeal to defeat the assassins of Caesar. In Measure for Measure, the Duke Vincentio adopts a Machiavellian tactic in order to learn more about his city, and his lieutenants. And the history plays include a variety of stratagems intended to throw enemies off guard.

But just as Game of Thrones provides the grist for modern strategic conversation, common familiarity with Shakespeare has made him a touchstone for writers on military strategy through the centuries. Julian Corbett cited Shakespeare in his history of the Tudor navy. B. H. Liddell Hart credits Shakespeare (especially in Hamlet) with evocatively illustrating the value of deception in warfare. Churchill littered his speeches and books with references to Shakespeare, especially the historical plays. The Bard appears less frequently in the American strategic canon (to the extent that this canon diverges from its British cousin), but numerous American presidents have found great value in his work.

Shakespeare doesn’t offer much of use in terms of thinking about combined arms operations or FONOPs in the South China Sea, except in that the human conflicts and dilemmas that afflict his characters also afflict us. The most useful contribution that any art can give to strategic discourse is by providing a common vocabulary that enables discussion. A reference to Macbeth, Achilles or Harry Potter is productive only insofar as it awakens a common set of understandings about the ways in which persons and institutions interact.

Shakespeare’s celebration of the human, along with his enduring popularity, mean that he will continue to set this stage for a very long time. The endurance of the Bard has not, in any meaningful sense, cheapened or damaged the strategic discourse of the English speaking world. Instead, it has provided common source material for thinkers and writers across generations. The appeal of George R. R. Martin and the Star Wars saga may well prove less enduring, but if they serve effectively the same purpose (and are used in moderation), it is difficult to see any very serious problem.

Robert Farley, a frequent contributor to the National Interest, is author ofThe Battleship Book. He serves as a senior lecturer at the Patterson School of Diplomacy and International Commerce at the University of Kentucky. His work includes military doctrine, national security and maritime affairs. He blogs at Lawyers, Guns and Money, Information Dissemination and the Diplomat.