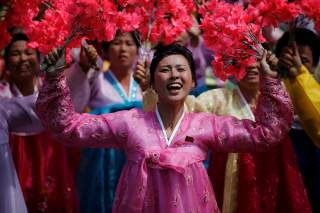 As the United States, North Korea and South Korea are negotiating denuclearization and potential economic investment, one group of North Koreans stands to benefit most: the country’s women. Underground markets—and the outside information that passes through them—offer a sliver of hope for the people of North Korea, and a way out for women, despite the political and social systems that remain rigged against them.

In 1946, Kim Il-sung outlawed polygamy, concubinage, the buying and selling of women, prostitution and arranged marriages. The two laws the elder Kim created also gave women equal rights to divorce and inherit property. However, reality proved to be quite different. Even now, it is not unheard of for women in the DPRK to be sold as brides to men in China, and to suffer abuse at the hands of the men in their community. Women are raped or beaten by strangers or their husbands with no practical recourse, and sexual violence is so entrenched in North Korean society that researchers from the Korea Future Initiative reported that female defectors they interviewed “thought it was just normal male behavior.”

Change does not occur overnight, especially in a misogynistic society where gender norms and behaviors have been reinforced by decades of government policy and a centuries-old patriarchy. It was not until the emergence of a women-driven underground market economy surfaced in the mid-1980s that divorce and later marriages even became an option. But underground markets are changing women's perceptions of their own rights and citizens’ perceptions of the role of government.

The unofficial market economy first surfaced in the mid-1980s and grew throughout the 1990s, fueled by the collapse of the Public Distribution System and government guaranteed income created by the great famine. According to a recent report by Daily NK, not counting the unofficial markets, 387 markets have become officially-sanctioned with over 600,000 stalls. Through these markets, women buy and sell goods and services ranging from the simple and highly popular double eyelid surgery, to foreign films, and fruits and vegetables. Women now make the majority of the household income, 60 to 70 percent according to one defector’s estimate, and this income divide is only deepening thanks to the required low-paying State jobs at factories and agencies that men must continue to attend.

According to a 2015 survey conducted by Seoul National University, three-fourths of respondents reported that at least 70 percent of North Koreans participate in market activities or some other personal small business. The increased economic power of women is allowing them to be the drivers of their own destiny. One defector I surveyed said that in households where women make the money, families are now more likely to do as their wives and mothers say. Divorce, once unheard of, is increasingly becoming an option, while some women choose not to get married at all.

Since his ascension to power, Kim Jong-un has placed an emphasis on quality of life improvements ranging from ski resorts to shiny new apartments for the loyal residents of Pyongyang. Many North Koreans are no longer oblivious to the fact that most of the world has it better than they do. The knowledge accumulated over the last thirty years in the markets, through private home-trading networks, and a variety of other methods have kept the entrepreneurial spirit alive and well in North Koreans. The United States can work with governments, international women’s NGOs and international institutions to provide affordable and accessible classes to female students in small business management and English. A privately funded small business loan program would increase upward mobility and fuel the growing middle class. Pyongyang University of Science and Technology—the only privately-run university in North Korea—is one example of an independent organization that the United States (and others) can work with to accomplish these aims.

The breakdown of the Public Distribution System and the rise of North Korean markets has created a psychological space between the people and the government. The relationship of dependence between North Koreans and the Kim regime no longer exists. Money is power, and as the number of female entrepreneurs continues to increase so does their ability to affect change. If upcoming negotiations between Washington and Pyongyang lead to the creation of economic opportunities and push a further opening of the economy, then the women of North Korea may be among the most important beneficiaries.

Kelli Kennedy is a Master’s candidate at the LBJ School of Public Affairs at The University of Texas studying Politics and Security on the Korean Peninsula and in East Asia. Prior to pursuing her masters she lived in South Korea, where she advised business executives on communication strategies. She is fluent in Korean.