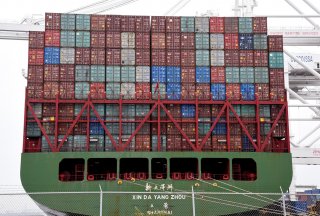 Trade issues with China have these days taken a back seat to more pressing geopolitical considerations. That is probably as it should be, but still, U.S.-China trade has taken a turn that deserves attention. It has become apparent that American business and industry have shifted decisively away from Chinese sourcing, in part because of China’s nationalist positioning during the pandemic but also because of more lasting and fundamental cost considerations. The data also show that China is buying more from U.S. producers than previously, no doubt in compliance with the trade deal hammered out in 2019 with the Trump White House and announced just before the onset of the pandemic. While it is unfashionable in the extreme these days to ascribe any success to the Trump administration, success on this front is what the data describe.

When Former President Donald Trump first imposed tariffs on Chinese imports, he seemed to be playing with fire. Commentators warned of the risks of a “trade war” and threats to the global trading system on which this country and most others depended for much of their prosperity. There was, to be sure, evidence that China needed trade with the United States more than the United States needed trade with China and so might bow to Washington’s demands. The administration even had support from the father of free trade, Adam Smith, who in his classic, The Wealth of Nations, found room in his thinking to support tariffs if they were used to pressure others to abandon restrictive trade practices, whether tariffs or other less obvious ways, such as those pursued by China. But even in light of such considerations, the behavior of the Trump White House seemed reckless.

To some extent then, it was a surprise when the two sides in January 2020 announced that they had reached an agreement. Under it, Beijing basically made four promises: the first one was to stop its practice of supporting exports by manipulating the foreign exchange value of the yuan. The second one was to cease the Chinese tendency to infringe on U.S. patents and copyrights. The third one was to ease Beijing’s long-standing insistence that American firms doing business in China have a Chinese partner to which they must transfer all their technological and business secrets. And fourth was China’s promise to buy some $200 billion more of U.S. goods over the following two years. Even after the announcement, many remained skeptical, because Beijing had broken so many promises to several U.S. presidents in the past and perhaps also because many had a congenital inability to give the Trump team credit for anything.

Though some of this skepticism was perhaps reasonable, Beijing so far seems to have taken steps to live up to its end of the deal. The yuan has fluctuated, as is the case with all foreign exchange, but shows no sign of outright manipulation. Beijing has relaxed its insistence that every American business in China have a Chinese partner and instituted civil and criminal procedures for patent and copyright infringements. On the additional purchases, the statistics speak loudly. According to the Department of Commerce, U.S. goods exports to China have risen at almost a 14.5 percent annual rate since 2019, far faster than the 0.6 percent yearly growth in all U.S. exports during this time and also faster than the 1.25 percent annual growth of U.S. exports to China during the three years prior to the deal. This recent acceleration in exports to China is still more impressive since changes in U.S. sourcing have otherwise reduced the export of American components to China for assembly.

The trade deal is, however, only part of the shifting story on Sino-American trade. American buyers are clearly cutting back on their Chinese sourcing. This pattern is apparent in recent Commerce Department data showing how China is losing out on what is otherwise a surge in U.S. imports. The robust response of the American economy to the lifting of pandemic-related restrictions has sucked imports into the country from everywhere, as is usually the case when this country grows rapidly. U.S. imports of goods from all sources rose 33.7 percent in just the nine months between last June and this past March, the most recent month for which complete data are available, according to the Commerce Department. But goods imports from China rose only 6.9 percent during this time. Part of this reluctance to buy Chinese stems from security concerns—not so much national security as supply-line security. During the pandemic, China held back on several vital products. Though Beijing’s action in the emergency is understandable, equally understandable is how it prompted American buyers to diversify their sources.

The turn away from Chinese imports has a longer-term component as well. For some time, labor costs in China have been rising faster than elsewhere. According to China’s Ministry of Human Resources and Social Security, the average wage in China increased between 2012 and 2019 at a striking 10 percent a year. This is only natural in an economy developing as fast as China’s, but it is a startling figure nonetheless. The wage growth has erased any cost advantage China might have enjoyed over less developed economies, such as Vietnam, Indonesia, and several in Latin America. During the pandemic, this rapid wage growth stalled, but now in recovery, there is every reason to expect it to resume. It had already convinced American buyers to look elsewhere for the kinds of bargains Chinese production once offered, especially in lower-tech products, such as toys, textiles, and shoes, once the almost exclusive purview of Chinese sources. This effect is evident in the data from before the pandemic or even before the 2019 “trade war.” Between 2015 and 2018, all U.S. goods imports increased at an expansive 15.7 percent annual rate, but those from China grew only 3.1 percent a year.

With American purchases in China slowing and Chinese purchases of American goods accelerating, the balance of trade between the two countries has become less lopsided. The Commerce Department puts the worst bilateral trade deficit in 2018 when China sold the United States $419 billion more goods than U.S. producers sold in China. As of the first three months of 2021, that difference was running at a $284 billion annual rate, which is still a huge deficit but a correction (if that is the right word) of about a third. Whether this trend continues depends on policies coming out of Beijing and Washington as well as the inevitable ebb and flow of economic cycles—in the United States and China and just about every country in the world that competes with either this country or China. But for the time being, a major source of tension has abated.

Milton Ezrati is a contributing editor at the National Interest, an affiliate of the Center for the Study of Human Capital at the University at Buffalo, and chief economist for Vested, the New York-based communications firm. His latest book is Thirty Tomorrows: The Next Three Decades of Globalization, Demographics, and How We Will Live.