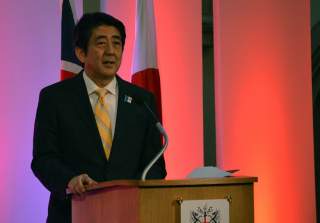 Last week, senior Japanese diplomats met with their North Korean counterparts in Beijing to discuss progress on Pyongyang’s promise to reinvestigate cases of abducted Japanese nationals. After months of pressure, Pyongyang agreed to reopen the case in late May after meeting with Japanese officials in Sweden, signaling a potential breakthrough in Japanese-North Korean ties. North Korea’s acceptance of Tokyo’s request to probe the issue has been a welcome result for Prime Minister Shinzo Abe, who has long championed resolving the abduction cases.

The breakthrough was a significant diplomatic victory for Japan, which has been applying pressure on the North for years to reopen the investigation. Pyongyang claims that the issue was resolved in 2002, when former leader Kim Jong-il and former Japanese Prime Minister Junichiro Koizumi signed the short-lived Pyongyang Declaration in 2002. At that time, the North returned five abducted Japanese citizens and indicated that the rest of the suspected abductees were deceased, missing or never taken in the first place. Tokyo continues to dispute this claim and has shown evidence of the North’s lack of transparency on the issue.

Specifically, the North has claimed to create a Special Commission to investigate all of the suspected and actual cases. In response, Japan has agreed to relieve some of the sanctions it has currently enforced against the North including travel bans, some restrictions on financial transactions and port access in Japan for North Korean vessels. But, the extent of any sanctions relief will depend on Tokyo’s evaluation of the North’s sincerity in reopening the cases.

Yet, while the news of the probe is a diplomatic coup for Abe, its importance should not be overstated. The majority of Japan’s sanctions against the North, focused on its WMD and missile program, will remain in place, regardless of the outcome of the bilateral talks. Moreover, Tokyo continues to step up efforts to improve trilateral-deterrence options with the United States and South Korea. An additional wrinkle is the recent approval by the Abe cabinet of Japan’s reinterpretation to the right of collective self-defense. This is a right that all states maintain through the United Nations charter, but Japan had a self-moratorium since the end of World War II. Japan’s push to change the interpretation was largely justified by the Abe government’s depiction of the “severe” security environment in Northeast Asia, including a volatile North Korea.

Abe’s approach to the North however has unnerved South Korea and, to a lesser extent, the United States. Seoul especially worries that Abe risks undermining trilateral efforts aimed at thwarting the North’s plans to continue developing its missile and WMD technologies. The North’s recent missile test and Tokyo’s condemnation the day before the Beijing meeting added another layer to this complex relationship. Japan’s reaction was predictable and consistent with its history of responses to Pyongyang’s short-range tests. The measured response, along with a similarly mild reaction to previous missile tests this past spring, is an indication that the Abe government is committed to following through with the abduction talks.

However, Abe’s openness to engage with the North does have a limited shelf life. A more acute provocation, such as a fourth nuclear-weapons test or long-range missile tests would surely force Abe to abandon his current two-track approach with Pyongyang. Moreover, there is building pressure on Abe from Washington to take steps to improve strained ties with Seoul. This all means that Japan’s recent diplomatic path with the North needs a speedy resolution, or else it will join other failed attempts.

What are the prospects of a satisfactory resolution to the abduction negotiations? The North presented its work on establishing the Special Commission last week to Japan’s top envoy for the negotiations, Junichi Ihara. Tokyo, though, remains skeptical until there is tangible work done on the host of inconsistencies arising from Pyongyang’s original revelation that came out of former Prime Minister Junichiro Koizumi’s historic visit to the North Korean capital back in 2001. Pyongyang, meanwhile, continues to leverage Japan’s desire for a resolution in order to procure economic-sanctions relief from Tokyo and, simultaneously, chip away at trilateral efforts at containing the Kim regime.

Abe has publicly floated his willingness to travel to North Korea if it will further a resolution to the abduction issue. However, in reality, this is more of a calculated bluff, as Tokyo remains extremely cautious about rewarding Pyongyang without any tangible results. The Abe government will need to maintain this approach in the coming months and work around contingencies and spoilers that would upend the talks before anything is resolved. Moreover, Japan needs to be transparent and communicative with Washington and Seoul about its engagement with Pyongyang and reassure both sides that the talks are narrowly focused and won’t result in broader sanctions relief.

J. Berkshire Miller is a fellow on Japan and Chair of the Japan-Korea Working Group with the Center for Strategic and International Studies Pacific Forum. Follow him on Twitter: @jbmllr.