Shock and Awed: Yes, Russia Can Still Fight a War 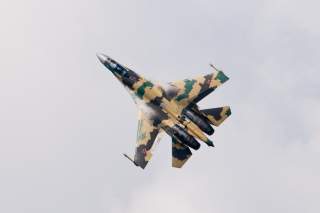 How could this be? Whatever happened to the hapless Russian military, the bumblers that embarrassed themselves in Chechnya and Georgia?

Actually, here's the better question: Why is anyone surprised that Russia knows how to fight a war?

There has been plenty of media attention on Russia's use of advanced weapons in Syria, such as cruise missiles, and laser-and satellite-guided bombs. Some have questioned how many smart bombs Russia has used or is able to use, but the overall tone is one of shock and awe at Russian capabilities.

The weapons themselves are not that impressive. Cruise missiles? The U.S. has been launching them for 25 years, ever since Tomahawks pounded Baghdad in 1991. Laser- and satellite-guided bombs? America and NATO have used them in Iraq, Afghanistan, Libya and Serbia.

If Zimbabwe had launched cruise missiles, this would have been impressive. If Iran was dropping smart bombs, that would have raised an eyebrow. But Russia is a former superpower, with vast experience and skills in designing advanced weapons.

The T-34 tank demoralized the German armies in 1941. Soviet anti-tank and anti-aircraft missiles surprised Israeli forces in 1973 and American aircraft over Vietnam, while Russian tanks today are equipped with advanced active protection systems to defend against anti-armor missiles. Critics wonder whether Russian jets like the Su-30 will blast America's best planes out of the skies.

“What continues to impress me is their ability to move a lot of stuff real far, real fast,” Lt. Gen. Ben Hodges, the commander of United States Army forces in Europe, told the New York Times.

Why American commanders are impressed is baffling. Britain successfully dispatched an entire amphibious strike force 8,000 miles to the Falklands in 1982, despite operating on the thinnest of logistical shoestrings. Russia is only sending a small amount of troops, along with thirty planes or so, just 2,500 miles to friendly bases in Syria. For Ecuador and New Zealand, this would be an achievement. For a large and powerful military power like Russia, it is not a remarkable feat, certainly not compared to the hundreds of thousands of troops that the U.S. sent to Vietnam, Iraq and Afghanistan.

This is neither to praise nor denigrate Russia's military capabilities, nor to compare them to American and Western technology. This is simply to point out that Russia is not some tinpot third-world basket case with a make-believe army, but rather the nation with the third-highest military spending on the planet. After lavishing billions on its armed forces, shouldn't the expectations for Russian military prowess be a little better than "they didn't screw up"?

If Russian military prowess is being extolled because Syria has not turned into a fiasco like Chechnya and Georgia, then consider the state of the U.S. military after Vietnam. Or the invasion of Grenada in 1982, where U.S. troops struggled to overcome the mighty Cuban construction engineers. Imagine how it would have felt if China expressed surprise and admiration for the American military because it was not defeated by Saddam Hussein in 1991.

Perhaps there is also a touch of envy at work. As NATO struggles to handle a newly aggressive Russia in Eastern Europe, one wonders whether nations like Britain or Germany could even send a couple thousand troops and a few dozen warplanes without American help.

Russia is a major military power. It should be treated as such.