Short of War: Is the World Ready to Defend Taiwan? 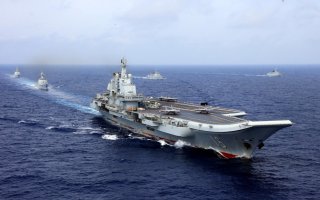 For the first time, the Chinese Communist Party’s (CCP) constitution stipulates its intention to oppose and deter separatists seeking Taiwanese independence. The revised charter takes a more aggressive stance than the language adopted at the 19th National Congress in 2017, which set out to strengthen the unity among all groups within China “to facilitate national unification.” However, the language from the 20th National Congress is arguably nothing new. In March 2005, the 10th National Congress enacted the Anti-Secession Law of which Article 8 states that the People’s Republic of China (PRC) “shall employ non-peaceful means and other necessary measures…” in the event that

Revisions to the CCP’s constitution have happened at every party congress since 1982. Amendments to the charter gesture toward the policy direction the PRC will strive to implement for the next five years but the addition of the anti-independence amendment raises questions about whether the PRC believes one of the three conditions in the Anti-Secession Law is likely to be satisfied in the near future.

Notwithstanding the PRC’s territorial claim, Taiwan and Penghu, as well as the offshore islands of Kinmen and Matsu, exist as a self-governing entity under the name of the Republic of China (ROC). There has been no attempt by the PRC to invade these territories since 1971. Yet, over the next five years, the PRC will exploit the uncertainty of Taiwan’s international status and ramp up its gray zone activities, or measures short of war, in combination with the rhetoric of international law, to deter foreign interference and exert pressure on Taiwan to accept the PRC’s proposal for peaceful reunification.

China Vies for a New Normal

Public attitudes in Taiwan often downplay the prospect of a cross-strait war as an unknowable future question or simply impossible due to global economic interdependence. In other words, the public’s understanding of how war will break out is that the PRC will eventually launch a full-scale invasion, but with no consensus as to when this might happen, or that the status quo will prevail. However, such binary thinking ignores that measures short of war are a means for the PRC to achieve its goals when the option of a full-scale invasion is neither militarily nor politically feasible.

Domestically, Chinese leader Xi Jinping has to consider three interconnected factors before launching a full-scale invasion: time, internal coordination between the Politburo Standing Committee (PSC) and Central Military Commission (CMC), and the People’s Liberation Army’s (PLA) fighting capacity. If Xi lacked time, the impulsion to set the record once and for all through a full-scale invasion would be tempting, as measures short of war take time to deliver an outcome. However, the risks associated with defeat are also exponentially higher. Luckily for Xi, the time factor has been alleviated after his appointment to a third term as the CCP’s general secretary.

A second consideration is that while the PSC decides on any Taiwan action, the CMC is ultimately responsible for planning and executing the assault. For a Taiwan contingency, Xi would need to streamline the chain of command between the PSC-CMC without obstruction. Precisely, Xi’s new generals after the 20th National Congress show that the gap for this prerequisite is closing through the promotion of Gen. Li Shangfu, an expert in electronic, cyber, and space warfare, and Gen. He Weidong, who is responsible for the PRC’s Eastern Theater Command, which includes Taiwan-related operations. However, unlike their American counterparts, few Chinese generals have combat experience. This is a consideration for Xi when he has to decide whether the PLA is fully-prepared to launch an invasion against Taiwan.

Third, the feasibility of executing the assault on Taiwan is also an open question. The most prominent and aggressive operational concepts of large-scale amphibious invasion are complex operations requiring air and maritime superiority. It would require the PLA to mechanize, informatize, and intelligentize its armed forces before Beijing could employ credible military options for a Taiwan scenario. This is expected to materialize no sooner than 2027. Additionally, the possibility of a U.S. intervention during a Taiwan contingency and ongoing border conflicts with Vietnam and India poses significant constraints on PLA resources and manpower.

Acknowledging that Xi is no longer on borrowed time, there is no reason for him to incur domestic and international backlash that may hurt his position of power. Moreover, he does not have to gamble on the prematurity of the other two variables, in which a military failure could have unintended consequences such as significantly weakening China or leading Taiwan to formally declare independence. Thus, the practical solution for Xi is to continue restructuring the PCS-CMS chain of command and modernizing the PLA to remake the status quo in the PRC’s favor. At present, measures short of war are the best military option for Xi’s Taiwan strategy.

Since Taiwan has never unequivocally declared independence and is currently represented by the government of the ROC, the uncertainty of Taiwanese statehood has implications for the legality of the PRC’s coercive measures. While the PLA ceased all military operations targeting the ROC territories in 1979 (when the PRC normalized relations with the United States), there is no official armistice between the two entities. The PRC could argue that, without a formal peaceful settlement, the non-international armed conflict between the PRC and the ROC has continued from 1947 until today. Also, in the absence of an agreed armistice line, any violation of Taiwanese airspace and water is arguably not a violation of international law. The process of challenging Taiwan’s effective control of its neighboring airspace has already begun. Military aircraft of the People’s Liberation Army Air Force (PLAAF) recently crossed the median line of the Taiwan strait, the de facto boundary between Taiwan and the PRC.

A pyramid of measures could be drawn based on the gravity of the potential violation of international law by the PRC. Possible responses by the international society would depend on the legality and perceived acceptability of each action by the PRC. Below, we have listed various measures short of war that the PLA could employ by order of severity. Ideally, as the PLA moves down the pyramid, it changes the status quo in favor of its civil war narrative.

The ambiguity of Taiwan’s international status and the overlap of Chinese government representation could be exploited by the PRC to undermine the legitimacy of any assistance to Taiwan. The uncertainty of whether Taiwan, as a de facto territorial entity short of a widely recognized state, is protected by international law is intertwined with the debate over Taiwanese statehood. In conjunction with adopting harsher measures, the rhetoric of the PRC would shift from the language of domestic law enforcement to military operations in the context of the unfinished Chinese Civil War. At the top of the pyramid is a full-scale naval blockade that would otherwise be considered an act of war if Taiwan was recognized as a state. Since the PRC enjoys veto power at the United Nations Security Council (UNSC), it is unlikely that the UNSC could adequately react in such a scenario. Thus, most of the international responses discussed in this article focus on countermeasures and interventions from third states.

The Legality of PRC Measures Short of War

Since the PRC views Taiwan and its surrounding waters as its sovereign territory, the PRC could increase pressure by exerting maritime enforcement jurisdiction in Taiwan’s Exclusive Economic Zone (EEZ) under the pretexts of protecting Chinese fisheries or maritime environment in accordance with the United Nations Convention on the Law of the Sea (UNCLOS). The PRC’s recent statement that the Taiwan Strait is not an international waterway signifies an increasing willingness of the PRC to reassert this claim. One implication for Taiwan’s lack of recognized statehood is that Tapei is unable to utilize the International Tribunal for the Law of the Seas (ITLOS) to secure the release of detained crews and vessels. One possible response is to redesignate Taiwanese shipping under foreign registration, following the precedent of Kuwaiti oil tankers flying the U.S. flag from 1987 to 1989. This presupposes the willingness and availability of other states to establish “genuine links”, including the exercise of jurisdiction and control over Taiwanese ships.

Subsequently, the PRC could begin to stop, search, and visit Taiwanese and foreign ships on the high sea to seize contraband. The definition of contraband could be widely interpreted by the PRC as being strategic materials destined for ROC-controlled territories. Foreign ships destined for Taiwan could also be diverted to Chinese ports for search and visit. The legality of such operations rests on the premise that any cross-trait conflict is a “civil war” and that the PRC is entitled to prevent foreign states from arming “the rebels” (be it the ROC or Taiwanese separatists) against “the legitimate government of China.” The International Court of Justice (ICJ) decided in the famous Nicaragua case that U.S. funding of the contras during the Nicaraguan civil war constituted an unlawful intervention in its internal affairs. Arming and training rebel groups could even constitute an unlawful use of force. The PRC would undoubtedly frame any of its measures against Taiwan as countering unlawful foreign intervention in Chinese internal affairs. The PRC could shape regional and international discourse with the use of the nonintervention principle, which has been traditionally well-received by the Third World.