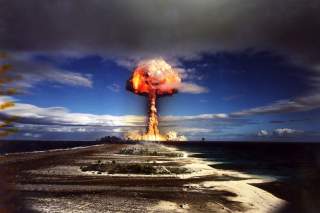 Editor’s Note: Please see previous works by Robert Farley including: Asia’s Greatest Fear: A U.S.-China War, Five Revolutionary Soviet Weapons of War that Never Happened, The Five Most Overrated Weapons of War, America’s Troubled F-35: Five Ways to Replace It, Will the F-35 Dominate the Skies?, Five Best Bombers of All Time, and The Top Five Fighter Aircraft of All Time.

The presumably accidental revelation of the PLA’s DF-41 road-mobile ICBM is only the latest indication that China is modernizing and reorganizing its nuclear arsenal.  Over the past decade, China has worked to modernize its nuclear delivery systems, both on land and at sea.  This work has helped narrow the gap between China and the US-Russia superpower tandem, although Chinese capabilities remain far behind.

This article tracks the most important recent developments in China’s nuclear posture, then discusses some of the political implications of these developments for Asia, the United States, and the rest of the world.

Nukes by Land, Nukes by Sea

The apparent confirmation of the existence of the much-rumored DF-41 ICBM has some very interesting implications for the future of Chinese nuclear weapon policy. In the simplest terms, the development of the new ICBM ensures that China’s nuclear deterrent can reach the entire continental U.S., as well as a variety of other potential foes.  It also gives the Second Artillery MIRV capable ICBMs for the first time, although reports suggest that the PLA is also working on MIRVing its older missiles.

China has long been dependent on the ancient DF-5 for its ICBM needs, recently supplemented by the DF-31A. The DF-41 represents a major modernization, as well as an expansion of China’s overall deterrent capability. Its development suggests that China is moving definitively away from minimal deterrence, and toward a more robust, survivable second-strike capability.  This indicates a significant change in how China views its nuclear arsenal.

The development of an effective submarine deterrent also helps revise the nuclear equation between China and the United States. The commissioning of five boats of the Type 094 class over the past decade has radically increased China’s nuclear capabilities at sea, which less than a decade ago depended on a single, unreliable submarine.

Although Chinese boomers cannot yet effectively hide from American hunters, and the Chinese have yet to achieve the basic requirements of the Soviet “bastion” strategy of the 1970s, the Chinese SSBNs nevertheless significantly increase the reach of China’s nuclear deterrent.  However, they do not yet represent a practical threat to the mainland United States, as the missiles lack of range and the boats lack of quiet makes them sketchy to deploy in tense circumstances.

Reports indicate that China has already moved on the construction of the Type 096 SSBN, which will carry more missiles and presumably operate more quietly.  Given the undersea advantages of the United States, it will still be some time before China’s SSBN fleet poses a major threat to the United States.

One of the biggest questions with respect to China’s changing nuclear posture involves arms control.  For four decades, the key nuclear arms control agreements have been conducted in bilateral terms between Washington and Moscow.  The increasing size and sophistication of the Chinese arsenal may make this approach obsolete.

If China’s increases the size of its nuclear arsenal, and the sophistication of its delivery systems, then arms control agreements that focus only on the United States and Russia will become quaint.  Of course, Moscow and Washington can still make considerable progress reducing warheads and delivery systems before the Chinese arsenal becomes comparable, but the PLA is closing the gap.  It’s also worth noting that because China is not party to the bilateral agreements, it has considerably more freedom to explore the technical frontiers of ballistic and cruise missiles than either the US or Russia.

Chinese nukes matter not just for the United States, but also for India.  Even if the arsenal serves only as a deterrent to the United States, it can loom as a much more serious threat to New Delhi. India is developing an increasingly formidable nuclear force, but it does not yet match China’s in size or sophistication.  When China takes steps to close the gap with the United States (and Russia), it expands the gap with India.  This (as well as the ongoing expansion of the Pakistani nuclear arsenal) has spurred India on the greater efforts, such as the recent commissioning of its first nuclear ballistic missile submarine, and a series of improvements to its ballistic missile arsenal.

Has the US focus on missile defense spurred China to greater efforts with respect to its long-range nuclear strike capabilities?  Perhaps, but it’s just as easy to read China’s activities as a long overdue modernization of its nuclear forces.

We can expect that, as China’s missile capabilities become more formidable, proponents of missile defense in the United States will take heart.  However, if China is serious about supplying the Second Artillery with new ICBMs in significant numbers, it is very difficult to envision a scenario in which a National Missile Defense system could threaten to fully defeat China’s deterrent. Given that national missile defense has become more of a signifier in U.S. domestic politics than a potential strategic capability, however, this probably won’t matter much.

Historically, the People’s Republic has adopted a policy of minimal deterrence, using the threat of intolerable damage to convince both Moscow and the United States that an attack was not in their interest. This has meant maintaining a deterrent nuclear arsenal distinctly, and intentionally, inferior to that of Russia and the United States. It has matched this arsenal with delivery systems generally inferior to those of the two superpowers.

The second part of this is beginning to change, with the caveat that the boomer fleet remains substantially behind Russia or US standards.  However, it’s not yet certain that the first part is changing.  For example, there’s no indication that tactical nuclear warheads have become relevant to China’s conventional warfighting plans, as remains the case with the Russian military. Indeed, China has concentrated on developing the conventional capabilities of systems often associated with nuclear weapons, such as ballistic and cruise missiles.  The achievement of secure second strike, especially in context of the arsenal reduction by the two nuclear superpowers, does not require a massive expansion in the number of Chinese weapons. It simply requires making them more survivable.

We probably aren’t headed back to the reality of the 60s and 70s, when the US and the USSR faced off with thousands of tactical and strategic warheads apiece. But much depends on how China approaches the expansion, apart from the modernization, of its nuclear arsenal.