Should America Fear the China-Russia Relationship? 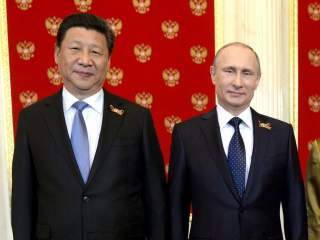 China and Russia have increased their security, economic and diplomatic relationship, complicating an already fragile Asia-Pacific region. Many analysts have viewed this enhanced collaboration as the beginning of a partnership set on destabilizing the Western-led order and diminishing the capacity for the United States to influence strategic outcomes in the region. But this line of reasoning affords primacy to the material components of Beijing and Moscow’s newfound affection for each other, neglecting the salience of the historical and normative elements that inform their relationship.

In fact, the perceived belligerency of this China–Russia nexus is driven by a shared historical and ideological connection, which has manifested in both states adopting an authoritarian style government. Some analysts perceive this rigid style of governing as a representation of their mutual mistrust of the West, and a shared desire to rewrite the rules that shape the global order.

The willingness of Russia and China to deploy, or threaten the use of, military force to further their national interest, and challenge existing regional security orders, appears to confirm such pessimistic assessments. Whether it is Russia in Ukraine, or China in the South China Sea, both have demonstrated a militaristic disposition to resolving their historical territorial grievances. According to one such view, “Russia and China are now competing to arm anti-democratic and anti-U.S. regimes in Latin America, and may be cooperating to help Nicaragua build a trans-ocean canal, which may yield port access for Russian and Chinese warships. Both countries actively support U.S. enemies in Syria and Iran.”

An Axis of Convenience

Notwithstanding such commonalities between Moscow and Beijing, however, there are reasons to believe that the current status of the China–Russia relationship will remain an “axis of convenience.” This representation acknowledges that while both Putin and Xi have developed a stronger connection, which now recognizes each other’s core interests, it nonetheless fails to raise the relationship to one of alliance status.

Diplomatically, Russia and China have often exhibited their shared interests through the use of their veto power in the U.N. Security Council. In the past decade, China has used six vetoes, each in concert with Russia, which has used its veto eleven times in the same period. Most recently, this alignment was exhibited in Moscow and Beijing’s vetoing of four U.N. resolutions on Syria since 2012. This excessive use of the veto has been understood as both a challenge to Western leadership and a tool to slow down the pace of American military interference in the Middle East.

Yet, as Daniel Brumberg and Steven Heydemann have argued, this is a negatively-oriented alignment derived from “opposition to the universal norms of democracy, global governance, and human rights promoted by the West and by multilateral institutions such as the United Nations and the International Criminal Court”. This stance ultimately results in a diplomacy that defends “a distinctly status-quo or conventional notion of state sovereignty that is at variance with new global conventions” such as Responsibility to Protect (R2P). This is reflected in, for example, Beijing’s insistent calls for the principle of “non-interference” to be upheld throughout the Syrian crisis.

Economically, China and Russia are collaborating on the development and maintenance of new commerce institutions, like the Asian Infrastructure Investment Bank, and the New Development Bank BRICS. Furthermore, both states have developed a consensus on China’s “Silk Road Economic Belt” and Russia’s “Eurasian Economic Union”—where a willingness to coordinate the two projects in order to build a “common economic space” has begun to emerge.

Accordingly, bilateral economic relations are a primary ingredient of the China–Russia “axis of convenience”. In 2011, China became Russia’s largest trading partner, and in the last twelve months alone, China’s investment in Russia has grown by 80 percent—bringing their annual bilateral trade to $100 billion dollars. Most notable among these transactions is the $400 billion oil and gas pipeline linking Siberia’s Chayandinskoye oil and gas field to China. And in this context, it is feasible that China is “hedging” their transport routes in order to mitigate against any future blockades in the South China Sea.

China and Russia have also increased their security cooperation, something that has been dormant for forty years. This includes a substantial Chinese defense acquisition program of Russian military hardware, with the recent purchase of twenty-four Sukhoi jets being the most notable. This partnership has extended to joint military training and exercises, which recently occurred in the Sea of Japan, and featured twenty-two vessels, twenty aircraft, forty armoured vehicles and five hundred marines.

Little Chance of a Formal Alliance

With these considerations in mind, the Beijing–Moscow relationship faces many challenges that will inhibit progression to a formal alliance. Foremost is the lingering perception within Russia that China remains a threat to their security. Whilst this viewpoint stems from historical mistrust, the territorial integrity of Russia continues to be viewed with a level of anxiety, due to heightened Chinese migration, coupled with an extensive shared border.

Conversely, many analysts have pointed to China’s inherent understanding of Russia as an inefficient business partner. In this sense, China perceives Russian business laws as being unfavorable to China’s interests, thereby dissuading substantive economic collaboration. As Bobo Lo stated, “The Chinese regard the Russians as difficult business partners. They complain, first, that commercial ties are often hostage to geopolitical fortune. It seems there are always ulterior motives.” Indeed, such laws likely stem from the high levels of xenophobia within the Russian Federation, and the need to be receptive to the wave of discontent towards ethnic migration.

Such representations play into broader notions of Western relations. In this sense, Russia remains skeptical of China’s long game, and whether China legitimately views the West as an enemy—as supposedly Russia does—or a critical partner in their future success. Such an acquiescent Chinese view of the West would hamper China from becoming too close to Russia, as it would impede upon China’s capacity to be an “equal” global leader with America.

Similarly, while Russia has strengthened their bilateral relations with China, there remain questions around Putin’s broader Asian policy. Putin has never attended the East Asia Summit, and prior to the imposition of European economic sanctions, prioritized engagement with Europe, over that of Asia. Such ambiguity leaves open the possibility that a future Russian president will pursue a policy of mending relations with the West, whereby the Russia–China axis would become obsolete.

Indeed, Russia’s tumultuous oil industry may require Russia to saddle back up with the West. While Russian oil production is currently on the upside at 10.8 million barrels per day, this is forecasted to peak in the next twenty years. The growing global appetite for a green future, and the potential for China to tap into their own shale gas reserves, alongside the abating value of oil, may ultimately mean that Russia will be required to reach out to the West for its economic survival.

When viewed through this prism then, China and Russia share little in the way of a future vision, but rather their relationship is built upon achieving their own individual aims. And because of this, the United States is best served fostering dialogue with Russia and China. The United States needs their cooperation in many of the most pressing global issues of the day. The success of key international initiatives, such nuclear non-proliferation, the downing of flight MH17 and the ongoing crises in the Middle East, demands the partnership of China and Russia. And any global political fragmentation will only detract from resolving these critical issues.