Should America Reengage with North Korea? 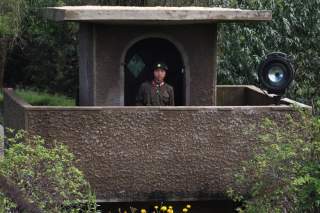 This week, Chinese President Xi Jinping visits South Korean President Park Geun-Hye in Seoul, and next week, Secretary of State John Kerry and Secretary of Treasury Jack Lew will meet with Chinese leaders in Beijing. These meetings provide an opportunity for the three countries to consider next steps on the vexing problem of North Korea’s nuclear and missile programs—and in particular, to discuss whether and under what conditions to resume multilateral talks on the denuclearization of the DPRK.

The last round of Six Party Talks—involving North and South Korea, China, the United States, Japan, and Russia—was held in December 2008. Since then, the Obama administration has been reluctant (understandably so) to resume the six-party process, given the North’s provocative behavior and little evidence that a return to the process would produce meaningful results.

The administration has been determined to break the cycle in which the North Koreans engage in destabilizing activities, receive compensation in terms of economic and other benefits for suspending those activities, and then eventually renege on their commitments and resume those activities whenever it suits them. So instead of responding to provocative behavior by returning to the talks, the United States has favored what some observers have called “strategic patience”—resisting engagement and opting instead for stepping up economic and political pressure in the hope of altering Pyongyang’s strategic calculus and bringing the North’s leaders to the conclusion that the only sensible approach is to change course fundamentally.

But strategic patience has not produced better results than previous policies toward North Korea. Indeed, over the last five years—spanning the death of Kim Jong-il and the succession of his son, Kim Jong-un—the situation has steadily deteriorated.

North Korea has perpetrated murderous acts against the South, sinking an ROK naval vessel and shelling a South Korean island, killing both civilians and military personnel. With nuclear tests in 2009 and 2013 and test launches of short-, medium-, and long-range missiles (including in the guise of civilian space-launch vehicles), it has enhanced its capability to strike U.S. allies and eventually the U.S. homeland with nuclear-armed ballistic missiles. It has publicly renounced the goal of denuclearization and stressed that its nuclear-weapons program is permanent. Contrary to UN Security Council resolutions, it has continued to peddle arms and perhaps sensitive technologies to other countries. With inspectors of the International Atomic Energy Agency (IAEA) no longer given access, the ability to monitor and understand DPRK intentions and capabilities has sharply degraded. The regime’s treatment of its own people remains abysmal. And while sanctions have increased and reinforced North Korea’s international isolation, China’s continued reluctance to use its leverage decisively against Pyongyang has enabled its leaders to evade tough choices.

Of course, some problems don’t have solutions, at least not at a price we are willing to pay. The North Korea nuclear issue may be one of them. Perhaps the best we can do is manage the problem—limit the damage as much as possible.

But this is a problem with enormous stakes for U.S. national security, for our allies, for the stability of Northeast Asia, and for the global nonproliferation regime. And it seems headed in a dangerous direction. Left to continue on that trajectory, things could get a lot worse. Simply managing the problem could become a very risky strategy. So, as frustrating as dealing with the North Koreans has been over the last two decades and as skeptical as we have every right to be about prospects for success, we should now give serious consideration to whether more active engagement with the North could serve U.S. interests.

For the last several months, China has energetically sought to build support for a resumption of the Six Party Talks. The North Koreans have asserted their readiness to return to the negotiating table without preconditions, presumably hoping to realize the economic and other benefits of engagement. But they have resisted reaffirming their previous commitments to suspend nuclear activities and pursue denuclearization, especially those contained in the September 2005 six-party joint statement. For their part, the United States, South Korea, and Japan have seen little point in resumption unless Pyongyang is willing not only to recommit to the goal of denuclearization, but also to lend credibility to that commitment by taking concrete steps to restrain its nuclear and missile programs.

In its role as intermediary, China has strongly encouraged the North to recommit to denuclearization and adopt measures of nuclear and missile restraint. Beijing has grown increasingly aggravated by the provocative and erratic behavior of the Kim Jong-un regime, especially by the execution of Jang Song Taek (Kim’s uncle and China’s main conduit to the North Korean leadership) and by North Korea’s defiance of its pleas not to carry out nuclear and missile tests. China’s disenchantment with its erstwhile ally has reportedly led to an active internal debate about whether the North has become more of a liability than an asset, but it has not yet led to a decision to exert the kind of powerful pressures that Chinese leaders fear could undermine the Kim regime and destabilize the region.

Working closely with the United States—consistent with the Xi-Obama agreement at the 2013 Sunnylands summit to cooperate on North Korea—China pressed North Korea to take steps to demonstrate a genuine commitment to disarm. But the North adamantly refused to adopt constraints in advance of the resumption of the Six Party Talks, instead claiming that it could take steps once the multilateral process reconvened. Stymied by North Korea’s position, China has turned, in frustration, to the United States and South Korea and urged them to lower their requirements for getting the talks underway. The conditions for resuming Six Party Talks are expected to be discussed at the current high-level meetings in Seoul and Beijing.

The question of whether and under what conditions to resume Six Party Talks is a tough one for the Obama administration. There are understandable reasons for resisting engagement, or at least setting a very high bar for resumption. Given the disappointing track record of dealing with the DPRK over the last twenty years, the investment of time and energy may be hard to justify, especially when the likelihood of success is so uncertain. Moreover, the American public and opinion leaders have been content to keep the North Korea problem on the back burner in recent years. Gaining their support for elevating the priority assigned to the DPRK—particularly when so many other difficult issues are crowding the U.S. foreign-policy agenda—may be a challenge.

But there are also good reasons for reengagement. Even if prospects for complete denuclearization are remote, engagement could, at least in the near term, reduce the likelihood of dangerous North Korean provocations against the ROK and other U.S. interests. It could produce constraints on DPRK programs that would curb the momentum toward the capability to threaten the United States with nuclear-armed missiles and buy time for strengthening U.S. and allied defenses against such capabilities. Through direct contacts and renewed IAEA access, it could also give us better insights into the regime’s thinking and a better handle on its strategic programs.

Given the potential risks as well as the potential benefits, it would make sense—before deciding whether to resume Six Party Talks—to test whether North Korea is prepared to engage seriously, particularly whether it is willing to accept meaningful constraints on its nuclear and missile programs.

The most effective way to test Pyongyang is through bilateral U.S.-DPRK exploratory discussions. China has made genuine and persistent efforts to persuade North Korea’s leadership to take the steps necessary to get the multilateral talks underway. But notwithstanding Beijing’s impatience with its neighbor and its increased emphasis on the imperative of denuclearization, Chinese and U.S. interests on the North Korea problem, while converging, are not identical. The United States needs an unfiltered view of DPRK positions that it can only get through direct, face-to-face contacts. And only through such contacts can the U.S. administration ensure that its requirements are set forth as clearly and forcefully as necessary, without trimming or blurring those requirements for the sake of accommodation.

This is not to suggest that the administration should turn this into a bilateral U.S.-DPRK matter or relieve China of its major responsibility for helping engineer a solution. The North Korea problem belongs to the region and the international community generally, and progress must be made multilaterally and with China playing a leading role. It is just to suggest that the United States is in the best position to test North Korea, but Washington should do so in close consultation with, and with the support of, its partners in the six-party process.

Regarding what the United States should seek in any bilateral exploratory discussions, it is probably unrealistic to expect Pyongyang to agree to implement concrete constraints in advance of the formal commencement of Six Party Talks. Instead, in the course of such bilateral discussions, the United States should seek to nail down the specific steps the North Koreans would be willing to commit to in the first few days of the resumed talks—and the specific timeframes in which it would implement those steps. If the talks commenced and the North failed to follow through with the agreement reached in the exploratory discussions, there would be clear grounds for calling a halt to the process.