Should America Tackle All Authoritarian Governments? 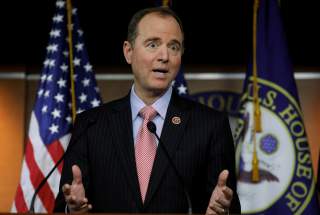 This past February, California Democrat Adam Schiff, who is chairman of the House Intelligence Committee, wrote an open letter to his Republican colleagues in the Washington Post. In it, he stated, “The time for silent disagreement is over. You must speak out.” Since then, Schiff has moved steadily not only to investigate the Trump administration’s ties with Russia, but also to launch a broader crusade against authoritarian regimes abroad, defining their very existence as a threat to American democracy. By his logic, America should embark upon a permanent campaign against autocracy, anywhere and everywhere it might appear.

This past Tuesday marked the first hearing of the House Intelligence Committee in the new congressional term, now under Democratic control. While there is a laundry list of topics the committee could have chosen to begin with, Schiff was adamant about tackling what he refers to as “an issue that may surpass them all in importance, and yet underlies each: the rise of authoritarianism and the threat to liberal democracy around the world.” His arguments were prefigured in an essay that he wrote earlier in the week for the Atlantic in which he stated: “Across the globe, democracies are mired in an ugly brand of populism often directed against ‘the other,’ and are displaying a troubling receptivity to autocracy as an alternative model of governance. If these trends continue, it will be a tragedy for humankind and a disaster for our national security.”

The language is apocalyptic, the claims sweeping. What amounts to Schiff’s personal mandate for leadership inadvertently underscores that much of the Washington foreign policy establishment continues to cling to the verities of the Cold War. Since the fall of Soviet Communism in the early 1990s, the United States has lacked an opposing ideology with the influence to act as an existential threat. Even at the height of the War on Terror, the prospect of radical Islam conquering the world as an idea was never a possibility. In the decades-long search for a new raison d'etre, Schiff has fastened on the broadest of all—opposing authoritarian governments.

In theory, this might sound like a good idea, but in practice it raises a host of questions—none of which were really addressed by the speakers that testified to the committee. America has long practiced a selective morality about what regimes it supports. Is Saudi Arabia less heinous than Iran? At what point does a regime qualify for autocratic? Should the so-called “illiberal democracies” such as Hungary be banned from polite society? And so on.

Appearing before the committee, Andrea Kendall-Taylor of the Center for New American Security warned against the rise of “personalist regimes.” Saying that their number has increased since the Cold War; these authoritarian governments concentrate power in a single individual whose personalities dominate the entire society. According to Kendall-Taylor, these personalist autocracies are the worst forms of government, tending to be the most war-like, the most volatile and the most corrupt. Her list of examples includes Russia’s Vladimir Putin, Turkey’s Recep Erdogan, Egypt’s Abdel el-Sisi, and North Korea’s Kim Jong-un.

Teng Biao, a human rights activist and lawyer, described his persecution at the hands of the Chinese government, including the use of torture. When ranking member of the committee Devin Nunes (R-CA) described China as authoritarian, Biao corrected him, calling it totalitarian. He believes that all media outlets from China ought to be registered as foreign agents that disseminate government propaganda, an action that Congresswoman Jackie Speier (D-CA) seemed to approve.

Former Danish prime minister and Secretary General of NATO (2009-2014) Anders Fogh Rasmussen used his appearance to focus on U.S. and European interests. When it comes to NATO member Turkey, high on the committee’s focus of authoritarian governments, Rasmussen said that increased dialogue was the most important thing. He said that just because a country happens to be authoritarian, doesn’t mean that it isn’t necessary to work with it in some circumstances, and it was crucial that Turkey be kept western-oriented. Rasmussen was quick to defend the performance of European states against accusations, especially by President Donald Trump, that they aren’t pulling their weight. While “NATO is nothing without American leadership, let’s face it,” admitted Rasmussen, European partners are fully committed to the project, and not everything has to be about money.

But the star of the hearing was former Secretary of State Madeleine Albright. According to Albright, as a rule of thumb the United States should not cut off diplomatic relations with foreign countries. Diplomacy with Iran and North Korea would have been easier in recent years if the United States had had missions stationed there, and this was among the reasons it was important to properly fund the State department. “It [diplomatic relations] is not a gift, it’s the way countries and leaders communicate with each other,” she said.

“NATO is not just a military alliance, it’s a political alliance of democracies,” Albright continued. When asked by Congressman Mike Quigley (D-IL) about Poland, the former secretary of state said that the ruling Law and Justice Party was undermining the independent judiciary. She also had strong criticisms of Viktor Orban’s Hungary, an experiment in state-directed traditional values that he calls “illiberal democracy.” Albright said the idea of illiberal democracy was a “crazy term.”

She had strong words for Russia as well. “I personally owe an apology to now-Senator Romney, because I think that we underestimated what was going on in Russia,” said Albright, referring to comments Romney made during a 2012 presidential debate. “Putin is just a flatout dictator,” she puffed, saying that the former KGB officer had made strong plays out of a weak hand.

In questioning the four guests before the committee, some lawmakers used the occasion for rhetorical flourishes. Val Demings (D-FL) said that, “I believe that when the United States fails to lead, the whole world is out of order and off balance.” In creed, echoing Albright’s terming of the United States as the “indispensable nation,” lends itself to foreign policy excess, as witnessed by the last twenty years. Mike Conaway (R-TX) asked Biao if the Chinese people had the drive to change their government, since in contrast “it’s genetically wired in us [Americans] to be a free people.” The congressman seems to think the ability for self-government has a genetic origin.

Andre Carson (D-IN) asked about the support of authoritarian regimes for terrorism, specifically if Vladimir Putin was responsible for false-flag attacks. The former received an affirmative from the panelists, who all chose to side-step the latter question. Rick Crawford (R-AR) asked how it was possible to hurt authoritarian governments without hurting the people, to which Rasmussen and Albright responded uniformly, “targeted sanctions.”

With this committee hearing, Schiff is following in the footsteps of Woodrow Wilson, whose failed attempt to “make the world safe for democracy” he cites in his Atlantic op-ed. If the United States makes itself an adversary of all non-liberal autocracies in the world, the “indispensable nation” has its work cut out for it. “Foreign policy is just trying to get some country to do what you want, that’s all it is,” quipped Albright. It’s easier said than done.