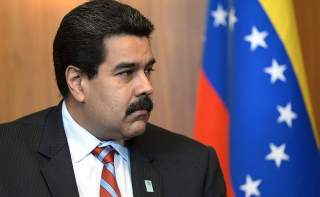 With Venezuela increasingly resembling a failing state, it seems there is no solution or savior capable of pulling the country out of its downward spiral towards chaos. While the country is going through an unprecedented economic and political crisis, its population of almost 30.5 million is being hit with mounting crime, triple-digit annual hyperinflation, a collapse of all essential public services, and widespread shortages of basic supplies.

At the backstage of the crisis taking place in Venezuela, there is an ongoing story which is being overlooked: the implications for China, which has been Venezuela’s greatest economic supporter since the beginning of the Chávez regime in the late 1990s, and its foreign and economic global policy.

It is unsurprising why China has been increasing its support for and ties with energy-rich Venezuela. It is the tenth-largest oil producer in the world and owner of the largest proven oil reserves (about 298 billion barrels). Beijing has long viewed Venezuela as its entry point to Latin America. When Chávez launched his policy of anti-Americanism (which Nicolás Maduro continued), the former needed an economic partner to fill in the gap. This provided China the opportunity to increase its presence via economic aid. Within a few years, Venezuela became Beijing’s largest borrower outside of Asia and the third-largest overall recipient of Chinese aid—receiving around 52 percent of all such aid to South America.

Over the last sixteen years, China has provided over $125 billion to Venezuela ($57 billion since 2007) in the form of direct aid or very favorable loans. Venezuela repays many of these debts by shipping cheap crude oil to China (some estimate the return rate to be around $7 billion a year). In exchange, Venezuela grants Chinese companies priority in government projects sponsored by Chinese loans. In 2008, the China Development Bank launched a $6 billion fund with Caracas to support such projects. One such project was the 470-kilometer Tinaco-Anaco railway, which China financed and supervised with leadership from the China Railway Group Limited. But like many public projects in Venezuela, it was derailed by poor management and corruption. The project is already four years overdue, and there are no signs that it will ever pick up again.

The Tinaco-Anaco railway project tells the story of the Venezuelan economy in recent years. As oil prices and the overall political situation declined, so did the Venezuelan oil economy—spiraling to the brink of bankruptcy, as ninety-five percent of Venezuela’s export income comes from oil. With its foreign reserves plunging to a thirteen-year low of $12.6 billion—and with yet another $10 billion in debt repayments due in 2016—many analysts fear that Venezuela is unable to repay its debt and that a default will inevitably take place within months.

In addition, when Venezuela began sending daily oil shipments to China, prices were $100 a barrel, which meant it needed to provide a reasonable sum of about 228,000 barrels per day. Given today’s prices, the OPEC member needs to provide almost four times more to satisfy its obligations, an expectation that may prove highly difficult to meet. Thus, China finds itself in a dilemma regarding Venezuela: stave off default via increased aid and investment loans in the hopes of current oil prices ($40 to $50 per barrel) stabilizing, or let the Venezuelan economy collapse. Such a move could lead to a new government in Caracas (or even the current one under the increasingly likely scenario of a default) shifting oil supplies to clients willing to pay in much-needed cash – at the expense of the daily deliveries to China.

As the Venezuelan opposition is trying to force the referendum to remove President Maduro to take place before January 2017. If it takes place after that date, a successful recall vote would transfer power to Maduro’s vice president and party fellow, Aristóbulo Istúriz. If the decision is made to hold the referendum before January 2017, China will likely hold off with future loans until the situation clears up.

At the moment, investors and governments are paying much attention to China’s reaction to the Venezuelan crisis so as to gleam how it would respond to such a high-magnitude default—and how it could impact the country’s global economic policy.

Oren Kesler is Research and Projects Team Leader at Wikistrat.