Should China Police the Strait of Hormuz? 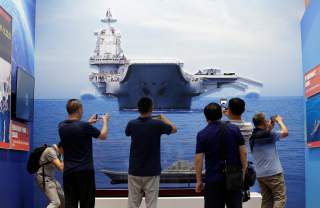 Through the course of 2019, the United States has been to the brink and back with Iran more than once. First, several oil tankers came under attack. Next, a (rather expensive) U.S. drone was shot down by the Iranians in late June. Then came the attacks against the Saudi oil facilities in September. Washington’s myriad hawks are hopping mad that the Pentagon has not been permitted to teach Tehran a devastating lesson in response to its mischief. American credibility the world over, they contend, has been jeopardized.

Doves and non-interventionists, by contrast, are celebrating the U.S. president’s evident reluctance to start yet another war in the Middle East. They are further buoyed by the partial pullout from Syria and note that deep tensions with Iran date from the exit from the nuclear accord. Poor John Bolton was sent packing after all these machinations, but may yet be plotting his ultimate political revenge much to the delight of the salivating press corps. In any case, the recent killing of Abu al-Baghadadi seems like a perfect opportunity for the United States to declare “victory.”

In the midst of all these rather surprising events in the Persian Gulf, not to mention that usual swirl of political intrigue in Washington DC, American strategists (with only a few exceptions) may have missed a rather important inflection point for the future of world order. During the late June 2019 crisis in the Persian Gulf, the American president made a startlingly candid observation (even by his standards): “China gets 91 percent of its oil from the Straight (sic), Japan 62 percent, and many other countries likewise. So why are we protecting the shipping lanes for other countries (many years) for zero compensation. All of these countries should be protecting their own ships …”

Such a statement naturally left all the “dragon-slayers” (many within the most senior ranks of Trump’s own administration) in Washington turning several shades of purple, as they grappled with the President’s seemingly open invitation to Beijing for dispatching large-scale military forces to the Persian Gulf. For said China hawks, the United States has already all but surrendered the South China Sea, starting with the Scarborough Shoal incident in 2012 and leading logically to Philippines president Rodrigo Duterte’s quirky rapprochement with Beijing, so this might as well be the last nail in the coffin of the cherished American global preeminence.

But what does China make of this intriguing invitation to drink directly from the chalice of world power? A rather complete analysis was published in the naval affairs magazine Modern Ships [现代舰船] during the late summer of 2019 (issue # 16) under the title: “Should China Undertake Escort of Navigation in the Strait of Hormuz [中国应该当在霍尔木兹海峡实施护航吗]?” This edition of Dragon Eye will focus on dissecting that article, which offers interesting arguments on both sides of the seemingly nascent Beijing debate on the matter.

To begin with, the article quite accurately contests Trump’s assertion that 91 percent of China’s oil comes through the Strait of Hormuz. While admitting that five out of ten of the top oil exporters to China are located in the Persian Gulf, the author submits that that the actual number is “about 44%.” Thus, “China is not one of the countries that are most dependent on Persian Gulf oil [中国并不是对波斯湾石油依靠存度最高的国家].” By contrast, the author submits that Japan is at 88 percent and South Korea’s number is also exceedingly high, at 82 percent.

The article does catalogue several incidents in which Chinese civilian sailors have been killed or gravely wounded in violence against ships passing through the Strait of Hormuz. The analysis, moreover, assesses that it would be “very easy for a neighboring country to blockade [this strait], so that no civilian ship could transit … [很容易被周边国家关闭或封锁而导致民航无法通过].” Looking at the history of warfare in this area, this Chinese analyst explains that the U.S. and its allies deployed 175 warships during the Persian Gulf War, but insurance rates for civilian ships entering the Gulf at that time still tripled.

According to this Chinese rendering, there are many Westerners actually advocating for the PLA Navy to take up station in the Strait of Hormuz. Some are apparently “urging” China to send ships to the region. A former U.S. intelligence official is said to have taken a more critical tone with a similar recommendation: “China has not sent any money, but they continue to enjoy the security we provide [中国没出一分钱, 却能享我们提供的安全].” An Australian study is also cited that apparently says China “has a surface fleet with ample experience with escort” from the Gulf of Aden anti-piracy operations, as well as the nearby base in Djibouti. A Hormuz Strait patrol could provide China, moreover, with additional “transnational exposure” and experience on the global stage, it’s reported, even while “making some accomplishment for the international public interest [会为国际公益事业作出贡献].”

Nevertheless, “the author believes that the Chinese Navy undertaking escort operations in the Strait of Hormuz, is perhaps not so simple.” It is asserted that comparing such a mission to the Gulf of Aden anti-piracy operations is rather superficial. Pirates make for a weak and easy target, it is explained. In hypothetically patrolling the Strait of Hormuz, “… what is the adversary we are defending against [我们防备的是什么对手呢]?” The author contends that the most severe aggravating factor for the region’s security is plainly the tensions between Washington and Tehran. Furthermore, “If our side was to undertake escort operations in the Strait of Hormuz, it’s very likely that a conflict would occur with one or more Persian Gulf coastal states…” In the end, it is stated more bluntly that the Chinese Navy is not at all likely to take up this mission. China will apparently take no action to support U.S. sanctions against Iran, nor will it support Iran’s nuclear plans either. Moreover, Beijing will avoid getting dragged into a conflict between Saudi Arabia and Iran, according to this Chinese naval analysis.

True, if a war breaks out, then China might in those circumstances consider sending warships, it is noted. Yet, for now, Beijing seems quite content to focus on decreasing its reliance on the Persian Gulf by increasing its import of energy from both Russia and Central Asia, according to this article. At the same time, it is asserted that China should “resist and reduce the ability of other regions or great powers seeking to dominate the Strait [抵制和减少其他区域或外大国企图独霸海峡的影响力].”

According to this article, China views Iran’s military power as “rapidly increasing,” but considers the possibility of an Iranian blockade of the Strait of Hormuz as a pyrrhic victory for Tehran, at best. The author is unequivocal: “China … should not rashly undertake a military intervention in this region [中国不是贸然对该地区进行武力介入].” On the other hand, the PLA Navy should keep its powder dry, it is implied, as the author counsels peace-time preparation, such as gaining a solid familiarity with the area’s bathymetry and hydrological conditions. Likewise, Beijing is advised by this Chinese strategist to develop an “emergency warning” system to respond to crises in this most volatile part of the world.

At least for now, so it seems the Chinese are just too clever to get stuck in the Middle East quicksand, which has held Americans fast now for more than a couple of decades.