Should Europe Abandon Its Migrant Deal with Turkey? 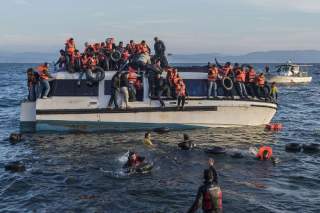 Diplomatic tensions between Turkey and the EU are rising. The EU has condemned Turkey’s crackdown on human rights and civil liberties since the July 15 coup attempt. Ankara believes that the EU did not express adequate political support for its democratically elected government as the coup unfolded. Their rhetorical saber rattling has raised concerns that the EU-Turkey migration agreement will collapse. Intense negotiations between Germany’s Angela Merkel and Turkish President Recep Tayyip Erdogan during the recent G-20 Summit did little to mitigate their differences. With migrants and refugees dying at sea at an unprecedented rate, the EU must renegotiate the deal or prepare for its failure.

The EU-Turkey deal was designed to stem the flows of refugees and migrants fleeing across the Aegean, while financially boosting Ankara’s ability to host them. Its success has been mixed. The number of migrants crossing from Turkey to Greece per day has decreased from 1,740 before the deal to 48 by June. But the migrant influx has merely shifted elsewhere. Italy has experienced a dramatic increase in migration, logging about 105 thousand arrivals so far this year. New smuggling routes often entail a dangerous journey across the Libyan coastline, where migrants fall prey to human traffickers and the same terrorist organizations from which they initially fled. This perilous journey has generated a mounting death toll at sea that represents a sharp increase from the same period last year; 3,501 people died crossing the Mediterranean since the beginning of 2016 and 322 have died during so far in September alone. Moreover, the closure of the Balkan route may have been a greater factor in stopping migration flows than the EU-Turkey deal. Interminable processing delays in Greece have also kept migrants from proceeding, although they have created a new and growing crisis within Greece.

The EU-Turkey deal included basic conditions that Turkey must fulfill in order to receive visa liberalization from the EU. In this respect, the deal has generated little progress. Turkey has refused to reform its anti-terror laws in accordance with EU law and backtracked on the human rights commitments that the EU requires. It has threatened to reintroduce the death penalty, which would end its membership bid. NGOs and international observers have also documented cases where Turkish border patrols have abused refugees and migrants.

Despite all this, the Turkish foreign minister has demanded that the EU drop visa requirements for Turkish citizens by October. Ankara has also threatened to unleash a flood of migrants on Europe. Germany has said that Europe “must not be blackmailed” over the issue. But if Europe will not be blackmailed—and if it does not wish to make a mockery of its human rights commitments—Europe must be prepared to walk away from its deal with Turkey. The EU should assume that the Turkey deal will collapse in October and plan accordingly now. Brussels seems paralyzed to act on the migrant crisis. But historically, Europe has shown its willingness to unite to fight common, urgent threats.

To protect both human rights and its own security, the EU must devote more resources to migrant processing and integration. Failure to process migrants quickly, and failed migrant integration programs, likely contributed to recent terror attacks. The Ansbach attacker, for example, was a rejected asylum-seeker. New research shows that speeding up the processing of asylum claims would also help significantly in integrating newly arrived families and unaccompanied minors. Faster processing would reduce the waiting period—costly to both migrants and states—during which individuals cannot work and contribute economically to host communities. The EU’s twenty-eight member states must also harmonize their asylum processes to expedite the safe returns of individuals who do not qualify for asylum. This will ensure that people embittered by negative asylum decisions do not exact revenge. It will also reduce clogged and expensive reception facilities and improve protection for those who need it most.

Second, the EU must bolster its border-processing capabilities in Greece and Italy. Years after massive numbers of migrants began reaching its shores, the EU has yet to devote adequate resources to process asylum-seekers. So far, Greece has only received twenty-seven of the four hundred asylum specialists and twenty-four of the four hundred interpreters the EU has promised. Italy still lacks basic border-processing equipment to register and track migrants before they travel elsewhere in Europe. Detention facilities and camps in both countries barely meet basic human rights standards. The EU must invest to improve these.

Third, the EU must stop Turkey from making good on its threats to expel migrants. If diplomacy fails, the EU must increase patrols of its land and maritime borders with Turkey. Under international law, the EU cannot return migrants to a place where their lives would be in danger. The EU must therefore arrange for temporary protection or safe third-country processing and hosting of those who cannot remain in Europe.

The EU must not allow itself to be bullied by an increasingly tyrannical state. By acting now, Europe can preserve the collective ideals that make it a union, protect itself from terror, and defend human rights. It is only a matter of time before the EU-Turkey migrant deal collapses. Now is the time to prepare.

Jill Goldenziel is Associate Professor at Marine Corps University-Command and Staff College. The views expressed here are her own and do not reflect those of her university or any other arm of the U.S. government. Carl Hvenmark-Nilsson is a Visiting Fellow at the Center for Strategic and International Studies.