Showdown in the South China Sea: America Takes On China 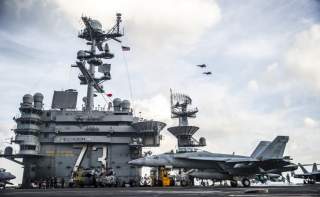 During his intimate retreat with President Barack Obama back in 2013, Chinese President Xi Jinping boldly claimed, “The vast Pacific Ocean has enough space for two large countries like the United States and China.” Reinforcing lingering suspicions that he was perhaps calling for a Sino-American co-dominion in the Pacific theater, the Chinese leader proposed a “new model of great power relations,” where Washington and Beijing will effectively treat each other as peers with respective zones of influence in the area.

To be fair, Xi’s proposal for a new regional order—what I have called Pax Chimerica—was based on an earlier joint statement between the Hu Jintao administration in China and the newly-installed Obama administration, which has framed Sino-American relations as “the most important bilateral relationship in the world.” The November 2009 joint statement between the two powers quite controversially stated, “The two sides agreed that respecting each other’s core interests is extremely important to ensure steady progress in U.S.-China relations.” For Beijing, one of those “core interests” is safeguarding China’s territorial integrity and sovereignty claims, which have progressively expanded from peripheral restive regions such as Tibet and Xinjiang to Taiwan and, in more recent years, much of the South China Sea.

Leaving little doubt vis-à-vis his administration’s commitment to consolidate China’s territorial interests in adjacent waters, Xi Jinping, shortly after taking over power, warned: “No foreign country should ever nurse hopes that we will bargain over our core national interests… Nor should they nurse hopes that we will swallow the bitter fruit of harm to our country’s sovereignty, security and development interests.” Within less than a year, China embarked on a massive construction bonanza across the disputed Spratly chain of islands in the South China Sea, artificially turning rocks and atolls into full-fledged islands that will host advanced airstrips and military facilities.

As a result, China has directly challenged not only the territorial claims and sovereignty rights of smaller Southeast Asian claimant states, which have been heavily outmatched by a giant neighbor that is laying claim to land features and resources well beyond its 200-nautical-mile Exclusive Economic Zone, but it is also imperiling freedom of navigation and overflight in the area. Unlike other maritime superpowers throughout history, from the Netherlands and Britain in early modernity to the United States today, China is treating adjacent waters as an extension of its continental territory, its national “blue soil.”

Given the massive power asymmetry between China and its smaller neighbors, only the United States has the wherewithal to challenge Beijing’s unremitting quest for maritime dominance in East Asia. And to the delight of its Asian allies, particularly the Philippines and Japan, the Obama administration is finally poised to draw a line in the sand, challenging China’s great wall of sand in one of the most vital Sea Lines of Communications (SLOCs) on earth.

Refusing to acknowledge China’s sovereignty claims over artificially created islands in the area, the United States Navy (USN) will pierce into the twelve-nautical-mile radius of Beijing-occupied land features. It is a move that is both urgent and risky, simultaneously carrying the promise of reining in Chinese maritime assertiveness and provoking a confrontation with Asia’s superpower. Asia is at a critical juncture, with Beijing challenging the USN’s carte blanche to roam China’s near seas, while the United States is challenging China’s carte blanche to transform the South China Sea into its domestic lake.

In The Interest of America in Sea Power, Alfred Thayer Mahan underscored the importance of maritime dominance to great power politics, arguing: “Control of the sea, by maritime commerce and naval supremacy, means predominant influence in the world; because, however great the wealth product of the land, nothing facilitates the necessary exchanges as does the sea.” Mahan’s works undergirded America’s gradual expansion across the Pacific, with its naval forces eventually emerging as the de facto guarantor of freedom of navigation in the area after the Second World War.

Despite all the advancements in technology and land-based infrastructure, about 90 percent of global trade is still carried through maritime routes. The South China Sea is an artery of global trade, facilitating $5 trillion in international trade, $1.2 trillion of which is bound for the United States. It also serves as a key transit route for the bulk of the energy imports of major Asian economies such as Japan, South Korea and China. Unlike the Persian Gulf, which is also a major transit point for hydrocarbon trade, the South China Sea is vital to the global food supply, accounting for as much as 10 percent of world fisheries’ supply. Hundreds of millions of people across the region depend on the South China Sea for their daily diet.

Though Washington has not ratified the United Nations Convention on the Law of the Sea (UNCLOS), thanks to the intransigence of some members of the U.S. Senate, the USN observes the relevant provisions of the UNCLOS as a matter of customary international law. No wonder, then, that Washington has allowed Chinese military vessels to pass through its EEZ in the Pacific as well as twelve nautical miles’ territorial sea off the coast of its Alaskan territories. Together with its allies, Washington has undergirded freedom of navigation across the globe, securing the foundations of unimpeded international trade and maritime security.

China, the world’s leading trading nation, has been the biggest beneficiary of this American-led order. Ironically, Beijing has also emerged as the biggest challenger to this order. For much of the twentieth century, China was preoccupied by internal political upheavals, resistance against external predators and protection of its continental borders. The twenty-first century, however, has seen the emergence of a more maritime-oriented Chinese juggernaut, which has focused on gradually pushing the United States out of its near seas.

Although China is a signatory to the UNCLOS, it has repeatedly sought to impose restrictions on the entry and movement of foreign military vessels and aircrafts well beyond its territorial sea. And in clear contravention of UNCLOS (see Article 60), it has engaged in a sweeping reclamation activity across the Spratly chain of islands, permanently altering the nature of disputed features well beyond its EEZ and continental shelf. In the past two years, China—utilizing state-of-the art technology—has artificially reclaimed 20 times more land than all other claimant countries combined in the last four decades. There is no moral, legal and technological equivalence between China’s reclamation activities and that of other claimant states (i.e., Malaysia, Vietnam, Brunei, the Philippines and Taiwan) in the area.

Against the backdrop of the glaring gap between China’s actions and its legal obligations, the United States (a non-signatory to the UNCLOS) is, quite ironically, invoking UNCLOS as a basis to challenge China’s sovereignty claims in the area. On paper, the United States professes neutrality on the sovereignty claims of competing claimant states in the South China Sea. But its recent decision to conduct freedom of navigations operations, deploying surveillance vessels and possibly even reconnaissance aircrafts, within the twelve-nautical-mile radius of China’s artificially created islands represents a de facto rebuke of China’s territorial claims in the area.

The UNCLOS (Art. 18, Sec. 3, Part II) provides “continuous and expeditious” right for innocent passage for foreign vessels within the territorial sea of a coastal state. But this principle doesn’t apply to activities that are “prejudicial to the peace, good order or security of the coastal State”, including “any act aimed at collecting information to the prejudice of the defense or security of the coastal State.” In short, the UNCLOS doesn’t provide American military vessels the right to engage in surveillance operations within the twelve nautical miles of Chinese-occupied islands. China considers such activities as prejudicial to its interests.

“There is no way for us to condone infringement of China’s territorial sea and airspace by any country under the pretext of maintaining the freedom of navigation and overflight,” the Chinese Foreign Ministry warned in response to America’s decision to conduct freedom of navigation operations within the twelve-nautical-mile radius of Chinese-held features. This means the United States is essentially challenging China’s sovereignty claims to these islands.

China has been engaged in reclamation activities practically across all the features (Fiery Cross, Hughes, Cuarteron, Gaven, Subi, Johnson and Mischief Reefs), under its control in the Spratly chain of islands. None of them are considered by legal experts as naturally formed “islands” (see Art. 121 of UNCLOS), with at least three of them (Gaven, Subi and Mischief reefs) considered as low-tide elevations, which are not entitled to any territorial sea of their own (see Art. 60, Part V and Art. 13, Sect. 2, Part II of UNCLOS). Deploying freedom of navigation operations within the twelve-nautical-mile radius of these features doesn’t violate international law, since they were originally low-tide elevations.

Allies such as the Philippines have warmly welcomed America’s recent decision, with Foreign Secretary Albert F. del Rosario underscoring the necessity to confront China’s “false conclusion that its claims are accepted as a fait accompli.” Strategic partners such as Singapore, however, have expressed reservations, with Defense Minister Ng Eng Hen cautioning, “It does no good for the region if there are incidents.” Washington has the option of deploying littoral combat ships or, to send a clearer message, up the ante by relying on Arleigh Burke–class destroyers to conduct the operation. The duration frequency, and depth of these operations will also determine China’s countermeasures.