Shrimp, SAMs, and the Limits of Russian-Iranian Romance 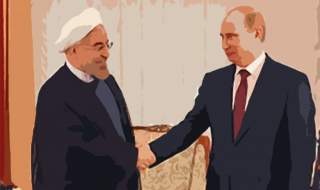 Thanks to the unending American-Russian standoff over Ukraine, there are voices in Tehran that seem to believe that the road to international rehabilitation goes through Moscow.

This week’s high-profile visit to Iran by the Russian Defense Minster is bound to intensify speculations about what the Iranians and the Russians are up to. Still, it is both too premature to assume that – despite the rhetoric – something strategic is in the pipeline as far as Moscow-Tehran relations are concerned, or that there is some kind of agreement inside the Islamic Republic about the prospect of Russia as a strategic ally.

Last week, Iran sent its first consignment of shrimp to Russia. The export of the shrimp is part of a broader political-economic dialogue that Tehran and Moscow have earnestly engaged in since late 2013.

Shortly after he became president, Hassan Rouhani and Vladimir Putin met at the sidelines of the Shanghai Cooperation Organization summit in Bishkek in September 2013. They stressed the need for economic cooperation and within weeks an oil-for-goods swap deal to the tune of $1.5 billion per month was signed. It was said to amount to roughly 500,000 barrels of Iranian oil per day in return for Russian goods and commodities such as grain. By all accounts, this ambitious barter has yet to happen but it is still on the cards.

There is no denying that this trend of closer ties accelerated following Russia’s fallout with the West over Ukraine and the annexation of Crimea. With the ensuing sanctions that the West put on it, Russia was on the lookout to strengthen its economic ties to non-Western states. The likes of China and Iran fit the bill nicely. With talk of President Putin and his Foreign Minister Sergey Lavrov going to Tehran sometime in the near future, perhaps there is more in the way of Iranian-Russian collaboration.

A top Iranian official in Tehran this week predicted an “eye-catching increase in the volume of trade ties between the two countries for 2015.” Iran’s Ambassador to Moscow, Mehdi Sanayee, said in December that Tehran and Moscow planned to boost their trade to $70 billion in the near future. That would be eye-catching indeed. Iranian-Russian bilateral trade in 2013 stood at around $5 billion.

In comparison, China, which is Iran’s biggest trading partner by far, traded for about $36 billion in 2013. It took the Chinese relentless exporting of consumer goods and the European states to walk way from the Iranian market due to the nuclear standoff before Beijing was able to go from $4 billion of trade with Iran in 2003 to $36 billion in 2013. It would take a lot of heavy lifting for Iran-Russia trade volume to jump from last year’s $5 billion to $70 billion in 2015.

In fact, it is not in the realm of trade that we should expect major changes in Iranian-Russian relations in 2015. Despite all the hype, most Iranian analysts will admit that, deep down, officials in Tehran still do not consider Russia a strategic partner but only a friendly neighbor.

No doubt there are good reasons for such a big distinction to be made by the Iranians. From Tehran’s perspective, no issue is holding a potential strategic alliance from happening more than Moscow’s stance on the Iranian nuclear program.

To most Iranian analysts and officials, even though they prefer not to be too public about it, Russian support for international condemnation and sanctions due to Tehran’s nuclear activities has been a deal breaker.

Still, the Iranians are not pushing for a Russian policy turnaround on Iran’s nuclear file. They understand that Moscow’s reservations about Iran’s nuclear activities are as much a product of Russia’s own anxieties than it is part of a Russian-Western compromise.

Instead, the Iranians are looking for more achievable cooperation from the Russians. And cooperation in the realm of defense and pursuing joint geopolitical aims seems to be where the focus is on at the moment.

This week, Russia’s Defense Minister was in Tehran. Iranian media reported that during the talks an agreement was reached to find a solution to the controversy around the sale of the strategic S-300 anti-air system, which Moscow sold to Iran in 2007 but then pulled out of the deal in 2010 citing UN sanctions.  The Iranians never bought that argument and are still very keen to receive the systems. But finding a “solution” is not the same as shipping the system over to the Iranian armed forces. Meanwhile, the Kremlin is evidently still weighing its options in ways to satisfy Iran’s demands in the area.

While in Tehran the Russian Defense Minister Sergey Shoygu and his counterpart Hossein Dehghan signed a memorandum of understanding (MoU) on military cooperation. Most notably, there is mention of joint military drills. This is one specific agreement that would be significant if it ever happened but the details are sketchy. The most likely, and politically uncontroversial, step is to hold joint naval exercises in the Caspian Sea where both countries are littoral states and have deployed naval forces.

Shoygu also hinted at other areas of cooperation. “We highly appreciate steps by the Islamic Republic of Iran in fighting terrorism…and [are] seeking to cooperate in this field,” he said. In the short term, this one area - to fight terrorism – might be where much policy synergy can be anticipated in the months to come. After all, on the geopolitical scene, Moscow and Tehran do share a fair amount of agreement in terms of the biggest terrorist threats.

For both Moscow and Tehran, the biggest terrorist threat is presently in Syria. Russia and Iran have over the course of the Syrian civil war since 2011 loyally backed the Bashar Al Assad regime against the multifaceted Syrian opposition. Both countries claim to prioritize the fight against extremist jihadists in Syria, and this is likely to be the platform that will bring them closer together in the cooperating against terrorism as Shoygu urged when he was in Tehran.

A look at the number of high-profile visits by Iranian and Russian officials to each others capitals in recent weeks suggests that deliberations on a plan for the future of Syria is very much at the heart of this reinvigorated Russian-Iranian dialogue. Whether it will amount to a game changer in shaping the Syrian civil war is debatable.

What is certain, however, is that there are enough common interests on the international stage that will continue to pull Iran and Russia together. Be it in the realm of bilateral trade as an act to circumvent Western sanctions or pushing for the same political outcome in Syria, there is no doubt that this is a relationship in the upswing.