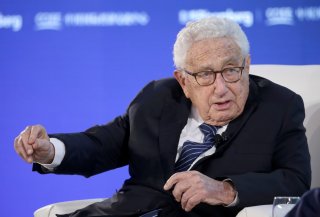 SINGAPORE – At the tip of a peninsula, hemmed in by populous neighbors, Singapore has always lived in insecurity. On a map, the nation is a tiny, vulnerable outpost.

The fact that Singapore survived and thrived is less a miracle of free market economics than a triumph of selfish geopolitics as Henry Kissinger’s latest book, Leadership: Six Studies in World Strategy, makes eloquently clear. The island nation experienced explosive economic growth in the face of geopolitical insecurity—a feat that is increasingly relevant today as great power competition intrudes on the functioning of the global economy.

Kissinger’s nineteenth book profiles six leaders across six chapters and includes stories from the ninety-nine-year-old former secretary of state’s encounters with each of them. His chapter on Lee Kuan Yew, the Singaporean statesman who died in 2015, is the book’s most engaging and provocative effort. Historian Margaret MacMillan in the Financial Times and Adm. James Stavridis in the Wall Street Journal both praise Kissinger’s lively portrayal of Lee, the father of independent Singapore.

Kissinger’s profile of the Singaporean leader, which is peppered with anecdotes about Lee’s brash realism and defiant patriotism, offers an unconventional explanation for Singapore’s miracle economic growth, which critiques the more traditional free market story.

Many economists highlight how Lee’s government exploited advantageous geography to prosper from global trade. Harvard Business School professor Michael Porter, who has advised Singaporean economic leaders, is the most notable proponent of this version of the story. This version tends to emphasize how Singapore’s location as a trading hub—on the route from the Mediterranean, through the Suez Canal, along the Strait of Malacca, to East Asia—allowed the island to accrue all the benefits of an “entrepot” economy. Singapore developed “shipping, communications, banking, insurance, and infrastructure to support importing and exporting, as well as retailing and other services to provide for the needs of the shippers and service providers,” Porter explained in a Harvard Business School case study.

Lee Kuan Yew rarely discussed his nation’s geography the way Porter does. He always emphasized just how perilous and disadvantageous the island’s geography was. “We were a Chinese island in a Malay Sea,” Lee once mused. “How could we survive in such a hostile environment?” In Leadership, Kissinger adopts Lee’s version of the story, not Porter’s. Singapore was “surrounded by much larger and more powerful states, particularly Malaysia and Indonesia, that envied its deep-water port and strategic location along maritime trading routes,” Kissinger writes. As a small island “in a tumultuous part of the world,” Singapore “depended for its survival on an America” from Chinese predations. Lee’s nation walked a “perpetual tightrope between survival and catastrophe.”

Lee surveyed Singapore’s neighborhood and saw a world of geopolitical rivals and territorial revisionists. Singapore’s insecurity led Lee to ask his nation’s government to do unusual things for a capitalist, free market society.

For instance, the Singaporean state funded an array of government-linked companies. Singapore’s Finance Ministry invested directly in local companies and foreign projects. Temasek, the Singaporean government’s investment arm, was the primary vehicle for completing strategic investments. Its initial $100 million portfolio included stakes in thirty-six companies. With a current portfolio of $380 billion, it has grown into one of the most effective instruments of direct state investment in the world. Through Temasek, Singapore’s government owns controlling stakes in the country’s marquee brands, like Singapore Airlines, Singapore Telecom, and PSA Singapore, which operates the world’s largest container port, as well as 90 percent of the island’s land, which is owned through government vehicles like real estate giant TJ Holdings. Importantly, Temasek’s leadership steered investment towards strategic industry “clusters” like petrochemicals and biopharmaceuticals, which enabled Singapore to accrue geopolitical influence alongside economic returns. In the memorable words of one observer, Singapore “has been a major exception to the central tenet of Economics 101 that government participation is bad for the economy.”

In Kissinger’s eyes, one of Lee’s greatest economic accomplishments was “closely linking individual economic prosperity to the state’s well-being.” Lee did this by establishing “parapolitical institutions,” a term used to refer to Singapore’s town councils and community centers, renowned for their responsiveness to citizens’ everyday economic well-being. Temasek, the Singaporean public-private investment vehicle, could be considered another of these “parapolitical institutions.” Lee’s keen geopolitical sense meant that “he understood that the global balance of power was a product not only of anonymous forces but of living political entities,” which needed support and nurturing.

Lee knew a world of bitter geopolitical clashes and high-stakes rivalries, in which defeat meant that Singapore’s neighbors, including China, would dictate the terms of the island’s prosperity. Because of this observation, Lee put Singapore’s economy on the equivalent of wartime footing. He supercharged investment in strategic clusters. He directed the state to play a critical role in economic activity since only it could be trusted to compete effectively with its neighbors. We are living in Lee Kuan Yew’s world.