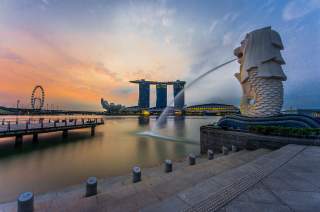 Today’s traveler arriving in Singapore by air sees first a great aggregation of ships laid out in the harbor below, vividly illustrating the city’s primary position among world seaports. In the soft freshness of tropical dawn, driving downtown along a parkway lined with flowering greenery, the many towers of the city gleam in their newness, reminding one how stunningly recent has been the global economic shift from Atlantic primacy to the Pacific as world center of explosive economic growth. In its wildly implausible story of survival, growth, and prosperity, Singapore exemplifies this great transformation and illustrates the power of the maritime world in making it happen.

Singapore is a survival tale of overcoming periodic, even life-threatening crises. Highly competent and ambitious leadership, fired by nervous anxiety and committed to success, has provided the program and pulse for what Singapore is today: an economic dynamo, a miracle of well-crafted institutional design achieved with remarkable speed. But its success was never a given.

Although most Americans scarcely know where it is, we have substantial interests in Singapore, both monetary and military. We have twice as much money invested in that tiny place than in all of China. With these heavy corporate stakes, Americans not only have a big economic interest but also, having long ago replaced Britain as guardian of the global seas, we have a strong strategic interest in ensuring open passage through the Straits.

Although no utopia, the achievements of contemporary Singapore are inspiring. We can admire the courage with which it has faced and overcome adversity. Many criticize its authoritarianism yet accept the substantive accomplishments of its leaders in advancing human welfare, opening society to new opportunities and ideas while sheltering it from those perceived as threatening social harmony. But, as in that ancient city-state Athens, the government believes that the good of the community must supersede the interests of the individual. And many outsiders would now agree.

In its earliest years, seven centuries ago, Singapore faced threats to its survival from hostile neighbors and lost its importance as a significant seaport. When the British arrived in 1819, they first faced an environmental challenge, to hack out a tentative settlement at the lip of a stubborn and aggressive jungle, in a tropical environment that many of its settlers found both alien and hostile. Immediately the threat of stillbirth loomed.

London, for European geopolitical reasons, threatened to repudiate the founders, only belatedly giving approval to its new rapidly growing outpost of empire. A generation later when the British defeated China in the Opium War (1839–42) part of the booty was the barren island of Hong Kong, which rapidly became a major British port. Singapore, hitherto touted as the “gateway to China,” lost that role and feared it would then forfeit the China trade, the principal justification for its founding and its first great hope for prosperity.

At the turn of the nineteenth century, fluctuations of global commodity exchanges, notably the elastic demand for rubber, a principal re-export, illustrated Singapore’s heavy dependence upon a world market beyond its control. And the trauma of destruction and brutal Japanese occupation in World War II again painfully showed Singapore its continuing vulnerability to forces from the outside world.

When independence abruptly and unexpectedly came, after a tumultuous and brief (1963–65) union with Malaysia, many thought the new nation could not survive. Unemployment soared. Disorder reigned. Strikes disrupted production. Rioters thronged the streets. Communism appealed to many, and Singapore faced a big aggressive neighbor in Indonesia.

With many to feed and few resources to do so, a fragile new political entity was challenged to create a stable economy and a sense of nationhood for a city diverse in race, religion, and language. Founding prime minister Lee Kuan Yew even called the idea of a modern maritime city-state a joke and national identity continues to challenge Singapore.

But ambitious for himself and for his country, Lee skillfully used the psychological impetus of freedom to animate the populace while gradually establishing political control, in part by using the mechanisms of authoritarian British colonial rule. Yet while economic growth began to generate jobs and diminish social tensions, by withdrawing its military presence in 1971, Britain struck a huge blow to Singapore’s national security and the economy. Its bases had generated nearly one-fifth of GNP and employed one of ten Singaporean workers.

Today Singapore is the world’s most trade-dependent nation, indicating its vulnerability to global economic forces beyond its control. A survivalist mentality, artfully orchestrated by the government, continues to drive educational achievement, military preparedness, attachment to thrift, search for a competitive economic niche, and the desire for a greater place in the global community.

Ambition and anxiety are the two words that best capture the effort. Singapore’s leaders have consistently exploited anxiety to exhort the people to embrace rather than to reject the changes the leadership has sought and the tactics it employs. As former prime minister Goh Chok Tong says, Singapore has “no certainty of future success and must stay united as a people, relevant and competitive while navigating a choppy sea.”

In 2015 Singapore in one estimate ranked as sixth among cities in “economic power,” exceeded only by New York, London, Tokyo, Hong Kong, and Paris. In the ease of doing business overall, the World Bank rates the city-state as globally number one, as does the Economist. Singapore’s per capita GNP grew from $500 to $15,000 in thirty years. In 2014, in current US dollars that number was $55,150, a figure nearly a third more than that of the former mother country, Britain. And thanks to government tax credits for companies hiring low-wage workers, the number of workers looking for jobs is under 2 percent.

Singaporeans can even boast the world’s highest average IQs. A recent study correlates intelligence with health. Countries unburdened by infectious diseases are found to have higher rates of intelligence than those who are ailing. Singapore, with relatively low disease rates, tops the global correlation list with the highest rate of intelligence based on comparative IQ scores.

Some American primary school teachers, aware that their students do not reach the best international standards, are giving attention to “Singapore math,” an approach to numbers and quantitative concepts that has helped put Singaporean students at or near the global top in that subject. And in science, among the world’s advanced economies, only Finnish students score better than Singaporeans.

Education for performance has proven the ultimate key to achieving and sustaining a brilliant economic record. Singapore pays careful attention to basic literacy and numeracy. The desire to learn usually springs from the family and Chinese Singaporeans especially manifest this. Although committed to the English language, Singaporeans speak a second or even third tongue as well, an asset that Americans would find useful in an increasingly globalizing world.

Singapore has propelled itself to distinction in the contemporary world and the world is taking increasing notice. Even more than a generation ago, the Financial Times was calling Singapore a “Zurich of the East,” influential far beyond its size. Many admire and some seek to emulate Singapore, viewing it as a model. Dubai observes its business practices; sometime president of Georgia, Mikhail Saakashvili, touted an image of his country as “Switzerland with elements of Singapore.” Panama, like Singapore a strategic maritime connector, likes to see itself as the future “Singapore of Central America.” When China’s notorious Bo Xilai was mayor of the northern seaport Dalian, with Singapore in mind, he said, he planted trees, fought pollution, and “rewarded people who reported rude taxi drivers.” Beguiled less by its glittering infrastructure, accrued wealth, or test scores than by its politics of soft authoritarianism, China studies Singapore. Even in the United States, an American real estate developer says he would like the shoreline of Flushing, New York, “to look like Singapore.”

Timing is clearly one reason for the triumph. Contemporary Singapore had the good fortune to emerge during the past fifty years at the time of a great leap in world wealth, global economic integration, the breakdown of old oceanic empires with the release of the “animal energies” of many newly freed peoples, and technological advances specifically in the maritime world.

As well as being at the right time, being in the right place is another reason for success. It all begins with geography. Singapore’s total area, only 241 square miles, is a mere fraction of Rhode Island. Traffic allowing, you can drive from one end of the country to another in less than an hour. The population now pushes over five million, a substantial number for a city but not for an entire country.

Singapore’s small territorial size limits both its home market and its supply of human capital and fuels a sense of vulnerability. But smallness can also be advantageous. No large, backward, rural sector has handicapped a highly urbanized nation in its march to modernity. Smallness allows short and dense lines of communication that can strengthen a community by smoothing organization and promoting consensus, a greater ease and efficiency in organizing people and what they do. Deng Xiaoping once said wistfully to Singapore’s Lee Kuan Yew, “If I had only Shanghai to worry about. . . . But I have the whole of China!”