The Sinister Side of Ukraine’s Telegenic Young President 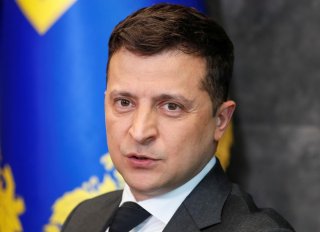 As Ukrainian president Volodymyr Zelenskyy takes Washington by storm and makes the case for a renewed U.S.-Ukrainian partnership, there’s something sinister in Kyiv, deserving of attention, that hasn’t made it into the Washington Post. The powerful head of Zelenskyy’s presidential office Andriy Yermak has used the Security Services of Ukraine—the rough equivalent of the FBI—to censor media that criticize him.

I know this because Yermak has attacked our magazine personally. I’m one of the five leaders of Democratychna Sokyra, a classical liberal party and movement. In a country ruled by oligarchs and corrupt officials, we wanted to vote for a liberal political power, so we created one in 2018. Now we’re a small grassroots project but big enough to become a target of political censorship.

We were never afraid to criticize the most influential and notorious Ukrainian tycoons, including Ihor Kolomoyskiy, Dmitry Firtash, and Rinat Akhmetov. We provided many investigations into their nefarious activities, the dark deeds of the head of Ukrainian central bank Kyrill Shevchenko, and the Russian connections of Ukrainian Member of Parliament Andriy Derkach, who tried to influence the U.S. elections by collecting dirt on then-Presidential candidate Joseph Biden.

In Ukraine, it’s not hard to begin an investigation, but it’s hard for a story to gain traction. The most powerful oligarchs control the most influential media. So we resorted to social media—Facebook is the most effective—and to old-school methods like the printing press.

This year, we started to print our monthly newspaper Pravdorub (Truth Teller or Straight Shooter). It’s our main media outlet with a monthly circulation from 100,000 to 1,000,000 copies—and that’s big for Ukraine. That was our only way to reach a mass audience. It was critical not only of the oligarchs like Firtash and Kolomoisky but also of the politics of the current Ukrainian presidential office. That office struck back.

According to the laws of Ukraine, the head of the Presidential Office is no more than a secretary. His work is to control the office protocol and paperwork. That’s not a political position, and it is even not mentioned in our Constitution. This was the case during previous Ukrainian presidents, but President Zelenskyy changed things. He made Andriy Yermak, his personal friend, not only the head of his office but also his de-facto vice president, if not bigger. For example, Yermak accompanies Zelenskyy on most of his foreign visits and conducts talks with foreign politicians. He was the one who discussed the possibility that Ukraine would help in the investigation of the Burisma case with Rudy Giuliani. He also has the final word in every significant appointment in the Ukrainian executive power branch.  He is the power behind the throne.

Our newspaper criticized him for his overreach, and then some. We have reasons to believe that Yermak is much more pro-Russian than the person in such a position could afford to be during the undeclared Russian-Ukrainian war conflict that continues to grind on in year seven. He was the architect of de-escalation initiatives that became one-sided and led to the worsening of Ukrainian positions in the Donbas. Our sources confirm he was the one who sabotaged the planned operation of Ukrainian intelligence aimed to arrest the fighters of the Wagner group, a Kremlin hybrid warfare private military company.

One month ago, the printing house we had used refused to publish the fifth issue of our newspaper, which included the articles about the Wagner affair and corruption in the National Bank of Ukraine. Unofficially they told us that they received threats from the Security Service of Ukraine (SBU). They faced a stark choice: they stop working with us or SBU would paralyze their business. They rationally chose the first option.

This situation is not something we ever expected. But it got even worse: every printing press we tried to contact refused with the same explanation or without any, and we tried almost two dozen. Some of them were approached by the SBU the same day after our call. This is highly unusual even for Ukraine. Even under former Presidents Leonid Kuchma and Viktor Yanukovich, who were considered autocratic and whose actions precipitated massive street uprisings, pressure from the SBU on small non-parliamentary parties was unusual. Several of the printing house owners told us this.

For the past two years, the Security Service of Ukraine has used its influence to counter media outlets spreading Russian propaganda and fake news. That’s not the case with us. We’re a pro-Western classical liberal movement. Given that the current SBU head Ivan Bakanov is a childhood friend and lifetime colleague of Zelenskyy and Yermak, we can only assume that the SBU pressure we have faced results from our critique of Yermak.

We all went through multiple violent and hopeful street protests, we all raised our voices against wannabe dictators, and we know that after such surprises more severe and sinister things always come from the Security Services.

We’re telling this story before they take away our ability to say it to our fellow Ukrainians. We will find a way to print our newspaper, but we don’t want these practices in Ukraine, and reminding Washington that there’s far more to Zelenskyy than his telegenic personality and youthful energy might help change our situation.

As Washington fetes Ukraine’s young president, bear in mind that press freedom in Kyiv is under threat. And the president’s most trusted advisor is the culprit.

Anton Shvets is one of five leaders of Democratychna Sokyra, a classical liberal party and movement.