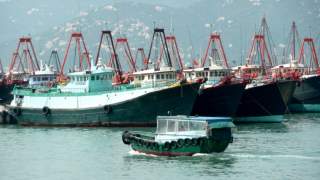 Since 2008, countries bordering the East and South China Seas have observed an increasingly assertive presence of Chinese maritime enforcement, coast guard and naval vessels among disputed claims in these seas. During this same period, Chinese officials have been more outspoken about China’s maritime territorial claims, which has led to increased tensions in the region. Recent incidents involving disputed claims and Chinese paramilitary and military forces have occurred near Scarborough Shoal, with Chinese oil-drilling rigs inside Vietnam’s Exclusive Economic Zone (EEZ), around the Senkaku Islands, at Second Thomas Shoal in the Spratly Islands and with U.S. naval vessels and aircraft.

This Chinese “salami-slicing”—small, incremental actions too minor to be a casus belli, but which can accumulate over time into substantial strategic change—now presents a vexing challenge to China’s smaller neighbors. They lack the capacity to match China’s increasing presence, which, if not opposed, could eventually create “facts on the ground” supporting China’s maritime claims. The United States, which still retains a strong interest in defending the principles of an open commons in the East and South China Seas, is presently hard-pressed to justify drawing red lines and risking a confrontation over what many consider to be uninhabited and insignificant rocks. The United States and its friends in the region thus seem flummoxed over how to respond.

Fortunately, there are practical actions China’s smaller neighbors around the East and South China Seas can take to resist China’s salami-slicing. These actions focus on building maritime capacity, especially on the nonmilitary end of the spectrum. They also focus on increasing cooperation and coordination among these neighbors in order to make the best use of limited assets and to enhance the political, legal and moral legitimacy of resisting China’s assertions. The United States will have to become a major supporting player if these initiatives in the region are to succeed; the United States is trusted by most of these countries and is thus well placed to provide the diplomatic and leadership “glue” needed to ensure effective cooperation.

Here are six ways countries in the region, supported by the United States, can resist China’s salami-slicing.

1. Expand the presence of non-Chinese fishing fleets in the East and South China Seas:

National government policies should encourage and support civilian fishing operations as a national-security priority. The purpose of this initiative is to match China’s civilian presence in these seas and to avoid the appearance of ceding the waters to China. An expanded fishing presence also then justifies an expanded enforcement and coast guard (or “white hull”) presence.

All countries (including China) should cooperate on ensuring that the region’s fishing stocks are not overexploited. But it is still critical that China’s smaller neighbors take coordinated action to match China’s civilian presence. Other substantial powers in the region that have an interest in maintaining an open maritime commons (for example, the United States, Japan, India and Australia) may see strategic benefits to providing financial assistance that would support this initiative.

China’s neighbors may achieve more and faster capacity improvements by increasing funding for “white hull,” nonmilitary maritime capacity compared to allocating that funding to naval warships. Over the medium term, China’s relative naval power compared to its neighbors will inevitably widen. China’s neighbors are almost certainly not in a position to compete successfully against China in “gray hull” naval power.

However, the competitive circumstances in the civilian and “white hull” spectrum may be more favorable. The international community is more likely to view China’s small neighbors sympathetically during maritime incidents involving fishing boats, law-enforcement vessels and coast-guard cutters. Media operations and global public opinion are very likely enduring competitive advantages for China’s neighbors, especially when encounters do not involve warships. Thus, investments in “white hull” capacity should be favored since these will provide the smaller countries with the means to compete against China on more favorable terms.

3. The United States maritime services (civilian and military) and their counterparts in allied and partner countries in the region should expand information sharing, officer exchanges and multilateral training activities:

The exchange of local knowledge, operational experience, best practices and technical expertise are relatively low-cost ways of increasing maritime capacity that will yield large benefits to all participants. Countries in this partnership network should expand regular programs for officer exchanges, staff meetings, school class appointments and training exercises in order to achieve the benefits of information sharing.

4. The United States, along with allied and partner countries, should establish a formal system for sharing basic, real-time maritime intelligence:

This would allow the partner countries in the network to establish a “common maritime picture” that would facilitate multilateral responses during incidents and allow for the efficient allocation of resources during such responses. Maritime headquarters staff and intelligence officials from countries in the network should meet to establish such a system and then establish training and staffing procedures to sustain it.

5. Policy makers and planners from the United States and other countries in the regional maritime network should prepare multilateral crisis-response staffing procedures:

The purpose of this initiative is for members of the partner network to prepare in advance for maritime incidents and crises. Preparing in advance for potential crises, whether natural disasters or geopolitical incidents, will allow for smoother and more effective crisis management. It will also discourage potential adversaries from using crises to create leverage.

6. Invite other interested countries in the region to join the initiatives listed above:

Expanding the list of participating countries adds resources to these initiatives, adds new knowledge for participating officials and increases the legal and moral legitimacy of the effort to protect the maritime commons and sovereign rights.

Taking these actions to build maritime capacity will require commitments of money, manpower and government attention—valuable resources that are almost always in short supply. Focusing at first on the nonmilitary and “white hull” side of the maritime capacity spectrum should be relatively noncontroversial, and will be the cheapest and fastest way to build capacity and presence in the region’s disputed waters.

The United States has a strong interest in resisting China’s salami-slicing in the East and South China Seas. Needless to say, it is China’s smaller neighbors that are on the front line of this competition and that will need assistance if they are to confidently match up against China’s assertions. There are effective ways to resist salami-slicing. With a relatively minor investment of time and resources, the United States can help its friends build their maritime capacities with an end goal of deterring conflict and preserving regional stability.

Robert Haddick is an independent contractor at U.S. Special Operations Command. He writes here in a personal capacity. His book “Fire on the Water: China, America, and the Future of the Pacific,” is now out from Naval Institute Press.