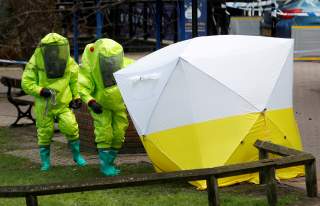 What we see in the affairs of men and nations often depends more on what we believe than on dispassionate evaluation of the facts. Reactions to the latest developments in the Skripal affair—which include new published evidence that strongly suggests Russian officials were behind the attempted poisoning of the ex-Russian spy but sheds little light on their motives—are a case in point.

A few weeks ago, the British government released photographs and video footage of two Russian men who had traveled to the UK from Russia on Friday, March 2. The two shared a room in a modestly priced hotel in London located far from any tourist attractions, then made two visits by train to Salisbury, where the Skripals were located: one trip for a couple hours on Saturday, and another longer trip on Sunday, the day the Skripals are believed to have been poisoned. The men then departed directly for the airport in London, spending a total of about fifty-four hours in the UK. These men were not who they purported to be, according to the British. They were in fact Russian military intelligence officers traveling under alias, who had a history of making numerous unexplained trips to Switzerland as well as to the UK and other countries, and who had poisoned the Skripals with a chemical weapon, Novichok, a small trace of which was identified in the men’s hotel room.

President Putin dismissed the accusation. He called the men “civilians, not criminals” and urged them to come forward. Shortly thereafter, Russian television broadcast an exclusive interview with the two men. They were not, they pleaded, intelligence officers carrying out an assassination. Rather, they were two fitness instructors who had taken a weekend trip to England to see the magnificent sites in and around Salisbury, including its historic cathedral and clock. Bad weather had cut short their first attempt at tourism, so they had to return to Salisbury on Sunday to complete their sightseeing. They had shared a hotel room merely to save money. Like Cary Grant’s character in Hitchcock’s North By Northwest, they were simple private citizens who were in the wrong place at the wrong time and got mistaken for intelligence officers, and they were desperately hoping to return to quiet anonymity outside the spotlight.

The interview elicited a collective guffaw from viewers in the West. The men’s narrative bore all the hallmarks of a cover story, and not a very convincing one at that. A Russian news site reported that the two men carried international passports whose serial numbers were quite nearly consecutive, a most improbable coincidence. Bellingcat, a Western investigative site, reported that Russian archives had no record of either man’s having had an internal Russian passport prior to 2009, something highly unusual for ordinary Russian citizens. Moreover, Bellingcat discovered a photograph from 2003 of a known Russian military intelligence officer, a colonel decorated for valor in unspecified operations, who looked remarkably like a younger version of one of the accused men. It looked all but certain the men were officers in the GRU, the commonly used short-hand for Russian military intelligence. And if they were GRU officers, then the Skripal poisoning was a case of a Russian state-directed assassination attempt. “The GRU is a highly disciplined organization with a well-established chain of command,” said British Prime Minister Theresa May. “So this was not a rogue operation.”

Not so fast, retorted the skeptics. Clearly the men were not mere tourists. But were they Kremlin-directed assassins, were they carrying out a private vendetta against a former colleague who had exposed GRU corruption, or were they engaged in some other variation of no-good? Their operational security was evidently poor for such a sensitive mission, as they had traveled to and around Salisbury in full view of closed-circuit television cameras. For men allegedly transporting a dangerous chemical weapon, a binary poison not activated until its component parts are mixed, their choice of a hotel room that lacked an internal bathroom or sink was odd, impairing their access to water in the event of an accident. Moreover, the timing of their Sunday visit to Salisbury was also inconsistent with the alleged method of administering the poison, which British authorities say was applied to the handle of Skripal’s front door and absorbed through the skin when the Skripals touched the handle. Video surveillance showed that the Skripals had left the house well before the men’s arrival around noon on Sunday, and it did not indicate they had returned to the house prior to falling ill later that afternoon on a park bench in town. Finally, only one of the many tests for Novichok in the men’s hotel room had produced a positive result, and the positive test on that swab could not be replicated in the laboratory. Could anyone really be confident that they had the chemical weapon in their room?

In view of these apparent anomalies, argued the skeptics, was it not also possible that the men were current or former GRU officers hired privately by Russian businessmen to help move and launder money illicitly, outside the glare of government authorities? Such operations would require hand-carrying sensitive signed and sealed documents that authorized money transfers, papers so valuable that protecting them from theft required two men trained in hand-to-hand combat who would remain in each other’s company around the clock. This would explain their travel back and forth to Geneva, home to the famously discreet Swiss banking system, as well as their presence in the UK, where numerous wealthy Russian ex-patriots live and work. Neither the men, their sponsors, nor Putin himself would be eager to come clean about this activity.

The debate over the latest evidence pivots on what one is inclined to believe about how Russia’s political system works and what Moscow aims to do in the world. For those who see the Russian government as a tightly disciplined organization, closely controlled by Putin, intent on eliminating its internal opponents and intimidating and undermining the West, the Skripal case is all but closed. The presence of GRU officers in Salisbury on the day of the poisoning is by itself sufficient to prove the Kremlin’s guilt. Putin’s risible denials—and his denunciation of Skripal—only reinforce the conclusion that he ordered the hit.

For those who see the Russian government as a gang who cannot shoot straight, mixing official activities with illicit business on the side, while keen on maintaining the fiction that Putin presides over a well-oiled machine, the situation looks a lot murkier. Personal revenge or private corruption could have driven the men’s actions. Shoddy operational security and ultimate mission failure are signs the GRU is not quite the “highly disciplined organization” that Theresa May asserts it is. And it would make little sense for Putin to have targeted the Skripals on the eve of hosting the World Cup, where he mounted an enormous public relations effort to polish Russia’s international image.

Ultimately, however, these distinctions have become academic. In choosing to throw shade rather than light on what occurred, Putin has made clear he bears responsibility for the attack whether he ordered it or not.