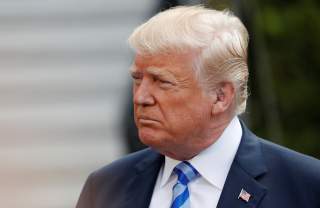 Following the 1828 election of Andrew Jackson, New York Senator William L. Marcy famously remarked, “To the victor belong the spoils.” Today, many of the spoils of President Donald Trump’s November 2016 victory remain unclaimed. A large number of political appointees are either stalled in Congress, have not been nominated, or remain filled by Obama administration holdovers. This means that we have champions of “Hope and Change” charged with implementing “Make America Great Again.” Amid the myriad attempts to unseat a duly elected president, this issue won’t receive much media coverage. But winning this particular battle will help the White House to rack up important policy victories across the government and keep the promises of the 2016 campaign.

The vast majority of federal government jobs are ostensibly non-political, career roles, which means that the employees serve regardless of who is elected president. Per the Pendleton Federal Civil Service Act of 1883, these jobs are filled on the basis of merit and not political affiliation. But there are thousands of political roles that the presidential administration does have the prerogative to fill. Every four years, the federal government publishes the Plum Book which contains data on nearly 9,000 federal positions in the legislative and executive branches that the incoming administration can influence. These include everything from senior executive positions like the Secretary of Defense to advisors, policy aides, and support staff. According to the 2016 Plum Book, there are 1,242 presidential appointments requiring Senate confirmation with another 472 presidentially appointed roles not requiring confirmation and 1,538 “Schedule C” appointees.

As of April 27, 2018, only 315 of the 1,242 presidential appointments requiring Senate approval have been confirmed, according to the Partnership for Public Service. Currently, 129 have been formally nominated and are awaiting confirmation. Of the last five presidents at the same time in their presidencies, President Trump’s appointees have been subject to the longest average time to confirmation at 84 days—nearly twenty days longer than the next closest, Barack Obama, who averaged sixty-six days. If President Trump is to maximize the value of his time in office, he needs as many staffers in the government who share his policy views as possible. Failing to do so is simply a missed opportunity.

In the private sector, organizational efficiency is paramount because profit is the driver of the enterprise. Leaner and more efficient organizations are able to maximize profits while bloated organizations perform weakly against their competitors. Government is different, though. The end-game is policy, not profit. And the U.S. government is a massive, entrenched bureaucracy. The best way for a president to achieve his/her executive branch objectives is to staff it with as many talented, like-minded people as possible. In doing so, the president gives himself a fighting chance to set the vision and let his political staffers wrestle the Leviathan to implement that vision.

The appointment and confirmation of cabinet-level and other senior officials by the U.S. Senate is critical. However, the efficacy of those senior political appointments is ultimately limited if they lead an executive department or agency filled with career government employees without the support of other political appointees in management and front-line positions. This matters because, as in any large organization, the senior executives outline the vision for the organization and the senior managers and front-line employees are tasked with executing that vision.

The aggressiveness with which they’ll implement and drive that vision is fundamentally different. The reality is that some career employees won’t implement; they’ll slow, stymie, and stonewall whenever possible. A career government employee who generally votes for Democrats and voted for Hillary Clinton will not passionately embrace President Trump’s vision. One of the president’s greatest instruments to enact change to the federal government is within the bureaucracy itself through the many political appointees each presidential administration is able to fill.

One analysis by The Hill, just before the 2016 election, found that federal employees gave nearly $2 million to the presidential candidates, with Hillary Clinton receiving 95 percent of that money. A poll of federal employees before the election found that 53 percent supported Clinton to just 34 percent for Trump. If you need another indicator of how federal employees lean with their votes, just look at solidly blue Washington D.C, Maryland, and Northern Virginia where many work and live. Remember: the now-infamous FBI employees Peter Strzok and Lisa Page were “impartial” federal employees—not Obama administration appointees (you can see their greatest hits here). This is not to say that all federal employees are blinded by a hatred for the president; but it would be unrealistic to believe this doesn’t have a tremendous impact on the execution of government.

The White House should make political staffing a top priority and implement a clear action plan to reverse this problem. First, it should be putting pressure on Senate Majority Leader Mitch McConnell to get the backlog of nominated appointees an up-or-down vote in the Senate within 120 days; the White House should have an active presence on the Hill driving this aggressively. Second, the administration should be instructing all cabinet-level and other Senate-confirmed employees currently serving to identify all unfilled political roles along with a plan to have them filled within ninety days. And third, the White House should be developing a detailed plan to ensure that all 1,242 presidential appointments requiring Senate confirmation have nominees submitted within sixty days and that all 472 presidential appointments not requiring Senate confirmation are filled within 120 days.

Thomas M. Skypek is a former national security consultant. He was a Washington Fellow at the National Review Institute and a Nuclear Scholar at the Center for Strategic and International Studies. The views expressed herein are his own.

Image: U.S. President Donald Trump speaks to the news media before boarding Marine One to depart for travel to Texas from the South Lawn of the White House in Washington, U.S., May 4, 2018. REUTERS/Leah Millis