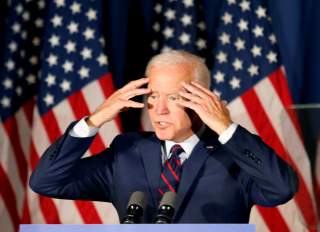 Former Vice President Joe Biden traveled to New Hampshire today to give the first of two planned speeches. The speech is one of the few addresses the seventy-six-year-old candidate has given since the start of the impeachment inquiry into President Donald Trump. While described as a public town hall by the Biden campaign, the actual event resembled a rally, and the candidate took no questions from the press or audience.

During his speech, Biden described the founding of the United States and how worried the founding fathers were about foreign influence by European powers.

“At the time, one of the biggest concerns was that foreign nations would interfere in our democracy, in our experiment. That’s why we have an emoluments clause, to prevent presidents from being secretly bribed or paid off by foreign governments. In his farewell address, George Washington specifically warned against foreign nations meddling in our affairs,” said Biden, before quoting part of the address.

“Over two hundred plus years has followed, and we have been vigilant to keep foreign nations out of our elections. That was until President Donald Trump,” claimed Biden. There have been accusations of foreign government involvement on behalf of U.S. presidential campaigns in the past, including the United Kingdom in 1940, South Vietnam in 1968, and Iran in 1980.

“Last week, on the White House lawn, President Trump invited China to get engaged in deciding our election and who our nominee would be,” specified Biden.

As described, speaking impromptu to reporters, Trump said, “And by the way, likewise, China should start an investigation into the Bidens. Because what happened in China is just about as bad as what happened with Ukraine.” He was referring to business dealings involving Hunter Biden which took place shortly after Hunter traveled with his father to China on an official visit in 2013.

“It was the third foreign power (that we know of) that he’s asked in clear, unmistakable language to interfere on behalf of the democratic proceedings in the United States of America,” continued Biden. He was referring to Trump’s comment on China, his phone call with Ukrainian president Volodymyr Zelensky in July, and Trump’s comment from the 2016 campaign that if Russia or any other government possessed the thirty-three thousand emails Hillary Clinton deleted from her State Department server, they should release them.

“It directly threatens our democracy. This is not hyperbole, it’s a fact. No president in American history has ever dared to engage in such unimaginable behavior,” said Biden. “With his words and his actions, President Trump has indicted himself, by obstructing justice, refusing to comply with the congressional inquiry, he’s already convicted himself. In full view of the world and the American people, Donald Trump has violated his oath of office, betrayed his nation, and committed impeachable acts.”

This is the most forthright statement given by the Democratic frontrunner. Up until late September, Biden had sidestepped questions of whether Trump should be impeached. This changed after the news of the initial whistleblower complaint over the Ukraine phone call leaked, when Biden then said impeachment was necessary if Trump did not comply with congressional demands for transparency.

Biden then addressed the accusations emanating from the administration that he and his son, Hunter Biden, were involved in personal corruption in Ukraine. Two months after Biden helped facilitate a coup against the elected Ukrainian government in February 2014, Hunter was hired at a natural-gas company owned by an influential Ukrainian oligarch. Despite not having previous experience in energy development, Hunter was paid six hundred thousand dollars a year.

“Folks, he’s targeted my family with lies, and distortions, and smears. And that’s all they are. Because he thinks he will undermine my candidacy for the nomination as well as the presidency if I’m the nominee. He’s just flat doing what he’s always done: lying,” Biden said.

“And that’s what they are, they’re lies. There is no truth in his charges, his attacks against me and my son, zero. Every independent news organization that has reviewed his charges at length found them to be flat out lies. And Trump knows it. But the old method he has used very well since he was a businessman, repeat, repeat, repeat the lie.”

It was at this point that Donald Trump, responding to the speech, live tweeted, “So pathetic to see Sleepy Joe Biden, who with his son, Hunter, and to the detriment of the American Taxpayer, has ripped off at least two countries for millions of dollars, calling for my impeachment – and I did nothing wrong. Joe’s Failing Campaign gave him no other choice!”

The former vice president then turned the tables on the White House and accused the administration of facilitating its own corrupt practices in Ukraine. “And now there’s a report that not only did Trump send Rudy Giuliani, a man of great integrity [sustained audience laughs], his personal lawyer, to carry out his scheme and co-opt the State Department, it’s been alleged that the allies of Giuliani were working on a side deal at the same to make millions in Ukraine,” he said. “Just alleged. I don’t know for a fact. A corrupt scheme, with an additional heaping of corruption with self-dealing on the side. Classic Trump.”

Furthermore, Biden addressed Trump’s personal tax returns, which he refused to release during the 2016 campaign and after his election. “And by the way, even Nixon released his taxes,” Biden said to laughs from the audience. “Where are his taxes? What’s he hiding? What’s he afraid of? What’s buried in those returns? Why can’t the American people see them, why can’t he release them?” The IRS, which possesses the tax returns, have made no attempt to allege improprieties in their contents.

Biden believes that Trump is singling him out because he’s the most competitive Democrat in next year’s election. “Look folks, Trump did it because like every bully I’ve ever known or every bully we’ve read about in history, he’s a coward. He’s afraid. He’s afraid of just how badly I will beat him next November.”