Smackdown: The Houthis Will Crush Saudi Arabia in Yemen 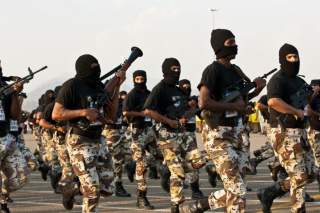 For the better part of its independent history Yemen has been plagued by conflict and turmoil.  Since the September 11 Attacks, al-Qaeda’s robust presence there has alarmed Washington policymakers. Today, however, a more conventional conflict threatens its stability and that of the larger Middle East. It has become the epicenter of the Iranian-Saudi Arabian proxy war that has gripped the region. The Yemeni theater is one that the Saudis cannot afford to lose.  But unless the Saudis conjure up a heretofore absent genie, the Iranian juggernaut will likely prevail.

The Saudis are backing embattled President Abd Rabbuh Mansur Hadi. In January, a rebel group known as the Houthis overthrew him. Drawing on their common Shia roots, the Iranians have come to their aid, setting up the latest Iranian-Saudi showdown.

From Lebanon to Syria via the Palestinians, Iranians proxies have defeated groups backed by the Saudis. The preferred Saudi strategy of showering surrogates with cash has been no match for the Iranians, who prize combat prowess. Iranian proxies are seasoned in guerrilla warfare. Groups such as Hizballah, which have fought Israel to a standstill, have much to offer the Houthis.

What will likely determine the outcome of this battle is the Iranian dedication to the cause. They are latecomers to Yemen—they only started aiding the Houthis in recent years—and do not have the same strategic interests there as the Saudis. Syria is a much more important asset in the Iranian constellation, because it provides a land-based lifeline to Hizballah, and it prevents the regional isolation that the mullahs dread most. Because Syria is taxing Iran’s capabilities, Tehran might not believe that squandering resources in Yemen is wise.

Yet, in past conflicts with the Houthis, the Saudis fared poorly. In 2009-2010, the Saudis launched an air campaign against them that resulted in more than a hundred casualties and dozens of prisoners of war. This time, to shore up their military shortcomings, the Saudis assembled a ten-nation coalition, with Egypt as its head. Egyptian President Abdel Fattah al-Sisi has pledged to send ground troops to aid the Saudi air campaign. Though Egypt has the most powerful Arab military force, that is a low bar in a region where an Arab-led army has not defeated a non-Arab army since the 9th century.

The last campaign fought by Egyptian forces in Yemen ended disastrously. Supporting the republicans in a civil war against the royalists they had overthrown, the Egyptians suffered 26,000 casualties from 1962 to 1970. At its peak, there were between 60,000-85,000 Egyptian troops in Yemen. The Egyptian military, trained to fight the Israelis in open deserts, not tribesmen in mountainous highlands, was ill-prepared for the Yemeni theater. They could not control large parts of the country. Describing the Egyptian ineptitude during a May 1967 visit, Le Monde correspondent Eric Rouleau wrote, “ambushes, harassments, surprise attacks by irregulars, the tribal guerrillas, get the better of a modern army manifestly incapable of confronting the ‘elusive phantoms.’” As a result, the Egyptians frequently resorted to poison gas. In explaining why Egypt was defeated by a ragtag insurgency armed with recoilless rifles, Ken Pollack wrote that “Egypt’s generals apparently never figured out how to defeat a guerilla force.”

(Recommended: How Iran Would Go to War against America)

Since then, the Egyptians have not gotten much better at fighting insurgencies. They have been unable to quell a Sinai insurrection, whose cadres are much less experienced than the Houthis who fought six wars against the Yemeni government from 2004-2010. Slow moving Egyptian armor will likely be no match for the nimble Houthis’ ample experience with hit and run tactics against the Yemeni military.

To ensure that the Egyptians will not bear the brunt of the burden, President Sisi has called for a 40,000-man army to be drawn from various Arab states. But past attempts to create such a force have never come to fruition. An ambitious plan spearheaded by Egypt and Syria floundered in its attempt to create an Arab force to protect the Persian Gulf principalities in the aftermath of the Iraqi invasion of Kuwait. It was left to the United States to be the sheriff of the Persian Gulf. And when the Arabs have deployed peacekeeping forces in places like Lebanon, they have been little more than spectators to ongoing fighting.

The Saudis claim their goal is to restore the legitimate government to power. But their dilemma is that this fictitious government exists only in the minds of the international community. When the Houthis overthrew President Hadi, his government withered away.   Real power lies with former President Ali Abdullah Saleh, who was forced to step down in 2012. He controls the military that sat on the sidelines as the Houthis defeated his enemies.

Though some units such as Brigade 111 have declared for President Hadi, most remain loyal to Saleh. But it is not only the military that will likely decide this contest. The tribes will play an important role. Tribal alliances proved crucial to the successful Houthi march from the northern province of Saada to the capital of Sana’a. In the province of Amran, they cut a deal with the Banu Suraym tribe. Before entering Sana’a, they allied with the clans surrounding the city such as Bani Matar and Khawlan.

The Saudi quandary is that their chief tribal allies have gone into hibernation. The Ahmar family, the most influential clan in Yemen, was soundly defeated by the Houthis last year.  The Saudis, who have long kept a number of Yemen’s tribes on their payroll, are hoping their cash will save them. But like the Egyptians in the 1960s, they may learn that purchased loyalty is fleeting. During the civil war, the Egyptians complained that tribesmen were republican by day, only to change into royalist clothes at night.

The Saudi coalition has had some early success. Airstrikes have halted the Houthi advance against the southern port city of Aden, where Hadi sought refuge. But it is doubtful that the Saudis can dislodge the Houthis from Sana’a and its environs, where their brand of Shiism preponderates. And if the Saudi coalition gets bogged down in a country that turned into an Egyptian graveyard, the Iranians will rejoice at their latest conquest over their rivals.