Smile Versus Glare Diplomacy at the Olympics 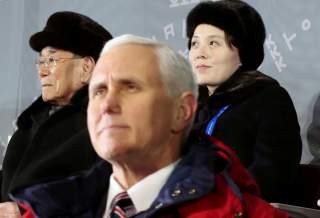 Much criticism has been leveled against Vice President Mike Pence from some quarters because he remained cold-faced and motionless staring straight ahead as he sat at the opening ceremonies for the Olympic Games just a few feet away from and one row in front of Kim Yo-jong, the sister of North Korean president Kim Jong-un. Why didn’t he at least acknowledge her presence and improve the possibility for some break-through in the stalemate with North Korea over its development and deployment of nuclear weapons and the systems to deliver them? That, after all, is the hope of South Korean president Moon Jae-in for some kind of “Olympic thaw,” the possibility of resuming talks with the north, and the reason President Moon went to such lengths to invite North Korean athletes to join South Koreans in a combined team. The effort is likely to cost South Korea some of the medals it would otherwise have won. But it did result in a letter from President Kim inviting President Moon to visit Pyongyang, conveyed by Kim Yo-jong on behalf of her brother. And President Kim has himself called for “further livening up” the “warm climate of reconciliation” created by the Olympics.

Is the Trump administration rejecting that warm climate and instead cold-shouldering the North? Does it really prefer to break all conversation notwithstanding its regular assertions, including by Vice President Pence himself, that the United States welcomes talks with the north? “If you want to talk, we’ll talk,” Pence said as he exited the venue. But is the United States really just readying itself for a “bloody nose” preemptive strike to the north as a demonstration of U.S. commitment to blunt any North Korean plan to use its newly developed capacities in earnest?

Perhaps Pence accurately conveyed the dark-side plans of the United States, and perhaps he should at least have acknowledged Kim Yo-jong if only as a concession to our South Korean allies. But that is not the simplest or the best reading of the Olympic stadium ballet.

The better reading is the conveyance of a realistic, hard-headed assessment, as opposed to wishful thinking and Pollyannaish hallucination for the results of the Olympic games gambit by the North. It is a way of reinforcing the U.S. and allied effort at massive pressure together with engagement and of the message of Japanese foreign minister Taro Kono that public dreams of peace are a naïve delusion of what he has called Kim’s “smile diplomacy,” especially in light of the military parade with missiles in Kim Il-sung Square on the eve of the Olympic games while his sister was smiling in Seoul. And no doubt Pence’s stare was a way of urging continued, in fact tightened, sanctions on the north by China, Europe, and the rest of the sanctioning countries.

Talks as well as negotiations, both formal and informal, have been ongoing for decades, beginning with Kim’s father, Kim Jong-il and even his grandfather, Kim Il-sung. Formal six-party talks between North Korea, China, South Korea, Russia, Japan and the United States devoted to denuclearizing the entire peninsula began under Kim Jong-il in 2003. They have gone nowhere. Instead, North Korea has used the time to develop its nuclear arsenal and its delivery systems. It can now, or will very soon be able, to deliver a nuclear attack against any of the parties to the talks, most recently to the United States.

A friendly nod, let alone a handshake, between Pence and Kim Yo-jong would have yielded a photo relayed globally. It would have reinforced North Korea’s reason for warming the Olympic flame: to convey globally, but in particular to the publics of South Korea, China and Japan, the (false) impression that North Korea is reasonable and wants peace and that the North, unlike the United States and Japan, embodies the Olympic spirit of peace. It would have been a propaganda gain for the North, which is the real and only intention of Kim Yo-jong’s visit and the participation of the North with the South in a combined “unification” team. And it would have reinforced the naïve misconception that real progress will come from the Olympic spirit when in fact no serious progress is remotely likely.

However, Pence’s stony countenance and demeanor have admittedly delivered a propaganda advantage to the North. A better alternative would have Pence’s turn toward Kim behind him with a bare recognition of her presence, no smile, no handshake, but a recognition. Better yet would have been a request to be seated away from Kim altogether so that no recognition, no photo would have been possible or expected. Someone in the White House should have thought through the optics of the vice president being seated an arm’s length away from Kim at the cost of flinty silence and a perceived snub. Going forward, the United States should be as mindful as Kim Jong-un that the tango with North Korea has an international audience whose opinion will make some difference in deciding how the long-term dance contest comes out. For that reason, the United States should abjure regime change by military force but not, unlike Secretary Tillerson’s avowal, against regime change itself. Quite the opposite, the United States and its allies should reaffirm their position very vociferously that the current regime in the North is an anathema to the values they affirm—except for the use of military force to change borders or regimes apart from very unusual circumstances.

Gerald F. “Jerry” Hyman has been a senior advisor at the Center for Strategic and International Studies and president of its Hills Program on Governance since 2007. From 1990–2007, he held several positions at USAID, including director of its global Office of Democracy and Governance from 2002–2007. From 1985–1990, he practiced law at Covington & Burling in Washington DC, and he taught Anthropology and Sociology at Smith College from 1970–1985. He has a Ph.D. in Anthropology from the University of Chicago and a JD from the University of Virginia.