So Much for North Korea Summit. Now What? 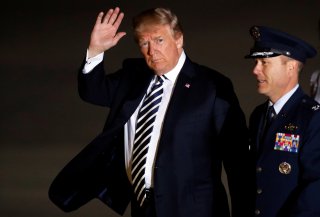 The saga of the U.S.-North Korea talks resembles a soap opera with nuclear weapons. But in following the unfolding relationship between The Donald and the Rocket Man, anyone who expected anything other than a roller coaster bought a ticket to the wrong ride.

Today, the whole world will be on spin cycle, as commentators assess the implications of Trump’s letter canceling the talks. But, as was the case in 1986 when Reagan walked away from Reykjavik, so Trump’s letter will likely not be the last word in the bid to ease tensions on the Korean Peninsula.

Tit-for-tat name calling aside, the letter reflects that Trump determined the North Koreans were interested in deploying nothing more at the Singapore summit than its usual rope-a-dope diplomacy. That, he decided, is not a good enough reason to hand out commemorative coins. And, so, he pulled the plug.

One assessment holds that the president was naïve from the start, ignoring advice that the North Koreans would never be serious about unilateral nuclear disarmament. An alternative read, consistent with what he has done in the past, is that Trump sees himself as an unconventional statesman, willing to test conventions. He was willing to offer talks to see if Kim was serious about doing something else.

Over the last few weeks, the North Koreans sent enough signals to convince Trump that they were not serious. He opted to put off the talks—until he feels comfortable the North Koreans are willing to do something better. The White House probably thinks this is better than Reykjavik—they have saved themselves a long plane flight.

The question is: what next? Trump’s letter was open-ended. He didn’t foreclose the possibility of further talks. In short, this doesn’t look like a major change in U.S. policy. In near term, we’ll maintain maximum pressure on Pyongyang and leave the prospects for diplomacy open. That certainly seems feasible.

After all, what’s really changed? America’s vital interests lie in preventing a war in Northeast Asia and keeping the DPRK from directly threatening the United States. A strategy of nuclear deterrence, missile defense, conventional deterrence with our allies, and serious sanctioning seems suitable.

The virtue of the strategy is that it protects U.S. interests regardless of the course of diplomacy—whether Kim wants to be a real partner for peace or not. It is also sustainable. The strategy doesn’t require the willing cooperation of China and Russia, and those two countries will never to do more than the minimum they can get away with anyway.

Our allies will no doubt stick with us. In the end, there is no better option to protect them from North Korea.

Japan is probably happy the talks are off. Tokyo doubtless worried that the United States might give Pyongyang too much.

The South Koreans are no doubt deeply disappointed. They, however, should be angry with North Korea for squandering a historic opportunity with feckless behavior. The North Koreans had already walked out on a negotiating session with the South, even before they started trashing the U.S. vice president. If they were serious about negotiating, then they should have treated the prospects of talks more seriously and not just relapsed into their typical “bad boy” behavior.

What is important to recognize—and what all sides no doubt do recognize—is that the cancellation of an iffy summit does not trigger Armageddon. The opposite of talking is not talking. It is not war.

When all sides are tired of not talking, they’ll talk.