A Solution For Syria and the Kurds That Turkey and the U.S. Can Agree On 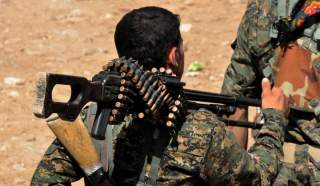 How to reconcile the approaches of Turkey and the United States over Syria? Both countries seek to depose President Assad while defeating ISIL, and also while reducing the terrible humanitarian plight of the Syrian people which has, among other effects, sent nearly two million refugees onto Turkish soil. But Ankara, wary of its own Kurdish population and particularly the militant PKK, which espouses violence in the pursuit of potential independence, is extremely reluctant to see Syrian Kurds armed and otherwise assisted by Washington. Alas, the Syrian Kurds, mostly aligned with the PKK, appear to be the only element of the so-called moderate opposition gaining any real traction, or showing any real military competence, within Syria. To lose the ability to work closely with them may, among other things, call into serious doubt Washington’s aspirations to help Syrian moderates mount a campaign against Raqqa, the capital of the region now controlled by ISIL. What a mess.

There are no easy answers here, but there may in fact be a plausible path forward—a strategy that, if Washington were to adopt it, could assuage many Turkish concerns and lead to gradual progress in the campaign to put real military pressure on both ISIL and the Assad regime.

The first element of the new strategy begins with a more realistic framing of the military goals of the international coalition opposing both Assad and ISIL. Washington must take the lead on this. The starting point is to begin with a vision for the future of Syria based on confederation.

Declaring such a goal could help reconcile, or at least “deconflict,” American and Turkish views on the conflict. By now, it must be clear that aspiring to a strong successor government to the Assad regime is to hope for a miracle.  Even if such a government could be constructed on paper, what army is going to give it authority? The current Syrian army is too tainted by Assad’s barbarism; the various militias in the country are too fractured and weak; ISIL itself must be defeated, so its fighters cannot be part of any solution. One reason Turkey does not trust the United States now in the conflict is that Washington’s stated goals are so out of kilter with the means it is willing to devote to the effort. A confederal model for Syria, though still ambitious, could help reduce the chasm between ends and means, making the strategy more credible.

A weak central government, tying together various separate sectors of the country that are governed and protected by their own autonomous institutions, makes much more sense. Confederation doesn’t mean the partitioning of Syria. In fact, a confederal solution is probably the best way to avoid disintegration. Such a concept could, among its other virtues, provide an outlet for Assad (he could go into internal exile in the future Alawite sector of the country). It could cap any aspirations among Kurds for self-rule well short of the possible goal of independence—the latter being something that Ankara would find fundamentally unacceptable. It could also provide a viable path forward for Russia—as principal protector of the Alawite sector in a future peacekeeping mission, after an eventual negotiated settlement.

As for the specific matter of the Kurds, additional steps are needed. The PKK needs to commit not to employ violence against Turkey any longer—not now, not in the future. But it can be given a new role, for those of its fighters seeking to stand up for their own people in a responsible way: as part of the Kurdish opposition within Syria. The PKK can be allowed safe passage into northern Syria, where its fighters can join the PYD militia there. They can help take on ISIL in support of the campaign now being envisioned against Raqqa as well as other missions. In return for the PKK’s demilitarization in Turkish territories, Ankara should immediately restart negotiations with the organization and this time quickly deliver on its promises of reforms.

There is one more key piece to this: American special forces would need to deploy on the ground too, building further on the very modest but welcome decision to several dozen Americans into Northern Syria.  The Kurdish zone in Syria is reasonably well-established, so the risks associated with this move are likely manageable. The special forces would help further recruit, train, equip and advise these fighters as they work with nearby Arab units to prepare the next steps in the war. In addition to strengthening the Kurdish forces, the Americans would help monitor the custodianship of any weapons that were delivered to these units to help ensure they were not taken back into Turkey. The American commitment would have to be open-ended, until the conflict could be brought to a reasonable settlement. But it would not be large.

None of this is easy or particularly appealing. But neither is any dimension of the Syrian war. Right now, it is a war we are collectively losing. We need a new path forward, and the starting point has to be one that Turkey and the United States can truly rally together behind.

Omer Taspinar is professor at the National War College in Washington, DC and non-resident senior fellow at Brookings.