A Solution for the Iranian Uranium-Enrichment Puzzle 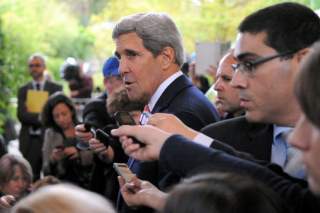 With less than two weeks before their July 20 target date, the negotiating teams of the United States and other great powers are working full time on the text of a comprehensive agreement to guard against a nuclear-armed Iran.

Progress has already been achieved on several key issues—strengthening International Atomic Energy Agency (IAEA) inspections and oversight at existing and undeclared sites; Iran has agreed to modify its Arak heavy-water reactor to drastically cut its plutonium output; and a general framework has been developed to waive and eventually lift sanctions against Iran. Nevertheless, the two sides have more work to do to bridge differences on the most difficult issue: limiting Iran's uranium-enrichment capacity.

Iran’s enrichment program has been the focus of international concern for more than a decade because gas centrifuge machines can be used to enrich uranium not only to normal reactor grade—with 3.5 percent fissionable uranium-235—but also to weapons grade, which is 90 percent U-235.

After talks between European powers and Iran broke down in 2005, Iran increased its centrifuge capacity from 300 first-generation IR-1 machines at one site to about 19,000 centrifuge machines at two sites.

Today, about 10,200 of the first generation centrifuges are operational. Iran has also installed 1,000 advanced IR-2M centrifuges, which are 3-5 times more efficient, at the Natanz enrichment plant but they are not yet operational.

Iran’s operating IR-1 machines could theoretically allow Tehran to enrich natural uranium stock into a sufficient quantity of uranium gas enriched to weapons-grade for one nuclear bomb (25 kilograms) in about six months if such an effort were not detected first. If Iran did try to build a militarily significant nuclear arsenal, however, it would take considerably more than a year to amass enough weapons-grade uranium gas for additional weapons, convert the material to metal form, assemble and test a nuclear device and mate the bombs with an effective means of delivery.

As part of a comprehensive deal, Iran and the P5+1 should be able to agree on several simple steps to constrain Iran: limit uranium enrichment to levels of less than 5 percent; keep stocks of its enriched uranium near zero; and halt production-scale work at the smaller Fordow enrichment plant and convert it to a research-only facility.

But the two sides must still find a formula that limits Iran’s uranium-enrichment capacity at the larger Natanz site in a way that prevents Iran from producing enough highly enriched uranium gas for weapons too quickly, but allows for Iran’s “practical” civilian needs, as the November 24 interim agreement between Iran and the P5+1 puts it.

For the next several years, Iran’s practical needs are limited. Iran’s Tehran Research Reactor produces medical isotopes, and Iran already has enough material to fuel that reactor for years to come. If the Arak reactor is modified to use 3.5 percent enriched uranium fuel, it might require no more than 1,000 first generation centrifuges to provide for its fuel requirements.

Iran also operates a 1,000-megawatt electric light-water power reactor at Bushehr, which uses fuel supplied by Russia under a ten-year arrangement that could be renewed in 2021. The arrangement obliges Russia to continue supplying fuel unless Iran chooses not to renew the fuel-supply contract. Iran is in talks with Russia to build and supply up to four additional nuclear power reactors, with the first possibly completed eight years from now.

Yet, Iranian negotiators oppose indefinite restrictions on their uranium-enrichment program. They insist that their country's nuclear-fuel needs may increase and say they cannot depend on foreign suppliers given the unreliability of these suppliers in the past. It is estimated that Iran would need about 100,000 first-generation centrifuges to provide fuel for Bushehr.

Negotiators can square the circle with a combination of additional measures that should be acceptable to both sides. These measures would increase the time Iran would require to produce enough weapons-grade material for one bomb—to 9-12 months or more—and still would provide Iran with more than sufficient capacity for its civil nuclear program.

●Limiting Iran's enrichment capacity for 6-10 years at, or below, its current capacity—but allowing for appropriate increases in Iran's uranium-enrichment capacity in the later stages of the deal if Iran provides sufficient information to the IAEA to prove that any past experiments with possible military dimensions have been discontinued and if Iran demonstrates that it cannot obtain foreign nuclear fuel supplies.

●Agreeing to phase out, remove and store under IAEA seal Iran’s less efficient, first-generation IR-1 centrifuges and, over a period of years, replace them with a smaller number of more-efficient centrifuges. During the transition period, the total operating enrichment capacity would be held below agreed limits, ideally less than Iran's current capacity. This would allow Iran's scientists to make the desired transition to more cost-effective machines over time, but still constrain Iran's overall enrichment capabilities.

●Agreeing not to assemble the more-efficient centrifuges until there is a demonstrable need for commercial-scale enrichment. This would increase the time it would take Iran to operate the machines, and provide added insurance against rapid breakout scenarios.

●Providing strong P5+1 nuclear fuel-supply guarantees to Iran to help meet its future nuclear energy and research needs. Such guarantees could include predelivery of fuel for Iran’s Bushehr light-water, electricity-producing reactor before the current fuel-supply contract with Russia ends in 2021.

Iran would also have to agree to additional on-site inspections under the terms of the IAEA additional protocol, including its centrifuge production workshops. These are essential to provide confidence that Iran is meeting its obligations and is not pursuing undeclared nuclear activities.

Concluding an effective, comprehensive agreement will require difficult compromises from both sides. But solutions that prevent a nuclear-armed Iran, lower the risk of yet another major conflict in the region, and still provide Iran with the means to pursue a realistic, peaceful nuclear program are within reach.