Solved: How to Get U.S.-Israeli Relations Back on Track 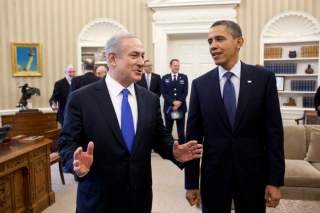 One significant example was the “reassessment” of U.S.-Israeli relations President Gerald Ford decided upon forty years ago, in order to force Israel to disengage with Egypt in Sinai in 1975. In retrospect, maybe the United States and Israel can learn from this episode that a reassessment is not always bad for Israel and for the mutual relationship, and in the long term, it can be healthy for building a sustainable relationship between the two states.

The current crisis is a result of principal differences on major policy issues, mainly on the ways of resolving the Israeli-Palestinian conflict and dealing with Iran, as well as escalating personal enmity between two leaders whose relations are marked by a growing distrust and aversion to each other.

The perceived Netanyahu withdrawal from the two-state solution puts him on collision course with traditional U.S. policies on this issue. Netanyahu’s attempts to derail the nuclear agreement with Iran is also a cause of tension between him and Obama. This personal animosity is born from a mutual distrust and the perception on the part of both these leaders that the other leader is collaborating with his domestic political enemies to bring him down. Additionally, there is a mutual lack of appreciation for the performance of the other leader. Netanyahu and his people believe that President Obama and his staff completely misunderstand the Middle East, and that his naive policies are weakening U.S. influence in the Middle East, and by extension, harming the interests of Israel. On the other hand, Obama and his staff believe that Netanyahu lacks credibility, his promises are meaningless and that he is insolent. They perceive his policies as harmful to U.S. interests, conflicting with traditional U.S. policies, and damaging to perceptions of the United States in the Middle East. They also believe his policies are harmful to the real interests of his own country.

Obama’s team sees Netanyahu’s political conduct as being based on deceit; for example, Netanyahu was for a two-state solution in his Bar-Ilan speech in 2009, but ultimately he was not sincere about that. Netanyahu is also perceived as willing to break any rule to intervene in domestic U.S. partisan politics.

Another major source of controversy is in perceived differences in approaches to human rights and democracy. This is reflected in the U.S. perception of past legislative initiatives by Netanyahu’s government to limit human-rights and judicial oversight, and by assertions made by Israeli political leaders from the right wing, including Netanyahu himself, in the election campaign. A striking example was Netanyahu’s racist insinuation against Israeli-Arab citizens during the past election when he implied that votes from this group were votes against Israel. This controversy is significant because one of the foundations of the U.S.-Israeli relationship is a perception of common values.

It is not yet clear whether President Obama intends to reassess the U.S.-Israeli relationship only in the context of the Palestinian issue or in a broader context, but even if the original intention was to reexamine U.S. policies on the Palestinian issue, the reassessment might slide to other areas as well. Actually, it might be a good opportunity for the two allies to clear the atmosphere on a range of subjects by asking the new Israeli government to make a choice between clear policy alternatives. If it still supports the two-state solution as Netanyahu argues now, than its actions should correspond with this choice, and if it wants the United States to deal with Iran’s nuclear program, it should cooperate wholeheartedly with the American administration’s efforts to do so.

President Obama will probably stick with his consistent policy of not letting his disagreements with Israel affect the security relationship between the two states. He understands very well that only a secure Israel will be willing to take the risks inherent in any attempt to solve the big problems of the region, whether it is the Palestinian question, the Iranian nuclear program or the problems bred by the turbulence in the Middle East.

The Obama administration’s reassessment should encourage a dialogue with the new government of Israel on the Israeli-Palestinian political process and on the Iran nuclear negotiations. The first impulse would be to assume that the combination of disagreements between the United States and Israel, as well as the narrow right-wing coalition government led by Netanyahu, will lead to worsening relations between the two countries, which would lead to difficulty in engaging in useful dialogue and frequent crises. However, deeper analysis of this scenario might lead to other conclusions. Netanyahu is acutely aware of the vulnerabilities of narrow right-wing government domestically and vis-à-vis the external world.

Concerning the Israeli-Palestinian negotiations, the U.S. government will have to decide how it is going to deal with the lull in the negotiations, the mutual disbelief of the two communities in their utility and the unwillingness to resume them. It should understand that even if by some magic trick, negotiations could be resumed, they would probably end again with nothing to show. Consequently, the United States should stop pursuing the resumption of permanent status negotiations as the main goal and adopt another goal, which is not a complete resolution of the Israeli-Palestinian negotiations on the basis of the two-state solution, but rather the maintenance of the idea of the two-state solution and its feasibility, while waiting for better times to implement it fully. There are currently two threats to the viability of this solution that are not dependent on the specific political situation. The first one is the general despair of the possibility of implementing this idea. The second threat is the gradual, consistent slide towards the reality of a one-state solution that may become irreversible. Physically, it may not be possible to implement a two-state solution because, for example, there are too many settlers that need to be evacuated or because the Israeli and Palestinian systems are too integrated.

It would be good if the reassessment led the Obama administration to demand that Israel prove its sincerity in supporting the two-state solution by accepting a three-pronged approach:

– Focus on preventing the slide to a one-state reality from becoming irreversible by substantially limiting settlement activities and by implementing limited steps that will improve the situation of the Palestinians and continue the Palestinian state building project. Emphasis should be put on expanding Palestinian authorities and activities in parts of Area C that comprises 60 percent of the West Bank’s territory.

– Cooperate with efforts to deal with the wild card, Gaza, which is threatening to derail any attempt to stabilize the Israeli-Palestinian relationship. The United States should help coordinate among Israel, Egypt, the Palestinian Authority (PA), and the Gulf States in order to come up with a plan aimed at stabilizing Gaza. The main elements would be more reconstruction and economic revival and the return of PA elements.

– Build the infrastructure for the resumption of effective negotiations when political conditions are amenable. In this context, a new UN Security Council resolution on the principle of a permanent status agreement should be considered. The resolution should anchor the progress that was made in different past negotiations tracks and lay principles for the necessary compromises that should be adopted on the issues that the parties have not yet reached agreement on.

These ideas will help to keep the idea of the two-state solution as the only solution supported by the international community alive. Whatever the results of the Iran negotiations—the conclusion of an agreement or a failure to reach one—Israel will have to reconcile with these results and deal with their consequences. Already, there is a strong possibility that Israel is internalizing the possibility of an agreement. In order to deal with these consequences, Israel needs the United States. Similarly, the United States needs the cooperation of Israel to effectively handle the results of any nuclear deal with Iran. Imperfections in an agreement might raise the level of anxiety among U.S. allies in the Middle East including the Gulf States and Israel. Thus, U.S. safeguards and scenarios of Iranian noncompliance (and consequences for this) should be discussed. This would also be an opportunity to discuss regional security stability and structures that would enhance the security of U.S. allies including U.S. assurances and security cooperation.

A failure to reach an agreement might have similar results. It will bring about the full resumption of the Iranian nuclear project in addition to further difficulties in maintaining and expanding the sanctions regime. This will also increase feelings of insecurity among U.S. allies and push them to adopt risky solutions. There will be ample reasons for a discussion between the United States and Israel on these challenges and the necessary responses in all scenarios. Suitable mechanisms and communication channels should be developed by the United States and Israel in order to have these discussions. It will not be easy because of the burden of the bad personal relations, but it is possible. There are precedents in the history of U.S.-Israel relations for dialogue under similar circumstances.

Finally, it is too early to determine the level of damage accrued to the U.S.-Israeli relationship, and much can still be corrected. However, there are areas in which it will be difficult to put the genie back in the bottle. Partisanship is here to stay. Netanyahu further pushed away from Israel Democratic lawmakers as well as progressive Americans in general, and that includes important segments of the U.S. population such as the educated young and African-Americans. If the new Israeli government wishes to minimize long-term damage, it should make a sincere effort to enhance its credibility as an ally, increase cooperation with the administration and not try to bypass it.

Israel and the United States should not miss the opportunity to engage on all issues in a manner that will put the relationship back on track to the greatest extent possible, while taking into account the political constraints of both sides. Both sides ought to develop realistic ways of dealing with the common challenges they face.

Brig. Gen. (ret.) Shlomo Brom is a Senior Fellow at the Institute for National Security Studies in Tel Aviv and a Visiting Fellow at the Center for American Progress.

Amb. Shimon Stein is a Senior Research Fellow at INSS and a former deputy director general of Israel's Foreign Ministry, and ambassador to Germany.