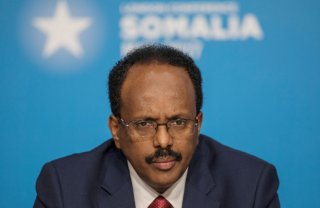 A month after Somali president Mohamed Abdullahi Farmaajo’s term expired, Somalia remains without a legitimate government and the country is descending deeper into political chaos. As protestors prepare to take to the streets, Somalis wear masks emblazoned with “Down with the Dictator.” Farmaajo now deploys security forces not against al-Shabaab terrorists as international funders intended, but rather against political opponents seeking to rally for free elections. Meanwhile, al-Shabaab acts unrestrained. On March 5, a car bomb struck a popular restaurant in the capital, killing at least ten. Somalis suspect that Fahad Yasin, Farmaajo’s intelligence chief who has maintained tight personal relations with al-Shabaab, was complicit in the attack in order to provide Farmaajo with an excuse to crackdown.

In her book, Aiding and Abetting: U.S. Foreign Assistance and State Violence, American University professor Jessica Trisko Darden persuasively shows that foreign aid often does more harm than good. While she does not include Somalia in her case studies, the country’s experience reinforces her thesis. The United States and the broader international community have provided Somalia with more than $50 billion in aid and assistance. Rather than enable Somalia to recover, the money has had a corrosive effect on Somali political stability and is in part responsible for the current crisis.

U.S. Ambassador Donald Yamamoto and UN special representative James Swan, himself a former U.S. ambassador, have both direct aid to Mogadishu on the theory that such money could build legitimacy for the central government by allowing its leaders to dispense patronage. In reality, the flood of funding had the opposite effect. Not only did it catalyze Somalia’s corruption—Transparency International has ranked for the past decade Somalia as the world’s most corrupt country—but it also increased instability as Farmaajo has weaponized aid to consolidate dictatorship. By funding Somalia lavishly and without accountability, Yamamoto and Swan have unraveled all that the international community had achieved over the past fifteen years in efforts to rebuild a constitutional system governed by rule-of-law.

It is a dynamic Somalis recognize. Abdi Samatar is one of Somalia’s most prominent scholars. He received his Ph.D. from Berkeley, taught at both the Universities of Iowa and Minnesota, and ultimately served as the president of the African Studies Association. In 2017, he served as head of the commission overseeing the integrity of the presidential elections that led to Farmaajo’s rise. On Feb. 24, 2021, he gave an interview with Horseed Media, an independent outlet based in Puntland, in which he addressed the confluence between Farmaajo’s weaponization of aid and corruption:

I heard from the U.S Embassy that the U.S government extended millions of dollars to the regions. The Embassy handed over the money to the Presidency and they came to know that the money has been given to Hirshabele, to Baidoa, and to Dhusamareeb. But Puntland and Jubaland received only part of their shares. The Embassy told me that they do not know what happened to that remaining part of that money. So, the government is begging for money and when they receive it they steal part of it.

It is no coincidence that Farmaajo’s allies control the states to which Farmaajo transferred cash but his opponents lead those to which he did not.

The scale of the problem is immense. In 2017 and 2018, Somalia received about $2 billion in official development assistance, largely for humanitarian aid. This number does not include the large sums spent on security, for example, in support of the African Union Mission to Somalia (AMISOM). On September 5 and 6, 2018, the World Bank and European Union provided 100 million euros and $150 million in grants for budget support paid directly into Somalia’s Treasury. The donors did not insist that Mogadishu share the money that they had intended to support all Somalis.

According to Somalia’s Federal Ministry of Planning, Investment and Economic Development, Somalia received $3.358 billion in aid in 2019, but this figure excluded assistance from the Arab League, China, Qatar, Saudi Arabia, the United Arab Emirates, Turkey, and the Islamic Development Bank. In effect, Farmaajo’s Treasury has become a black hole. Where the money went is unclear; all that is known is that it did not reach Puntland, Jubaland, or Somaliland.

In the first part of 2020, the World Bank/International Development Association provided Somalia an additional $700 million. None has reached Somaliland which Farmaajo now tries to starve into submission. While there is increasing recognition by the World Bank and other donors that Somaliland—one-third of Somalia before its 1991 secession—should get a proportional share of resources donated to Somalia as the international community continues to recognize it as part of Somalia, and while Somali representatives blessed that notion. Farmaajo has instead embezzled the money meant for Somaliland in order to undermine Somaliland’s security and government structures. Instead of receiving one-third of donated funds, Farmaajo has released only one-fiftieth.

Somalis will no longer accept dictatorship, but that is what Swan and Yamamoto are effectively helping Farmaajo to build. As Samatar related, “I met Jim Swan two times. He talks to the people like the colonials used to talk to them. I urge the Somali people to tell him to leave . . . He wants to force the people to accept decisions with no consensus.”

Stability in Somalia depends upon such consensus. But true consensus cannot be reached only in Mogadishu; rather it mandates true respect for both Somalia’s federal states and Somaliland. This, in turn, requires that the aid be distributed in proportion to each state’s population. That Farmaajo is unwilling to accede should be irrelevant: he is no longer president. But should he or his successor continue to weaponized aid, then the solution is simple: bypass Mogadishu and provide humanitarian and development assistance directly to Somaliland and the federal states. If Somaliland, Puntland, and Jubaland are any indication, then they have the capacity to use it more efficiently anyway. If the World Bank, State Department, and other donors continue business as usual, then Somalia will not be able to recover; instead, it billions of dollar will be wasted and the country will be condemned to civil war.

23 Years After ‘Black Hawk Down,’ America Is Back at War in Somalia