Some U.S. Military Leaders Think Some Extremism Is Better Than Others 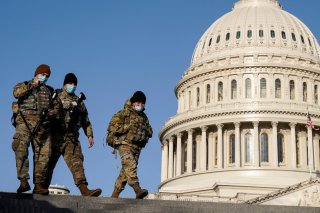 The Pentagon has a problem. Troops throughout the armed forces aren’t going along quietly with programming designed to educate them about “extremist” views and activities. The problem, says military leadership, is that too many enlisted personnel are wondering why last year’s violence fueled by Black Lives Matter isn’t viewed by their superiors as negatively as the riot at the U.S. Capitol earlier this year.

“This is coming from every echelon that we’re talking to,” said Senior Enlisted Advisor to the Chairman of the Joint Chiefs of Staff Ramón Colón-López. “Some people may think that, ‘all right, so the events of 6 January happened. How come you’re not looking at the situation that was going on in Seattle prior to that?’”

Colón-López presumably means the Nakamura Federal Courthouse in Seattle, Washington. Last summer, protestors broke into the building, burned an American flag, and graffitied the interior and exterior. Though there were many similar cases across the country by Black Lives Matter agitators, the most important task is ensuring “military members understand the difference between Seattle and Washington, DC,” Colón-López said.

It’s hard to escape the impression that the Pentagon only cares about violence when it’s in its backyard. More to the point, in this view, very few of the individuals who partook in rioting last year can truly be considered extremists, but every single person who entered the U.S. Capitol is a dyed-in-the-wool radical. And what exactly comprises the military’s “extremist” education anyway? One slide shown to soldiers by the Army lumps together the Proud Boys and fans of Pepe the Frog memes with the Waffen-SS. Navy slides obtained by Breitbart News associate extremism with political incorrectness and other concepts the Left exclusively ascribes to the Right. Sailors are also informed that while they are members of a “non-political” institution, it is not politically partisan to support Black Lives Matter in uniform.

“My boss is always talking about Black Lives Matter,” a question reads on the slide. “Isn’t that political stuff that they’re not supposed to be talking about at work?” The answer is that some political positions are less political than others. “Advocating for or against a public policy issue (as here) is authorized as long as the behavior is otherwise lawful and the advocacy is not politically partisan in nature (e.g. it doesn’t specifically address a political party),” sailors are informed. “If the discussions make you uncomfortable, discuss the matter with your boss or another supervisor.” Those bosses and supervisors are the same ones aggressively dogpiling civilian critics of the Pentagon’s left turn, so it’s unlikely their subordinates would fare better.

It’s worth comparing Washington’s Black Lives Matter riots to what happened at the Capitol Building to see just how partisan and, ironically, extremist military leadership has become in its political outlook.

Nightly waves of violence reached a peak in early June when protestors set fires across the city, giving DC a red glow blanketed with thick black smoke. American flags pulled from buildings, road signs, and plastic barriers became fuel for raging bonfires in the streets. Barrages of tear gas and stun grenades scattered thousands of protesters only for as long as it took them to regroup and resume rampaging. At least 150 local and federal officers sustained injuries during the first week of protests in DC. “The nation’s capital is legitimately on fire in every direction,” journalist Samantha-Jo Roth tweeted with an aerial picture of flames pulsating through the streets and smoke swallowing the Washington Monument. “This is unreal.”

In Washington and elsewhere, National Guard troops showed solidarity with and even kneeled before agitators. One soldier in Washington whispered “I'm black and I'm proud” as demonstrators shouted the chant. According to defense reporter Matthew Cox, National Guard leaders did not see why they should punish soldiers for kneeling and thus participating in partisan activities in uniform.

The riots ultimately resulted in several deaths and scores of injuries nationwide. The body of one man was found in a pawnshop that was razed during the protests in Minneapolis, Minnesota. His death is considered a homicide. In St. Louis, Missouri, looters killed retired police captain David Dorn while he guarded a friend’s shop. By the end of 2020, the insurance industry was staring down $1 billion to $2 billion of paid insurance claims for vandalism and looting—making Black Lives Matter riots among the most destructive in American history.

Suppose it’s true, as Colón-López said, that only a small contingent within a much larger body of peaceful protestors bears the blame for last year’s mayhem. In that case, it is an even greater mystery why dealing with these people and their enablers isn’t one of the highest national security priorities. After all, the national Black Lives Matter foundation raised more than $90 million in 2020. Adjacent groups like the Minnesota Freedom Fund saw donations skyrocket with the Black Lives Matter movement’s rise. Among those bailed out by the organization are a registered sex offender accused of raping an eight-year-old girl, a suspect who shot at police, and a woman accused of killing a friend.

Compare this to the crowd that participated in the riot at the U.S. Capitol.

Not one person entered the Capitol Building with a firearm. Most of the charges related to the incident are for disorderly conduct and trespassing. The only homicide case involving the death of Capitol Police Officer Brian Sicknick has fallen apart. “Investigators are struggling to build a federal murder case regarding fallen US Capitol Police officer Brian Sicknick vexed by a lack of evidence that could prove someone caused his death as he defended the Capitol during last month’s insurrection,” CNN reported. Journalist Julie Kelly noted that the New York Times quietly issued a retraction of its Sicknick story due to a lack of evidence pointing to murder. Among the “extremists” who bumbled through the halls of the Capitol are firefighters, veterans, police officers, a two-time Olympic gold medalist swimmer, and the owner of a flower shop. Their lives will likely be ruined, and the Minnesota Freedom Fund will not be there to help when the ax comes down.

It is strange to see men like Colón-López, a decorated combat veteran, serve as the enforcers of a terrible system. But that is a testament to the coercive power of its underlying ideology, one that has spurred the defacement and destruction of monuments and buildings honoring our nation’s heroes like the Nakamura Courthouse in Seattle.

Private First Class William K. Nakamura distinguished himself by extraordinary heroism in action on July 4, 1944, near Castellina, Italy. Nakamura crawled toward a fortified enemy position under withering fire and dispatched with grenades a machine gun nest that had pinned down his platoon. He died while assaulting another machine gun emplacement and posthumously received the Medal of Honor.

Today, military brass kowtows to an ideology that dishonors and attempts to destroy the things for which men like Nakamura gave everything. Why they do it is less important than the fact they do at all. This raises serious questions no one seems to want to ask. How can a military protect a country when its leaders view the populace from which it draws the rank and file as fundamentally evil and in need of reeducation? And who would give their life for this? These are “very, very tough conversations,” as Colón-López put it, that military leaders don’t want to entertain.